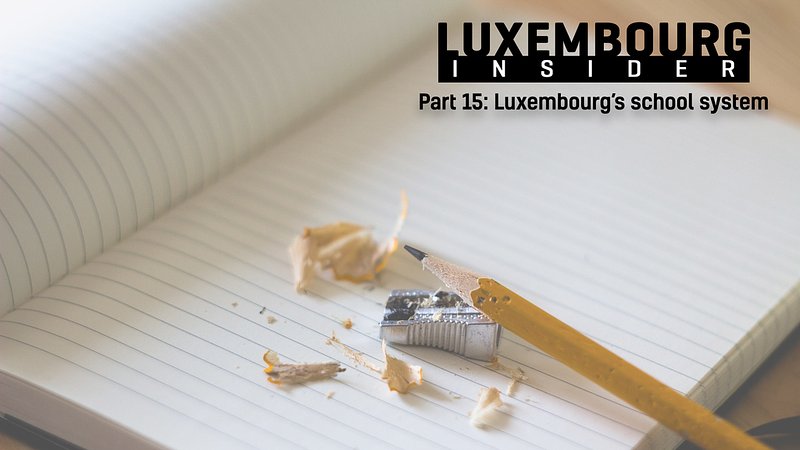 Well, this was a daunting task - Luxembourg's school system is pretty complex, and the information available (in French and German, mind you) is rather comprehensive. It's also nicely spread across dozens of pages. All in all, I had a lovely weekend - thanks for asking.

As ever, the good news is that this article will (hopefully) make it easier for you to get a grasp of how the school system works. In this article, which is the first but not last article - there will be at least one more, as I fear this would otherwise turn from an article into a book - you can expect to learn:

There will also be links. Lots of them. Now, grab your notepad and packed lunch, kiss you mum goodbye, and let's do this thing.

When and where to enrol

Schooling is compulsory between the ages of 4 and 16, so all children between these ages must be enrolled at a school (though it does not have to be a state school, which is what I am going to focus on in this article - more on private school options will follow).

For pre- and primary school (ages 3 to 11) you should contact your local "commune" (municipality). They will have all the information you need to get signed up and get an overview of how primary education works (a bit more on this in the next section).

It's important to note that Michel Lucius follow the Cambridge Primary Curriculum, while Differdange follow the European curriculum. As such, if having your child(ren) attend either of these schools is an option for you geographically, you should first research which curriculum best aligns with your particular needs and preferences.

For secondary school (ages 12 and up) you should contact CASNA (Cellule d’accueil scolaire pour élèves nouveaux arrivants). They are part of the ministry of education, and provide information about Luxembourg's school system and the options available for pupils who primarily speak a foreign language.

CASNA is located at Maison de l'orientation, 58 boulevard Grand-Duchesse Charlotte, L-1330, Luxembourg City. Do note that they are open by appointment only.

For a small country, Luxembourg's school system is comprehensive and complicated. The state schools offer a range of different curricula, taught in several different languages.

The ministry of education (MENJE) has published a fairly comprehensive guide to Luxembourg's school system in English. The diagram on page 5 of that booklet is particularly useful (and confusing at first glance) as it provides you with an overview of Luxembourg's school system and the various streams available.  They have also put out a PDF which gives you an overview of the international school/curriculum options available.

One quirk you may note here is that the years in the Luxembourgish system go from 1 to 6 (or cycles 2 to 4) in primary school, but backwards from 7 to 1 in secondary. Don't ask me why.

If you look at the diagram mentioned above, you will note that there are essentially three options available for primary school - Luxembourgish primary, "UK-style" (key stages/KS, leading to A-levels) primary, or "European education" (leading to a European Baccalaureate).

Cycle 4 is particularly important as your child's performance at this stage (also true for equivalent UK/EU stages at age 11) will determine the options available to them for secondary school.

This is where things get a bit more complicated, because there are a multitude of options available. Again, it might be a good idea to take a look at the diagram (page 5). As noted earlier, I'm focusing predominantly on the options available within the Luxembourgish system in this guide.

Depending on your child's results, they will have access to one or more of the following options:

Within the Luxembourgish system, only two diplomas will give your child access to university education - these are Diploma of classic secondary education and Diploma of general secondary studies. Those of you who have been here a while may know these by former associated school names, being "lycée classique" and "lycée technique".

The term "technique" is no longer in use, and the vocational stream is now called general secondary (secondaire générale). It is important to note that it is generally not possible to change streams - that is to say, if your child is enrolled in the stream that will lead to a professional aptitude diploma, they cannot change to for instance the technical diploma-stream without going back to an earlier year of study. This is because there is only limited overlap between courses and material taught, so your child would not have the prerequisite knowledge required to change streams.

Academically inclined students who have done well in primary school may, should they and you wish, go to the down one of four academically intensive routes:

Following the UK's GCE curriculum, A-levels are taught in English (with French and German as second and/or third languages) and are offered by Lycée Michel Lucius in Luxembourg City.

This internationally recognised curriculum is available in two schools in Luxembourg. Lycée Technique du Centre in Luxembourg City teach it in French, and Athénée de Luxembourg, also in the City, offer an English version. You can find a list of schools (including private ones) that offer IB here.

This is the most academically intensive option available within the Luxembourgish curriculum, and requires an excellent level of both French and German from the first year on.

Students who are less academically inclined or who wish to focus more on practical skills and getting ready for the job market may opt for one of several vocational streams. These are what used to be called "lycee technique," but are now called general secondary education. That said, the diploma of general secondary studies (ESG) is less vocational than the others, and does have more of an academic focus.

The streams available after the first three years vary quite widely in content and focus on academic skills, and I will present them in order of entrance requirements (from higher to lower grades). Only the first one prepares students for higher education at university.

This is the most academically intense stream under the general secondary education umbrella, and unlike the three other streams does prepare the student for further education at university. Students who graduate with this diploma are generally able to apply to and get a spot at university, assuming they meet the basic course criteria for the specific degree they wish to pursue of course.

The courses are a bit more narrowly focused than those taught under the classic stream, and might include e.g. nursing, social work, accounting, IT, and hospitality.

Completion of this stream provides graduates with access to the job market as a qualified employee in their area of specialisation. Further training is also a possibility, but they will have to complete preparatory modules first.  Available specialisations include administration and commerce, accounting, tourism, art (design), construction, IT, and mechanic subjects.

During the course of this stream students acquire the basic social and vocational skills required for getting a job. Further study will require that they first complete a higher level of secondary education. Specialisations include e.g. agriculture, assistant florist, assistant cook/baker/butcher, and construction at the assistant level.

The list of specialisations for each level is rather long, and the above are just broad examples.

Moving here after starting secondary school presents certain difficulties, but they are far from insurmountable and you will be glad to hear that the Luxembourgish school system is prepared to offer several different options. The routes available depend on the child's level of German and/or French.

Students between 12 and 14 who are of a high academic level but don't speak French or German may, dependent on passing an entrance exam, be offered an insertion class where they are taught French or German intensively.

Students between 12 and 15 years of age who do not speak French or German may be admitted to 'ACCU' (which stands for accueil, meaning welcome), which is a welcome class that offers intensive French lessons and basic Luxembourgish.

Students between 16 and 17 years of age, meanwhile, may join a 'CLIJA' insertion class for young adults. Here they will receive intensive French lessons and classes tailored at preparing them for general secondary education, vocational training, or the job market.

That said, the routes available depend on the curriculum they wish to follow and the school they want to attend. You should consult CASNA upon arrival, as noted in the above section title "when and where to enrol".

I have provided quite a few links above, and those are a good start. The most valuable resource I have linked to is arguably the English-language guide to Luxembourg's school system offered by the ministry of education. I can't recommend it enough, but it does lack detail on the specialisations available within the various secondary school streams. Unfortunately I have not been able to find that in English, but there is a good guide in French that should be fairly understandable and at least offers an overview.

As mentioned several times already (but it bears saying again), CASNA is located at Maison de l'orientation, 58 boulevard Grand-Duchesse Charlotte, L-1330, Luxembourg City. The link above is, unfortunately, in French - but Google translate should be able to render assistance if needed. It contains information about Maison de l'orientation and, under "s'intégrer", CASNA specifically. Do note that they are open by appointment only. They are your go-to place for information and help on the secondary system.

The ministry of education also has a brief bit of information available on their website, which is worth checking out.

Lifelong Learning also offer a concise explanation of the school system, and a slightly more visually appealing but less detail graphic to go with it.

That's it for this installment of Luxembourg Insider, but I'm not quite done with schools yet. In a future installment I will provide a slightly more detailed introduction to the various schools available - including private ones - as well as instances to contact should a problem arise. There will also be an installment on adult education. In the meanwhile, do let me know if you have any questions or further information you would like to see included. You can reach me through audience@rtltoday.lu.