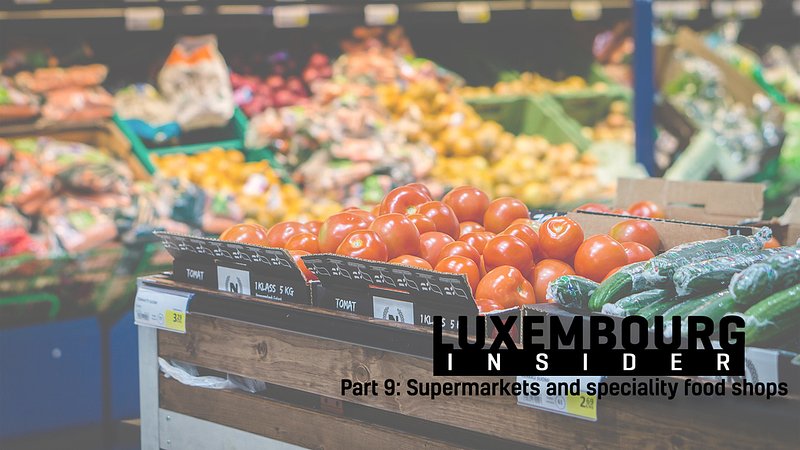 *Do note that 'cheap' in this context is highly relative, and with the exception of Germany neither of these countries can be accused of selling booze on the cheap. They're very much "BYOB" holiday destinations.

Luxembourg is in the enviable position of having three neighbouring countries a stone's throw away, which makes it rather easier to shop around not only for booze, but also food (and pretty much anything else).

With that in mind, this part of the guide will cover:

1) Is it worthwhile going across the border for your food shopping needs?
2) If you decide to do your shopping in Luxembourg, what options are available?
3) Going beyond the chains—speciality shops with international products in Luxembourg.

Cross-border shopping: Is it worth it?

Given the proximity of Germany, France and Belgium, and Luxembourg's reputation for being rather expensive for essentially anything but fuel, booze and tobacco, the temptation to head across the border for your shopping is certainly there. But is Luxembourg actually more expensive, and if so by how much?

A pretty good way to find out is to look at data from Eurostat, the EU's statistics agency—so that's exactly what I did. The chart below provides a comparison between the four countries for several categories—food, specific food categories, non- and alcoholic beverages, alcohol, and the overall combined household expenditure for these categories. 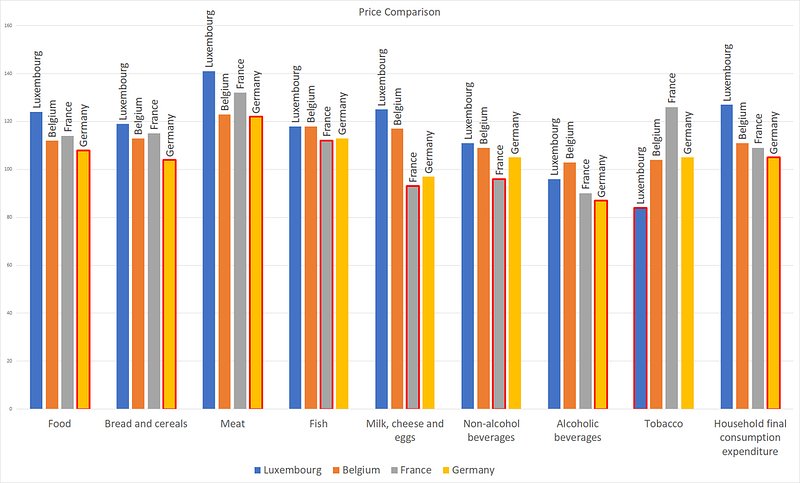 The bar of the cheapest country for each category is outlined in red, so the extremes break down as follows:

So, if you live off tobacco and alcohol there would be little point in going across either of the borders for your shopping. You should probably consider a lifestyle change, though. Not judging, just looking out for your health.

An easier way to get an overview is to look at the final category in the chart, which shows total household expenditure for all categories. This shows that Germany is cheapest (though there isn't that much of a difference between the three non-Luxembourg states), and Luxembourg the most expensive. In fact, Luxembourg is the 2nd most expensive EU-state after Denmark.

Yes, you can make savings by going across the border(s) for your shopping—and Germany is probably your best bet. However, it likely will not be particularly worthwhile unless you do large and relatively infrequent shops given that you have to take into account the cost of driving (petrol, vehicle depreciation) and your time.

As a personal side note, my partner and I very rarely go across the border for our shopping. For us it comes down to a balance of time and money spent, and the financial savings don't justify making a longer trip on a regular basis - even if it's not actually that far.

Luxembourg has quite a good range of supermarkets to choose from, though for price-conscious shoppers it's worth noting that prices can vary quite widely between chains. Unfortunately, we don't have any real data to show where each supermarket would land on a price scale, but it's a safe assumption that supermarkets lower down on the below list are likely, on average, to be a bit cheaper.

Do note that the list is not exhaustive, nor strictly arranged by price point. It does however include the main operators.

Cactus is a Luxembourgish chain of supermarkets, with outlets of varying sizes across the country. Some larger branches also offer garden and home goods through their 'Hobbi'-brand hardware stores. At the time of writing they have 15 supermarkets and 8 convenience stores and operate a range of smaller 'Shoppi' stores at petrol stations.

Cactus carries a wide range of products in all categories, including international brands and products aimed more specifically at international customers.

Naturata is a cooperative supermarket chain with 11 shops in Luxembourg. They specialise in organic and free range produce and carry a good range of specialist foods.

Match is a Belgian chain of supermarkets, with 13 full stores and a host of smaller outlets across Luxembourg. As with the above two, they carry a wide range of brands and fresh produce.

Delhaize is a Dutch/Belgian (it was Belgian but has merged with Ahold and the new company is based in the Netherlands) supermarket chain. They have 8 full supermarkets in Luxembourg, as well as several smaller shops.

A huge French chain, there are currently two Auchan shops in Luxembourg - one 'hyperstore' (in Kirchberg) and one smaller 'superstore' (in Differdange). As those familiar with the chain would expect, these shops carry a huge range of products and, like Cactus, this expands beyond food and drink to include home and other goods. Another Auchan hyperstore will be opening in the Ban de Gasperich development.

Another French chain of supermarkets, Cora has two shops in Luxembourg. They are both "hypermarkets", characterised by their large range of products.

This Belgian chain of supermarkets has four supermarkets in Luxembourg. Their mode of operation is slightly different to the shops above, and they tend to compete with hard discount retailers through their bulk sale approach.

I would be surprised if you weren't already familiar with this German chain, which focuses on keeping prices low by largely offering less-known brand alternatives and a smaller range of products. They operate nine shops in Luxembourg.

Much like Lidl, this is a German hard discount chain of supermarkets. They have a similar business model and operate 15 shops in Luxembourg.

Beyond the chains - specialist food shops

While most of the supermarkets carry a wide range of products to cater for all tastes and styles of cooking, the more adventurous cooks among you will likely find that they don't have everything you need. Nor will they necessarily have the best prices for 'international' food products. In short, it's not a bad thing to be familiar with smaller specialised food stores as well.

Luxembourg has quite a good range of specialist shops. This list again is not exhaustive.

*Both shops have listed the same address online and in business directories; they are, however, separate shops located next to each other.

That should pretty much cover it, but of course the list is not exhaustive. If I missed your favourite shop, feel free to let us know by leaving a comment or sending us a message on Facebook, and I'll see if we can't add it. Bon Appétit!