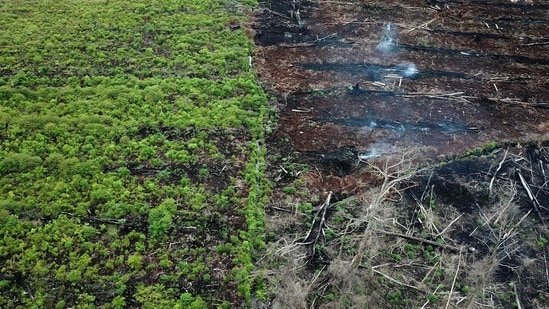 As I'm sitting in my Airbnb room in George Town, Malaysia, I look through the window, amazed by the vibrant landscape before me: A vibrant foreign city, a beautiful sea view, and all of that surrounded by a tropical forest. But I’ve quickly come to understand that things are not as rosy as they seem at first sight.

We decided with my boyfriend to go on a hiking holiday to Malaysia because both of us are huge nature and animal lovers, and since we were both interested in getting immersed into some Asian culture, the choice fell on Malaysia. Having done our research in advance about the country, we had somewhat of an idea about the deforestation and palm oil industry that were going on in the country, but there is a palpable difference between reading something and actually seeing it happen in front of your eyes.

After renting a car and driving through many parts of Malaysia, I was quickly confronted with the destructiveness of the palm oil industry: Tropical forests being bulldozed before our eyes and endless palm tree rows planted instead. I felt compelled to do some research on the subject, one that ended up being very shocking to me. So without further ado, let’s get to it, and maybe by the end of this article, some of you might reconsider certain lifestyle choices in the future! 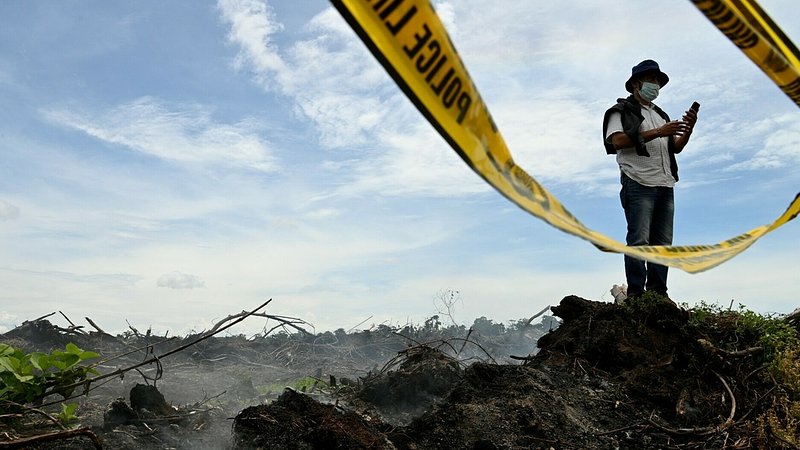 One of the major problems that the environment faces nowadays is deforestation. Deforestation occurs when forests are being logged, bulldozed or torched, without being replaced by new trees, which in turn poses a threat to the flora and fauna that reside within these forests. In Malaysia, large-scale logging is prevalent due to the huge amount of palm oil plantations that can be found here.

According to Global Forest Watch, Malaysia lost 2,7 million hectares of primary forest between 2002-2020, which accounts for 34% of trees. Although the government has made efforts in controlling activities, monitoring illegal logging, conducting environmental education, from what I’ve seen there’s still much to be done. From trash piling up in corners, to people burning off plastic and bulldozers ramming through ancient forests, it seems like there is a critical need for some environmental education and continuous action. 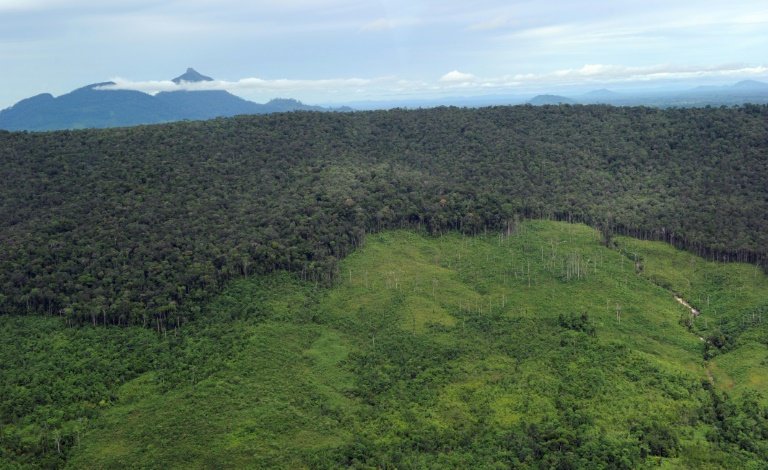 What is palm oil? Many might be surprised by the fact that palm oil is the most used edible oil in the world! This means that it’s not only used for cooking, but can also be found in detergents, cosmetics, even fuel...If you’d take your time to go through all the products you have in your house, I guarantee you’d be surprised by how many of them contain palm oil. According to WWF, palm oil can be found in almost 50% of the products that we can find in a supermarket!

Why is it used in almost everything? Plainly said, because you can produce a lot of it, at a cheap price, without using up too much space, as opposed to other vegetable oils. What’s more, it is an oil that is very versatile! Palm oil can be used to increase a product’s shelf-life, and doesn’t change a product’s smell or colour- hence why it is so popular and widely used everywhere, especially in Asia and Africa.

It can also be used to make textures spreadable...Here’s looking at you chocolate-spread fans! Yes, unfortunately some things don’t taste as good anymore once you know that endangered Orangutans lose their lives for our small gourmet pleasures, which brings me to my main point...

Some people forget or are oblivious to the fact that their everyday products come at a horrible price, which in this case, is the destruction of tropical forests and the loss of biodiversity and animal species. On a daily basis, that might not be something we’re confronted with or actually see, but I’ve seen with my own eyes the long stretched kilometers of palm oil plantations in Malaysia and it was a truly saddening sight.

You immediately notice the change of scenery: You’re driving your car through a dense forest, containing so many different trees and plants you don’t even know where to look at, to suddenly see it change into endless rows of palm trees, planted in a very unnatural symmetrical way, with nothing else surrounding it. There is only grass around it, it doesn’t seem like there is space for monkeys to jump from one tree to another or any other animal to take shelter in that habitat. 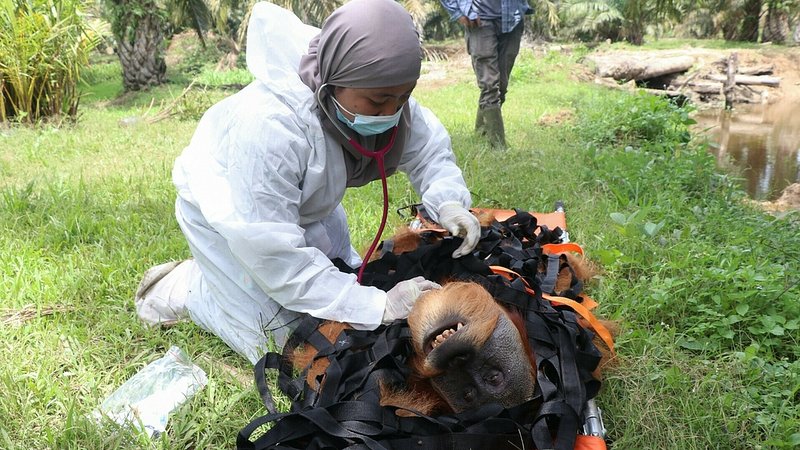 An official examines a sedated Sumatran orangutan, one of two to be relocated from an oil palm plantation in Sumber Bakti village in Nagan Raya on September 25, 2021, to the orangutan reintroduction centre in Jantho, Aceh Besar. / © AFP

The problem with palm oil plantations is that it has become a mono-culture that is responsible for the destruction of wildlife habitat and biodiversity. A plantation cannot really host many wildlife species, as opposed to wild forests that can host up to 200 species per hectare. Species like the Orangutan, pygmy elephant and Sumatran rhino that are already at the brink of extinction keep losing their habitats due to these deforestations. And it doesn’t end there!

Did you know that Indonesia, the world’s largest palm oil producer, shortly surpassed the United States in Greenhouse gas emissions in 2015? The carbon emissions that are released into the atmosphere by making space for plantations have disastrous impacts on climate. And that is because “palm oil based biofuels have three times the climate impact of traditional fossil fuels”. Cultivation methods such as burning forests release carbon dioxide and pollute the air, not to mention that some fires can be hard to put out. Some materials used on palm oil plantations result in water contamination and pollute the soil, affecting not only biodiversity but people as well.

Malaysia and Indonesia's tropical forest and indigenous people at risk

According to WWF, around 85% of the world’s palm oil is supplied by Malaysia and Indonesia, at the expense of some of the oldest tropical forests.

Borneo, the world’s third largest island, is home to one of the oldest rainforests in the world. Estimated to be around 130 million years old, it is It is divided among 3 countries: Kalimantan belonging to Indonesia, Sarawak and Sabah to Malaysia, and a smaller region belonging to the sultanate of Brunei. It is also sad to know that exactly that region, a home to so many species, is the world’s largest palm oil producing region. Half of the rainforests have been lost between 2005-2015 due to plantations.

In Indonesia, there have been a lot of human rights violations due to displacements of communities for the sake of palm oil plantations. Many indigenous people find themselves driven out of their lands because of large industries depriving them of their homes in order to build plantations.

It’s not about boycotting palm oil in general, since in essence there is nothing wrong with the product per se. Governments should ensure that forests are preserved or trees replanted, in order to save the remaining forested areas from disappearing. Palm oil should be produced in a more sustainable way, without endangering wildlife species or tropical forests. Also, many farmers depend on palm oil for their livelihood, which makes it even more difficult to find a simple compromise for all parties.

In 2004, the Roundtable on Sustainable Palm Oil has been created in order to tackle the troublesome impact of the palm oil industry on the environment. Consisting of palm oil producers, buyers and environmental groups, they try to set a standard for a sustainable palm oil industry, by being as transparent as possible when it comes to how and where palm oil is sourced, as well as setting strict policies to remove deforestation from the equation. Organisations such as the WWF, work together with governments that use or produce palm oil in order to make sure that there are “national laws” for a more controlled palm oil industry, “free of deforestation, conversion and exploitation”.

The EU and the US have been imposing regulations on palm oil, such as labelling requirements on the contents of vegetable oil products or even banning certain imports from producers, such as Sime Darby Plantations (that I've personally passed through In Malaysia, so I was very happy upon reading that).

What you can do

Palm oil is mostly used in processed food so why not be a bit less lazy and more creative by enjoying a home cooked meal? Avoid ready-made oven pizzas as they contain palm oil that stops the dough from sticking together, or instant noodles that contain palm oil as a preservation additive. You’d be surprised to know that some ice creams also contain palm oil to enhance the texture! Unfortunately, a lot of chocolates contain palm oil as it makes the texture very smooth...a heartbreaking fact for me personally.

Start reading labels. Or at least some of them? I know it’s time consuming but give it a try. I myself am guilty of not actually knowing what is in the products that I consume, but reading up on the palm oil industry alone gave me some food for thought to say the least...EU regulations require food products to clearly state if they contain palm oil, but sometimes non-food items (soaps, detergents...) might try to hide it. A small research on your phone can take away your doubts, and leave you with a better conscience!

Be informed. Speak out. Spread the word. I was guilty of not knowing enough on the subject! By spreading awareness, you can inform people on the subject! The power lies in the masses of the people, and so does change. It’s not necessarily about boycotting palm oil in itself, but about changing the destructive industry and making it sustainable.

You can also check this list to inform yourself on companies that use unsustainable palm oil.