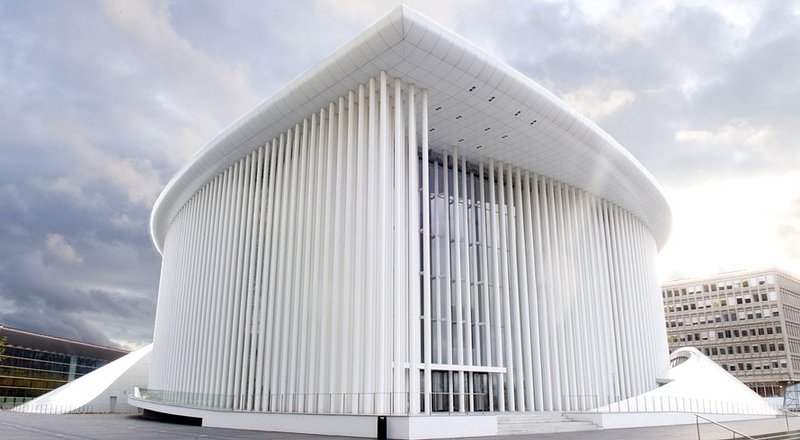 Among the office buildings of the European Union on the Place de l’Europe in Kirchberg sits an impressive crisp white building.

Inaugurated in 2005, the Salle de Concerts Grande-Duchesse Joséphine- Charlotte, more commonly known as Philharmonie Luxembourg, has not only established itself as one of Kirchberg’s landmarks but has also become a cherished place for cultural events.

The eminent architect Christian de Portzamparc designed the Philharmonie, which was commissioned by the Ministry of Public Works in 1997. Portzamparc, a recipient of the renowned Pritzker Prize, is known for his elegant designs and particular understanding of urban spaces. In the case of the Philharmonie, the architect initially wanted to give visitors the feeling of stepping into another world by planting trees around the building, that people would have had to cross in order to enter.

However, due to a lack of space, Portzamparc had to abandon this plan and came up with the peristyle (a porch of columns surrounding a building) that now characterises the building. The 827 columns surrounding the Philharmonie are designed to filter the light in a similar way to trees and thus encourage people to forget their hectic urban environment momentarily when they enter the world of music.

Seen from above, the concert hall looks like a leaf; in addition to the organic conotation this particular shape allows the audience to gather around the stage in the Grand Auditorium, ensuring a particularly pleasant auditory experience. The Philharmonie regularly offers guided tours where you can learn more about its architecture and general functioning. If you are unable to attend a tour, this video, created for the Philharmonie’s 15th anniversary in 2020, nicely captures its architectural beauty. 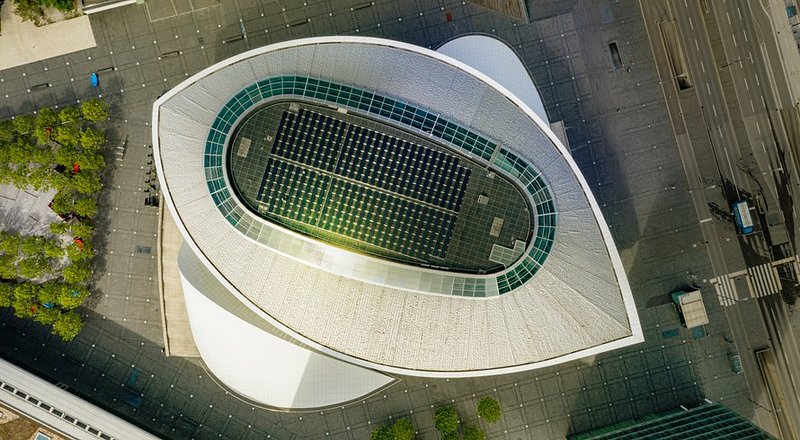 The Philharmonie has three auditoriums of different sizes. The largest, the Grand Auditorium, can welcome an audience of up to 1,500 people. To enhance the acoustics of the room, the hall combines a shoebox design with elements of a Shakespearean stage. While the shoebox is a typical design for concert halls, consisting of a simple rectangular room and several balconies, the Shakespearean stage originated in theatre. The latter designates a stage which is visible from every side, thus involving the audience and creating an almost immersive experience enhanced by the particular acoustics of the hall.

In contrast to the large Grand Auditorium, the Salle de Musique de Chambre (Chamber Music Hall) provides a more intimate setting for up to 300 listeners. In this room, curved walls reminiscent of a petal and a sound reflector above the stage maintain the sound quality. The smallest but, at the same time, most versatile hall is the Espace Découverte (Discovery Space). With a capacity of 120 people, the room is not only used to host musical events but also workshops. These three mainrooms, as well as additional foyers can be rented for private or corporate events.

The Philharmonie is the home of the Luxembourg Philharmonic Orchestra (OPL) and its conductor current Gustavo Gimeno. The orchestra, which was founded in 1933 as the in-house orchestra of RTL Radio, came under public administration in 1996 before finding its permanent home at the Philharmonie in 2005. Today, the orchestra unites musicians from over 20 different countries and has, so far, released 9 albums. Apart from its orchestra, the Philharmonie also has a resident organist, Maurice Clement.

The Philharmonie is dedicated to bringing music closer to children and adults alike and, therefore, regularly offers workshops in addition to the more traditional concerts. Depending on the event, these workshops are already suitable for toddlers and a great way to introduce children to (classical) music and instruments.

For adults, the Philharmonie offers lectures or short talks before concerts and longer ‘‘study days’’ that explore one theme over the span of an entire afternoon. With these initiatives, the Philharmonie counters the perhaps constrained and stuffy reputation of concert halls and creates a more accessible space for families to enjoy and learn more about music. To facilitate access to the concert hall for people from abroad, the Philharmonie operates a shuttle service from Trier for selected concerts.

If you wish to visit the Philharmonie, the current programme can be found here; tickets and subscriptions can be bought online, over the phone, or at the box office, and people under 27 receive a discount. In addition to in-person events, the Philharmonie also has a generous digital offer which ranges from interviews with musicians to digital concerts.