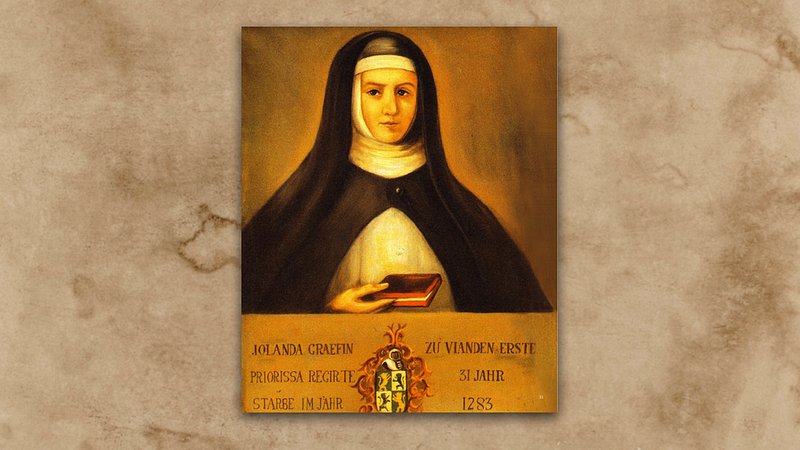 Portrait of Yolanda in the parsonage of Vianden. / © Public domain, via Wikimedia Commons

Yolanda of Vianden's life story caused quite the stir in medieval Luxembourg. In another unusual twist, it was recorded in the Codex Mariendalensis, a manuscript written not in Latin, but in Moselle Franconian, which resembles what we know today as Luxembourgish.

What must linguists Guy Berg and Yasmin Krull have thought when they (re)discovered the Codex Mariendalensis in November 1999?

There is no doubt that it was one of those "once-in-a-lifetime" discoveries, as the cultural and historic importance of the Codex cannot be overstated. And yet, neither the Codex, nor the story it tells are particularly well-known among residents of the Grand Duchy.

In this article, we will find out who Yolanda of Vianden was, what she did to become such a popular historical figure, why the Codex is so fascinating from a linguistic point of view, and how an anonymous English author decided to adapt the story for a happier ending…

I. Who was Yolanda of Vianden?

Yolanda (or Yolande, Iolanda) of Vianden was the youngest daughter of Count Henry I of Vianden and Margaret, Marchioness of Namur.

As Lord of the Castle and Count of Vianden, who was directly subordinate to the Holy Roman Emperor, Yolanda's father Henry I was one of the most powerful territorial lords in the area between the Meuse, Moselle, and Rhine rivers.

According to the poet of the Yolanda epic, Margaret's father was succeeded as Emperor of Constantinople by his son, her brother Balduin. In fact, the elder brother Robert first ascended the throne, which only passed to the younger brother Balduin after his death in 1228.

It was not until 1240 that this uncle of Yolanda was crowned in the Hagia Sophia, due to him being underage. He was to be the last in the line of Latin emperors of Eastern Rome.

Nevertheless, Yolanda certainly lived at a time when the Counts of Vianden were at the peak of their power, as they eventually became a vassal to the counts of Luxembourg in 1264.

These details are important to keep in mind, as they explain why Yolanda's life story was so extraordinary at the time.

II. The story of Yolanda, the pious rebel

From a very young age, Yolanda is convinced that Christ had "looked at her," i.e., chosen her, before she was even born. As a ten-year-old child, she already felt drawn to her "heavenly bridegroom," and during a visit to the Cistercian convent of Saisines (Namur), the daughter of the Count of Vianden expressed her desire to become a nun on the spot.

Her family dismissed her desires, especially since they already had other plans for Yolanda: She was to marry a fellow nobleman to secure the power and influence of the counts of Vianden, particularly against the neighbouring counts of Luxembourg.

But when the family council met to choose the husband of Yolanda's life, two travelling preacher monks stopped at Vianden Castle. Yolanda decided to confide in one of them, a young prior of the Trier Dominican convent called Walter von Meisemburg. "Brother Walter" promised, despite all foreseeable resistance, to help her enter a women's monastery, namely the nearest monastery of his order: Marienthal, in the neighbouring county of Luxembourg.

As a result, Yolanda rejected Count Walram of Montjoie, the prospective husband chosen by the family council. As expected, Yolanda's whole family, including her cousin who was the Archbishop of Cologne, tried to dissuade the noble girl from going through with her plans to become a nun. But the fiercest opponent of all was without a doubt Yolanda's own mother.

The latter, while on a visit to the Count of Luxembourg, made a detour to Marienthal, the place of her daughter's longing. Upon seeing the small, half-finished, and destitute monastery hidden behind deep woods, she was sure that she had found the right means to "cure" her daughter, convinced that Yolanda would "snap out of it" as soon as she saw the reality of life at the convent.

In her company, Yolanda was allowed to see Marienthal. But what the mother had expected did not happen. While she was engrossed in conversation with "Brother Walter", who happened to be present at Marienthal, the daughter fled unnoticed into the monastery kitchen.

There she harassed the nuns to shave her hair and put on her habit immediately. When the sisters, fearing the wrath of the temperamental Lady of Vianden, understandably hesitated, Yolanda cut off her hair with her own hands, put on the white habit and prostrated herself before the altar of the convent church.

When her mother eventually found her, she was beside herself with rage. She tore the nun's habit from her daughter's body and threatened the convent that she would order her knights and servants to destroy the monastery.

Yolanda initially refused to give in, but when her mother tries to light fire to the convent with a candle, she eventually agreed to return to Vianden with her.

However, from then on, the young count's daughter sees herself more than ever as a "God's bride" who will not let anyone or anything dissuade her from her heavenly bridegroom.

So strong is her conviction that her family eventually gives up the fight, even though they still try to convince her to at least join a "noble" convent. Even her mother would by this time have accepted a convent of the "grey" or "black" order (Cistercians or Benedictines). A mendicant convent like Marienthal, however, seemed unworthy of a count's daughter.

After many more disputes and fights, Yolanda was eventually granted her wish and the Count and Lady of Vianden allowed her to join the convent in Marienthal.

Yolanda was 17 years old when she became a nun and would end up serving God for 35 years in Marienthal, eventually being elected the monastery's prioress in 1258. During her tenure, the women's convent of Marienthal became widely famous.

Interestingly, what the author of the Yolanda epic did not mention is that Yolanda's own mother, who had resisted her daughter's desire to become a nun for so long, joined Marienthal herself after her husband's death on 20 August 1252, where she lived as a nun under her daughter's spiritual guidance until the end of her life in 1270.

So, how do we know about Yolanda's lifestory? Well, her rejection of a life in nobility to serve the Christian God was so impressive to her contemporaries that Brother Hermann von Veldenz decided to write it down as an epic poem in 1290, seven years after Yolanda's death. Brother Hermann is even said to have known Yolanda personally while she was still alive.

The epic poem consists of 5,963 lines of rhyming couplets. One of the most unusual aspects of the work – and what makes it so interesting to linguists – is that it was not written in Latin, which was standard practice for hagiographies at the time, but in Moselle Franconian, which bears close similarities to what we know today as Luxembourgish. The Codex Mariendalensis is thus considered by some to be the oldest "Luxembourgish" text.

After being kept at the Marienthal monastery for almost four centuries, the original was copied on paper by the Belgian Jesuit monk Alexander von Wiltheim in 1655.

The Codex was considered lost for a long time, and it was assumed that Nazi soldiers had taken the manuscript from the library of Ansembourg Castle to Germany during World War II.

However, as linguist Guy Berg discovered in 1999, the answer turned out to be much more mundane: The Codex Mariendalensis never left Ansembourg Castle, it had simply been misplaced. After learning about this monumental discovery, the Luxembourgish state purchased the family library of Count Gaston-Gaëtan de Marchant et d'Ansembourg, who still lives in the castle to this day, in 2008.

The Codex was classified as a national monument on 27 June 2008 and, alongside the other documents acquired from the Count of Ansembourg, it now forms part of the collections of the Luxembourg National Archives and the National Library of Luxembourg.

Interestingly, the Codex Mariendalensis is not the only written account of Yolanda's life.

In 1832, an anonymous English author published a collection entitled "Iölande, A Tale of the Duchy of Luxembourg; and Other Poems".

In the introduction, the author explains that during a visit to the castle in Vianden, he read about the story of Yolanda.

However, it appears that the role of the text as a hagiography and a celebration of Christian piety was either not clearly communicated to the anonymous author or simply lost on them. In the introduction, they speculate about a "secret lover who returned her [Yolanda's] affections with equal warmth". In their version of the story, Yolanda refuses to marry the nobleman chosen by her mother not because of a deep spiritual bond with God, but because she is in love with another man.

The English author also chose to "diverge from the course of history" by having the story end not with Yolanda becoming a nun, but with her marrying her "secret lover" – an ending which the anonymous writer deemed happier than the original.