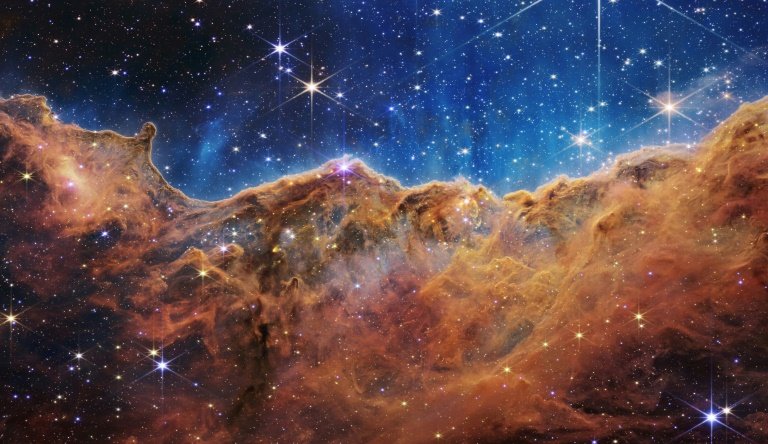 Earlier this week, the first James Webb Space Telescope images mesmerised the world. But do you know how telescopes actually work?

We often associate telescopes with astronomy, but it actually designates an instrument that makes distant objects appear closer, whether on land, sea, or in space. Hans Lippershey, a spectacle maker, patented the first telescope, consisting of a convex objective lens and a concave eyepiece, in the Netherlands in 1608.

When Galileo Galilei heard about the invention, he proceeded to build his own telescope in 1609 without ever having seen Lippershey’s version. Galileo gradually improved the design, increasing the magnifying power from only three to thirty. Galileo was the first person to use a telescope for astronomical observations, leading him to discover, among other things, four of Jupiter’s moons (we now know of 79) and that the Moon’s surface was uneven.

Galileo’s observations confirmed the heliocentric model of the universe, acknowledging that the sun and not the Earth is at the centre of the universe, which led to his prosecution by the church.

These early telescopes were what we now call refracting telescopes or simply refractors. In its simplest form, this telescope consists of two lenses, one objective and one eyepiece. The objective produces the image through a process of refraction, that is, the redirection of a wave (of light) as it passes through the lens, and the eyepiece then magnifies it. Other instruments that use lenses, such as binoculars or cameras, operate in the same manner.

In astronomy, refractors are primarily used to observe objects in the solar system, such as the Moon or Mars. However, refractors have certain issues that make them difficult to maintain and handle. Not only must the lens be flawless if you want to get a clear image, but it also needs to be fairly large and thick, which makes it heavy and impractical to use. Another problem arising from the lenses is chromatic aberration, which occurs because waves of varying lengths refract differently and cannot be focused in one place, causing the image to appear blurry and have rainbow-coloured edges.

In 1668, Isaac Newton solved these problems by inventing the first reflecting telescope or reflector, which uses mirrors instead of lenses. Using mirrors has several advantages; they are easier to build and maintain, can be much thinner than lenses and are therefore lighter.

Rather than refracting the light, the Newtonian telescope produces an image by gathering and reflecting the light in a large, curved mirror before focussing it onto a smaller mirror in which flips the image and directs it to the eyepiece, which magnifies it. Because the mirror can be much larger than a lens, these telescopes are more powerful and can capture waves outside the visible light spectrum, such as infrared or ultraviolet.

At the end of the eighteenth century, telescopes gradually became much larger. In 1789, William Herschel built the largest telescope of his day, a reflector that was twelve meters long. However, due to several issues, Herschel ultimately preferred to use a smaller version that was only 6 meters long.

With this smaller telescope, Herschel discovered Uranus and two of its moons. The largest telescope on Earth is currently the Gran Telescopio Canarias or Gran TeCan. Located in the Canary Islands, this telescope uses a mirror with a diameter of 10.4 meters, allowing it to capture images 500 million light-years away from Earth.

Launching telescopes into space massively increased the range and number of objects astronomers could observe and study. In 1990, NASA, in collaboration with the ESA launched the Hubble Space Telescope into space. At the time, it was the largest space telescope, providing us with unprecedented images of space.

On Christmas Day 2021, the James Webb Space Telescope became the currently largest telescope in space. Orbiting one million miles away from Earth, it uses a mirror with a diameter of 6.5 meters (Hubble’s is only 2.4m) to provide us with much more detailed and far-reaching pictures than Hubble. You can find more information about the James Webb telescope and revisit its first images on NASA’s dedicated website.

If you are interested in astronomy and are maybe even considering getting your own telescope, the Astronomes Amateurs du Luxembourg (AAL) might be the right place to find like-minded people and get started. The association hosts regular events and has a helpful FAQ section on their website.