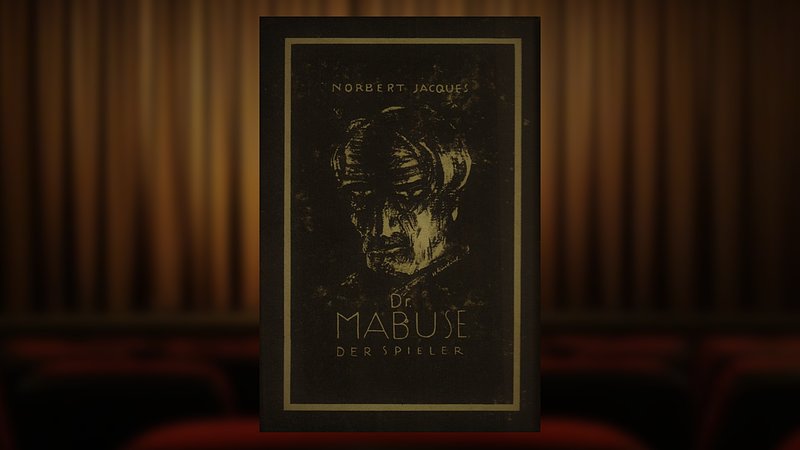 The character of Dr Mabuse, a master of disguise and manipulation, is a staple of the silent film era. The iconic figure was created by Luxembourgish author Norbert Jacques, a man who disgraced himself during his life and was even expelled from the Grand Duchy in 1946.

The case of Norbert Jacques is an interesting one from an outside perspective: Here is an author from an arguably tiny country that not only managed to reach an unprecedented level of literary success for a Luxembourgish author, but also lived an incredibly eventful life of travels and adventures. And yet, despite all of this, Norbert Jacques will probably never be remembered as one of the country's great authors.

To understand how the creator of one of silent cinema's most iconic characters became a hated outcast in his own country, we will first take a look at the first half of his life and, of course, Dr Mabuse himself, before discovering the true extent of Jacques' disgrace.

Norbert Jacques: The author who travelled the world

Norbert Jacques was born on 6 June 1880 in Eich. After graduating from secondary school in Diekirch, Jacques began studying law in the German city of Bonn. However, he ended his studies prematurely to work as a journalist in Beuthen, Berlin, and Hamburg.

Early on, Jacques started travelling across Europe. He visited Brazil in 1907, which is said to have been a highly important event in his life.

Between 1912 and 1914, Jacques participated in an expedition around the globe, which brought him through Ceylon, Macao, and Sumatra to Oceania and China. There he travelled on the Yangtze River all the way to China's border with Tibet. He then sailed on a cargo ship to Australia and Peru. Chile, the Argentinian Pampas, and Rio de Janeiro were also among the stops of this expedition.

Travelling was to remain a passion throughout his life. In 1928, he crossed the Andes from Ecuador into Colombia, while also visiting Panama, Venezuela, the Antilles, and Curaçao. In 1929, he travelled across the African continent by boat, train, and jeep, a journey which brought him from Egypt all the way to what is nowadays known as Namibia. In 1931, Jacques travelled to Turkey alongside German film director Fritz Lang.

Throughout his life, Jacques worked as a self-employed novelist, travel author, journalist, essayist, screenwriter, and critic.

He spent his final years commuting between Hamburg and Lake Constance, where he had acquired a farm in the early 1920s.

But by far his best-known creation is the character of Dr Mabuse.

Dr Mabuse: The criminal mastermind who may be a ghost

It is said that Jacques got the idea for Dr Mabuse while crossing Lake Constance on a ferry in the aftermath of World War I. At that time, the area around Lake Constance was a thriving hub for the black market.

Jacques allegedly saw a passenger on the ferry who was selling stolen goods and based Dr Mabuse's built and face on him. Eventually, the author transformed the petty criminal into a cunning super villain. It is said that once Jacques returned from Constance, he wrote the first Mabuse novel within 20 days.

This first novel, Dr Mabuse, der Spieler, was published in 1921 and benefitted from unprecedented publicity, quickly becoming a best-seller.

Fritz Lang, an acclaimed German film director, collaborated with his wife Thea von Harbou on a movie adaptation of the novel, which was likewise a huge hit. 'Dr Mabuse the Gambler' (1922) was released in two parts, each lasting more than four hours: 'The Great Gambler: An Image of the Time' and 'Inferno: A Game for the People of Our Age'.

Dr Mabuse is a master of disguise and telepathic hypnosis who is infamous for using body transference to create a "society of crime," most often through demonic possession, but also through the employment of object technologies such as televisions and phonograph machines. Mabuse rarely executes his crimes in person, instead relying on a network of operatives to carry out his plans. Mabuse's operatives include career criminals who work for him, innocent people who are blackmailed or brainwashed into cooperating, and dupes who are manipulated so successfully that they are unaware that they are doing exactly what Mabuse intended.

As depicted in "The Testament of Dr Mabuse", Mabuse's identity frequently changes; one "Dr Mabuse" may be vanquished and committed to an asylum, jail, or the grave, only for a new "Dr Mabuse" to arrive later. The replacement always uses the same methods, possesses hypnosis powers, and is a criminal genius. In several instalments of the series, it's even suggested that the "real" Mabuse is some sort of spirit who possesses a series of hosts.

Norbert Jacques: Disgraced and banished from the country

After reading about Norbert Jacques’ life as a globetrotter and the enormous success of Dr Mabuse, it might come as a surprise to you that the name Norbert Jacques is very rarely, if ever, cited among Luxembourg's great authors. However, there is a very good reason for this.

During World War I, Jacques benefitted from being a Luxembourgish national and provided reports about the war in Belgium, the Netherlands, France, and England.

Already at that time, Norbert Jacques showed very clear sympathies for Germany, which Luxembourg's public did not take kindly to. Even after other Luxembourgish intellectuals tried to rehabilitate the author in the early 1920s, he remained a hated figure in the Grand Duchy.

Jacques published numerous works that focussed on Luxembourg, shifting between stressing his connection with his home country and ironically poking fun at what he saw as a country defined by provincialism, conservatism, and clericalism.

When the Nazis started gaining power in the early 1930s, Jacques initially responded by trying to reconnect with Luxembourg.

Through friends, he managed to get his daughters Luxembourgish passports and his Jewish wife, Grete Samuely, emigrated to the US through Luxembourg after their divorce.

But despite being imprisoned by the Gestapo for 14 days and a temporary writing ban, Jacques could not bring himself to go into exile.

In May 1940, he ultimately became a Nazi collaborator and offered his services to the German culture propaganda department in Luxembourg. From 1941, he regurgitated the Nazi’s talking points on the "Luxembourg Question" in German newspapers.

After the end of the war, Jacques was accused of collaboration, sympathising with the Nazi cause, denunciation, and high treason. He was held in custody for four months in a state prison and finally expelled from the country in July 1946, without ever officially facing trial.

Norbert Jacques died in the German town of Koblenz on 15 May 1954 but to this day, his name remains tarnished in Luxembourg.