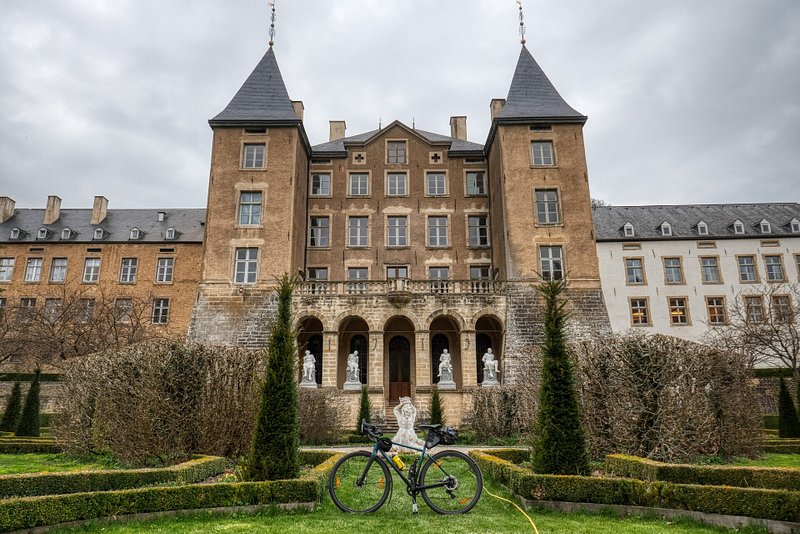 The formal gardens at Ansembourg Castle are well worth a day trip. /

Apart from numerous parks and forests, Luxembourg also has beautiful gardens you can visit. Unlike visiting a park, taking a walk in an an ornamental garden can feel more special and can be a nice weekend activity to take your mind off things, spend time outside, and admire the art of gardening.

A brief history of gardens

Cultivating enclosed spaces of land for agricultural or aesthetic purposes is a part of every culture, and gardens have existed for thousands of years. As the gardens’ purpose and design necessarily depend on the culture and climate they are in, a number of different types emerged throughout history. Records situate the first ornamental gardens, cultivated only for aesthetic pleasure, in Mesopotamia (c. 2700 BCE) and Assyria (C. 1100 BCE). While we cannot be sure what these gardens looked like, the records seem to emphasise trees rather than flowers.

Pleasure gardens were also popular in ancient Rome and included a larger variety of plants, including trees, shrubs, and various types of flowers. These gardens were often found in the courtyards of villas and included fountains, statues, and a space to eat, not unlike modern-day gardens. It is through the Roman Empire and the influence of Islam in Spain that gardens were introduced across Europe. During the Middle Ages, gardens were primarily found in monasteries and used to cultivate food, but castles could also have small recreational gardens.

Outside of Europe, gardens also developed in South America, the Middle East and China. In these warmer climates, water played a major role in the design and maintenance of the gardens. Chinese and Japanese gardens attempted to reproduce the natural shapes of rivers and mountains. As a result the gardens often look like miniature landscapes: they have stone and water elements and, Japanese gardens in particular, shape their plants like mountains.

During the Renaissance in Europe gardening increased in popularity and reflected formal ideas of classical beauty and order. Both the Italian Renaissance, and later the French Baroque garden sought to reproduce geometrical shapes linked to architecture in their gardens.

The result were large gardens, such as the Garden of Versailles, with fountains, and symmetrical planting patterns, cultivated to impress visitors. While these forms of gardening tried to impose order on the landscape, the English garden of the 18th century was supposed to be more natural.

However, it was highly influenced by landscape paintings and picturesque aesthetics, and still required very large spaces and often included a lake and artificial ruins. Many of these gardens are still maintained today by organisations like the National Trust and are popular tourist attractions.

The English garden influenced the creation of public parks during the 19th century. Although gardens had been around for centuries, ornamental gardens were only accessible for the upper classes and having a garden attached to one’s house only became commonplace in the 19th century, as did gardening as a past-time.

Gardens to visit in Luxembourg

In the north, next to the Prabbeli cultural centre, you can find the Wiltz Garden. The garden started as an art project in 1983 and now covers 2,5ha of land. The so-called ‘Garden of Art’ was meant to be an artistic intervention into public life and the various plants, paths, and sculptures form a living work of art. The garden is maintained by disabled, long-term unemployed people, workshop participants, and artists. It is free to visit all year round, and guided tours are also available.

Located in the Valley of the Seven Castles, Ansembourg Castle hosts a beautiful garden that is not to be missed. The castle is private property, but its garden is open to the public from 10 am to 6.30 pm unless the site is booked for events. The terraces of the ornamental garden have a baroque character and also include fountains, exotic plants, and an orchard. Unfortunately, dogs are not allowed in the garden.

The Rose Garden next to Munsbach Castle was established in 2017 by the Luxembourg Rose Friends. The garden was created to preserve and collect varieties of roses found in Luxembourg and now includes 600 different types of roses. The garden is open to the public, free of charge, and the Rose Friends regularly organise events, such as courses on how to care for roses, in the garden.

The Klouschtergaart, literally meaning monastery’s garden, is the Grund in the heart of Luxembourg city, near the Neumunster Abbey. The garden has not only an ornamental function but was created to re-introduce rare plants back into the Luxembourgish ecosystem and preserve local plants. Situated at the foot of the Bock rock, the garden benefits from a unique climate that encourages the plants’ growth. Visiting the garden is free, occasionally, guided tours are organised.

More information on gardens and parks in Luxembourg can be found here.