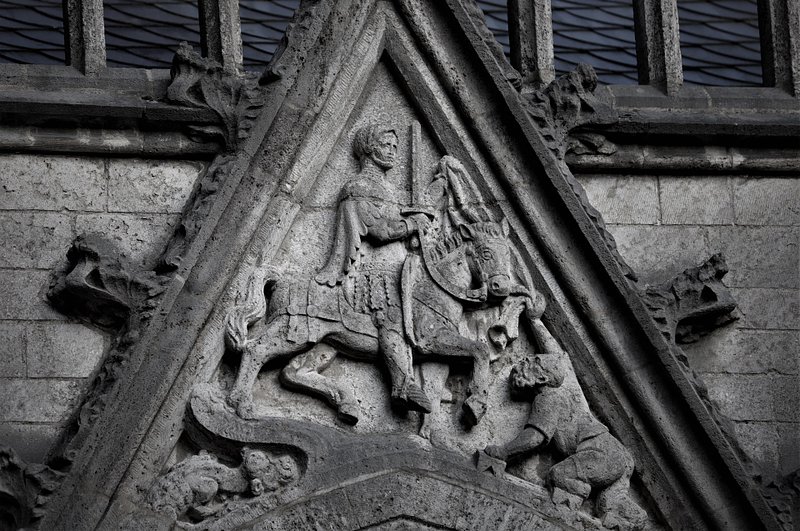 While most of the major feasts of the Catholic church are still widely celebrated in Luxembourg, some have lost their former significance.

One such holiday is St Martin's Day, which, for numerous reasons, used to be a busy time of year for Luxembourg's population.

St Martin's Day is traditionally celebrated on 11 November. In Germany, where the feast is known as Martinstag, it largely remains a popular holiday.

In some regions, children tingle from door to door carrying lanterns and asking for sweets, similar to the Luxembourgish tradition of Liichtmëssdag.

Many families still serve a traditional goose dinner, known as the Martinsgans, and bakeries sell traditional pastries associated with the holiday. Quite notably, 11 November also marks the beginning of the carnival season.

In Luxembourg, the feast is known as Mäertesdag. Contrary to Germany, Mäertesdag has lost most of its former popularity in the Grand Duchy. However, it used to be quite a significant day on the old Luxembourgish calendar.

But who was St Martin anyway, and how exactly was Mäertesdag celebrated in Luxembourg?

Life and legend of St Martin

From the age of 10, he attended Christian church against the wishes of his parents. Christianity was still not completely accepted among the elites of the Roman society, having only become a legal religion in the Empire in AD 313.

Martin joined the Roman army at the age of 15 and was stationed at what is nowadays the city of Amiens in France.

Legend has it that it was during this time that Martin once met a scantily clad beggar outside of the city of Amiens. He decided to cut his military cloak in half to share it with the man. That same night, Martin had a dream of Jesus wearing the garment he had given away. In some versions of the legend, Martin finds his cloak fully restored after waking up from this dream. The vision strengthens his faith and eventually leads to Martin's baptism at the age of 18.

Following his discharge from the army, Martin became a disciple of Hilary of Poitiers in modern-day Tours. After a return to Italy, during which he, among other things, converted various people to Christianity and lived as a hermit on Isola d'Albenga, he eventually travelled back to Tours and established a hermitage. The site would go on to become the Benedictine Ligugé Abbey, the oldest known monastery in Europe.

Martin preached throughout western Gaul and was ultimately acclaimed Bishop of Tours in AD 371.

He died in Candes-Saint-Martin in AD 397, and after some quarrelling over where he was to be buried, his remains were laid to rest in a small grove outside of Tours.

Saint Martin is not only one of the most popular saints, but he is also linked to a couple of interesting linguistic developments.

The priest who cared for Martin's part of the cloak, which he kept and became a religious relic after his death, was called a 'capellanu' (from the Latin word for cloak, "cappa"). From this term evolved the French word 'chapelain', from which in turn the English word chaplain is derived.

There are numerous legends stating that St Martin's travels also took him to nearby Trier a few times, explaining the widespread veneration of the saint in this particular region.

Besides the popularity of the Saint himself, Mäertesdag used to be an important date on the Luxembourgish calendar as the feast coincided with numerous other events.

For winemakers across the Moselle, and in the olden days also in northern Luxembourg, it was the time when the very first young wines were served. Around the same time of year, farmers paid the annual lease for their land. Sometimes, farmers were hesitant to pay this lease, in particular when they had a bad harvest, which is why people used to say De Mäerten deet d'Bauere fäerten ("Martin scares the farmers").

Bills were also due for other professions. According to Luxembourgish linguist and folklore expert Alain Atten, shipbuilders in Echternach had their own traditional St Martin's Day song, in which they lamented not having paid their dues yet.

Mäertesdag used to be a day of celebration too, however. While people in the country's winegrowing regions indulged in a night of boozy enjoyment, other areas in Luxembourg held communal dinners, known as Mäertesgemeng.

The municipality of Vianden holds a variation of the Luxembourgish Buergbrennen tradition around Mäertesdag: An event known as Miertchen, usually involving two bonfires and a torchlight procession.

While this is one of the few Mäertesdag traditions that persists to this day, the Miertchen found itself at the centre of a national controversy back in 2013.

During the traditional torchlight procession, participants chant various traditional nursery and joke rhymes. One of these rhymes that appears to celebrate the attempted burning of a Jewish person sparked outrage in 2013, raising the question why the rhyme was still being chanted during the procession.

In fact, as early as November 1948, Tageblatt journalist Joseph Hanck had traced the origins of the rhyme back to a local story. According to Hanck, the story goes that a Jewish merchant tricked the residents of Vianden, who ended up chasing him through town. The man hid in a barn, leading the mob of angry customers to set the straw ablaze and forcing him to escape.

Marc Schaefer, the then-mayor of Vianden, reacted to the controversy by stating that neither he, nor the "hundreds of people in the streets" had questioned the rhyme up until that point. However, Schaefer promised that the municipality would do everything it could to ban the chanting of the rhyme.

The controversy was even a topic in the Chamber of Deputies, when then-MP Corinne Cahen submitted a parliamentary question on the topic to the Prime Minister.