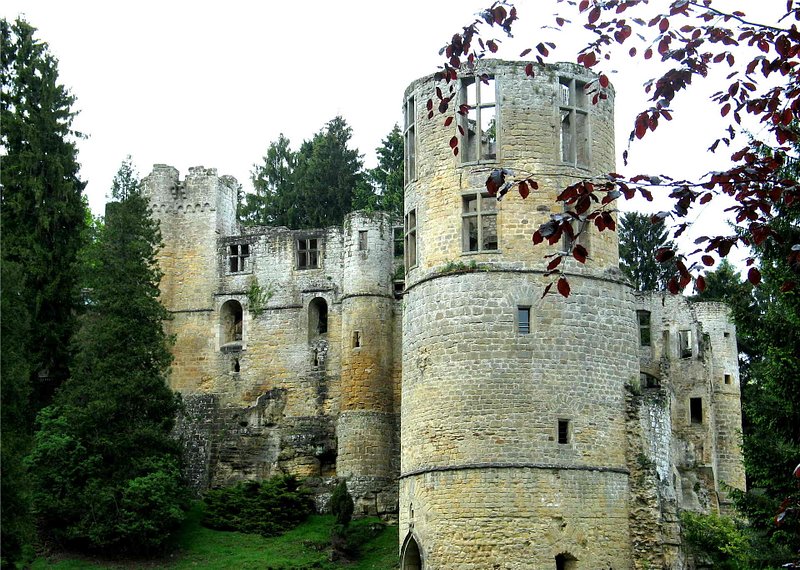 If you are interested in medieval and renaissance history, Beaufort is the perfect spot to soak up some knowledge of the distant past. Here you can visit not one but two castles in one day: medieval ruins and an adjacent renaissance building.

The construction of the medieval castle started as early as the 11th century, and it was built in four phases, beginning in 1050 and ending in 1650.

Walter from Wiltz, the first lord of Beaufort, started the construction. What started out as a small square-shaped fortress on top of a rock was gradually enlarged to become an impressive building.

Through marriage, the castle came into the possession of the House of Orley in 1348. The family continued the expansion, and the castle grew to overlook the valley.

Almost a century later, in 1477, the castle changed proprietors again and was now owned by Johann Bayer von Boppard. In 1539 another new owner added a Renaissance wing on top of the medieval construction.

The castle’s history of changing ownership was still not finished with this. After tumultuous events, including wars and personal feuds, Jean Baron de Beck, the governor of Luxembourg, finally bought the castle in 1639.

Jean Baron de Beck was an illustrious military man and initiated the construction of the Renaissance castle just behind the medieval ruins.

Contrary to its medieval predecessor, this building was completed within a mere ten years, in 1649. The Renaissance castle actually served as primary or secondary residence to its owners, and although the state owned it since 1981 it was never opened to the public.

This situation changed when Anne Marie Linckels-Volmer, the last chatelaine of the castle, passed away in 2012 and her former home was opened to visitors.

The construction is in splendid condition and has virtually been left untouched since its construction, surviving several wars unharmed.

To preserve the spirit of the place, the site’s interior and surrounding gardens, as well as the stables and distillery, have not been changed since the castle was last inhabited. When people visit the castle now, they take a step back in time and get a true insight into what life in the castle was like.

Although the Renaissance castle has been well preserved, unfortunately, the same cannot be said of the medieval castle.

The latter started to be heavily neglected in the second half of the 18th century. It was then uninhabited and merely served as quarry for the inhabitants of the surrounding villages.

The construction suffered considerably from this neglect and was damaged significantly over those years.

Fortunately, Edmond Linckels acquired the castle in the 20th century and started to rebuild the previously abandoned ruins.

After his improvements, he opened the ruins to the public in 1932. Partly because of Linckels’ efforts, the castle was classified as a national monument in 1988 and now also belongs to the state.

Both constructions remain open to visitors, and visiting them allows you to discover how the architecture changed and developed over the centuries.

You can explore the medieval ruins on your own or as part of a guided tour, whereas the Renaissance castle is only accessible on guided tours.

A particular highlight of the tour is a tasting of the castle’s own liquor at the end. Tours last approximately an hour and are offered in Luxembourgish, French, German, English and Dutch, making them accessible for a wide range of visitors.

The site is open Thursday to Sunday from 11 AM to 4 PM, all the way from April to November. However, guided tours can be booked all year round upon request.

Free on-site parking is available, although the castles are also well-connected to public transport if you wish to arrive by bus. Entry costs €5 for adults and €4 for children and students, while the price for groups is €85.

More information on guided tours and how to book can be found here or here.

Unfortunately, the medieval ruins were damaged during the floods in July and remain closed for the time being for safety reasons.