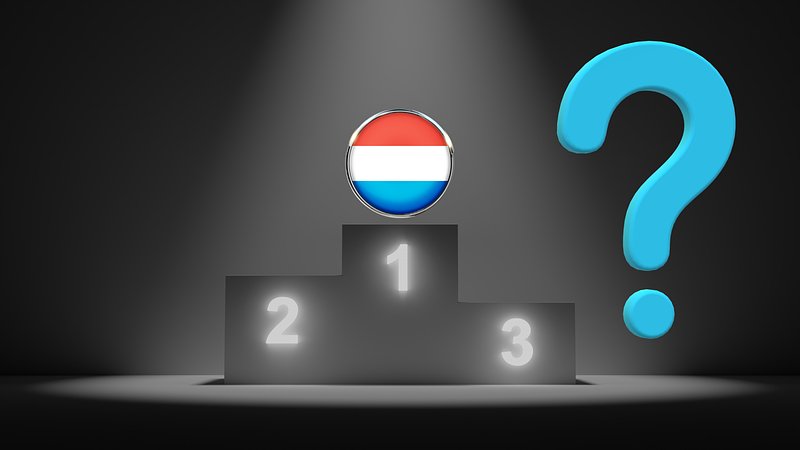 The Grand Duchy routinely comes out near the top of world rankings for happiness, economic competitiveness, quality of life, reputation and more. But what’s driving the high ratings -- and is Luxembourg really as successful as the results suggest?

The WER, the HPI, the IMD WCY, the WEF GSMI… I could go on. There’s a wealth of world rankings out there – most with consonant-mangling acronyms to boot - and our readers often flock to the latest report showing either just how expensive Luxembourg is (less than it was, apparently), or how infuriatingly happy it is (more than it was, apparently).

The rankings tap into our fascination with comparing ourselves against others, and seem to provide some objective measure of just how Luxembourg is doing. Yet as Isabella Eastwood has written for this very site, the reports can seem terribly arbitrary and are probably best taken with a substantial grain of salt.

As an exercise in intellectual curiosity, however, this article throws away the grain of salt and delves deep into the rankings. How does Luxembourg stack up and why do we keep getting such punchy results? And what do all those ugly acronyms actually stand for?

Let’s kick off with happiness. The UN-sponsored World Happiness Report (WER) 2021 ranks Luxembourg as the planet’s eighth happiest country. Stacking up in Luxembourg’s favour is a strong economy, as measured by Gross Domestic Product (GDP), high levels of social support and of personal freedom.

Pretty great, right? Except an alternative measure, the Happy Planet Index (HPI) 2019, puts Luxembourg second-last in the world. The reason being that the Index weights criteria differently, and includes a measure of a country’s ecological footprint, or how much demand it’s putting on the planet. Thus, while the Grand Duchy is right up there on life expectancy and quality of life, it’s ecological footprint per person is double that of the US, with the highest car ownership rate and highest energy consumption per capita in Europe.

So we’re pretty happy but burning lots of fossil fuels to guarantee our wellbeing. Just how bad is the damage?

Well, carbon emissions are a big part of the ecological footprint. On 2017 figures, Luxembourg emitted 15.63 tonnes of CO2 per year, per person. On this measure, that’s just behind the US (16.16 tonnes), and 13th in the world – according to figures from Our World in Data.

That sounds pretty terrible. But on another ranking, the Climate Change Performance Index 2021, Luxembourg is the 21st best in the world at efforts to combat climate change. It’s making progress on cutting emissions and switching to renewables, and has decent climate policies in place.

That’s important as, while Luxembourg is far from bearing the main brunt of changes in the climate, it still secures a middle-ranking of 74 in the Global Climate Risk Index 2021 (PDF), which is a measure of how exposed countries are to the impacts of extreme weather, like this year’s flooding.

We’re number one! The World Bank’s 2020 figures suggest Luxembourg has the highest GDP per capita in the world, on a Purchasing Power Parity (PPP) basis. PPP is essentially a measure that standardises prices across countries, providing a fairer means of comparison.

The Grand Duchy is also doing pretty well in helping people to access that wealth. The World Economic Forum Global Social Mobility Index (WEF GSMI) puts Luxembourg 10th in the world, suggesting it is relatively easier to achieve a higher quality of life than that into which you were born. 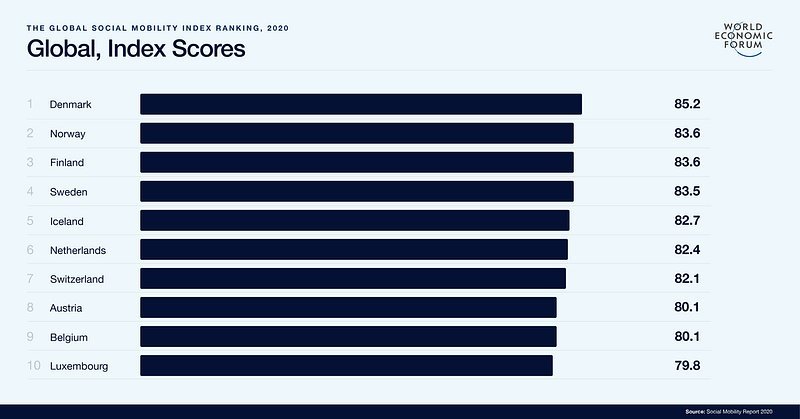 This is achieved partly down to political choices on things like taxes, health, education, and so on, but also depends on the strength of the economy.

The IMD World Competitiveness Yearbook (WCY) 2021, is one measure of Luxembourg’s economic strength, placing Luxembourg 12th, thanks to its world-class finance centre, strong integration in international trade, and solid public finances, amongst other measures.

Luxembourg also benefits from a strong reputation, with the FutureBrand Country Index 2020 (PDF) ranking Luxembourg 19th in the world, although that is down nine from the previous year.

There’s also some good news in the Global Innovation Index 2020, with Luxembourg ranking 18th overall (PDF). However, the Grand Duchy is outpaced by some of its European neighbours, with France (12th) and Germany (9th) ranking higher. Overall, Luxembourg could be doing more to invest in human capital and research.

It’s all well and good being number one, I hear you say, but can anyone actually afford to live here?

Comparison site Numbeo says Luxembourg is the eighth most expensive country in the world to live in.

Global rankings often focus on cities. Mercer’s Cost of Living City Ranking 2021 places Luxembourg City as the 83rd most expensive city in the world, down 20 from the year before. The fall seems to have little to do with developments in Luxembourg, however, and is more a reflection of economic crises pushing up costs elsewhere in the world.

And while the Grand Duchy is undoubtedly dear, a 2018 study from UBS put Luxembourg City at third in the world in terms of earnings, and fifth for purchasing power, suggesting many people could afford its sky-high costs (especially housing).

Luxembourg’s security and prosperity is thanks in part to a stable political system. The Economist Democracy Index 2020 describes Luxembourg as a full democracy, ranking it 13th in the world. It loses points slightly for lower political participation compared to the top-ranking countries.

Another way of looking at Luxembourg’s political system is through the Freedom House ranking, which is a measure of people’s access to political rights and civil liberties. Their 2021 ranking puts Luxembourg joint fourth, alongside Australia, Ireland and Denmark, noting that political rights and civil liberties are generally respected. The Grand Duchy lost a point for transparency, however, and concern was also raised about the onerous language requirements for public sector workers. 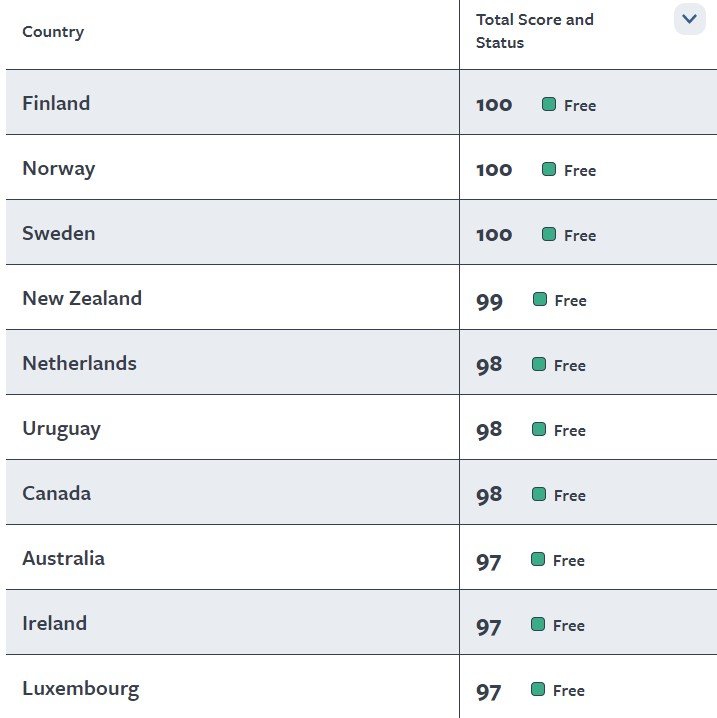 Luxembourg is also low on corruption. The Corruption Perceptions Index 2020 ranks Luxembourg 9th least corrupt in the world, noting that western Europe as a whole is the world’s least corrupt region.

So far, so good. Pretty solid scores across the board, notwithstanding an unhealthy appetite for fossil fuels and the risk of flooding and extreme weather. There’s just two more areas to look at: health and education.

Luxembourg has weathered the pandemic second best in the world, according to data compiled by the German magazine Der Spiegel. The magazine’s Stringency Index compared a number of factors, including health and the economy, progress on vaccinations, and the number of restrictions on personal freedom. Der Spiegel corona rankings

Yet looked at by narrower measures, such as excess mortality, defined as deaths from all causes compared to previous years, the Grand Duchy has fared worse than many European countries. Plotted against its neighbours, in the chart below, only Belgium does worse.

This is despite the fact that Luxembourg does quite well on health rankings. The Euro Health Consumer Index 2018 (PDF) places the country seventh among European nations, ahead of France and Germany. It scores particularly well for waiting times for treatment, as well as clinical outcomes.

Moreover, it achieves this while spending a smaller amount relative to GDP compared to other European countries. Eurostat figures from 2018 show that Luxembourg spent 5.29% of GDP on healthcare, against an EU average of 9.87% and well below Germany and France (11.47% and 11.26% respectively).

Last but not least, education. The OECD’s PISA rankings (that stands for Organisation for Economic Co-operation and Development Programme for International Student Assessment, since you asked) place Luxembourg 34th (out of 79) for maths, 35th (out of 79) for science, and 38th (out of 78) for reading. Not great, exactly.

Luxembourg is taking steps to address the low scores, suggesting that the Grand Duchy's results are peculiar to its multi-lingual situation. To achieve better results in future, authorities are looking into the possibility of changing the language for each test depending on the pupil's aptitude, which could help.

It’s better news for higher education, however, with the University of Luxembourg ranked the 20th top ‘young university’ in the world in the Times Higher Education (THE) Young University Rankings. In the THE overall rankings, the institution comes in the 251 to 300 bracket globally – with a significant improvement noted in its score for research.

What have we learnt?

Yet no country is without its challenges. Its excess mortality during the pandemic highlights the difficulty the Grand Duchy has had in containing the virus, while its education statistics leave something to be desired. Its per-capita carbon emissions also remain staggeringly high.

It’s worth remembering that these rankings are all, to some extent, arbitrary. As the happiness results highlight most starkly, what you choose to measure makes a big difference to the results. Luxembourg’s either one of the world’s happiest nations, or one of the least -- take your pick.

One final index attempts to measure all the different metrics which determine what a country contributes to the world beyond its borders. The latest Good Country Index puts the Grand Duchy 11th in the world, with an outsized contribution to global culture, prosperity and equality, and health and wellbeing.

So while Luxembourg isn’t perfect, perhaps we can all agree that it is at least, pretty good?