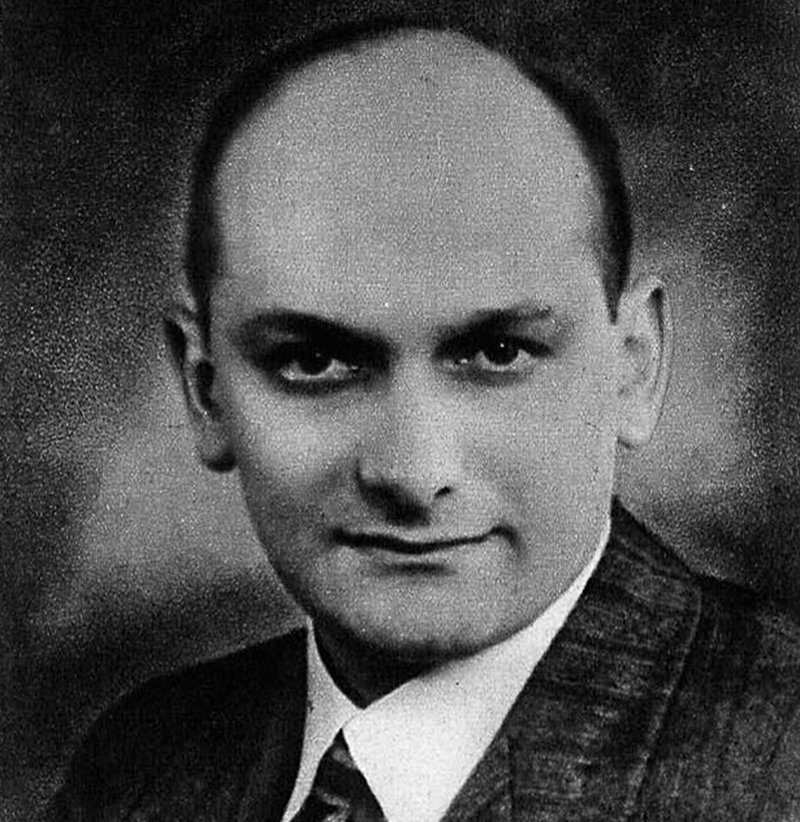 The Victor Bodson Bridge in Hesperange is not only a useful way of speeding across the Alzette valley below. It also commemorates one of Luxembourg’s wartime heroes, who during the Holocaust risked his life to save dozens of Jews.

At the time of the German invasion of Luxembourg in May 1940, there were around 3,900 Jews living in the Grand Duchy. A year later, when Jewish emigration was banned, a majority of the country’s Jewish community had fled overseas.

Those left behind faced an uncertain fate. Many of those who were too old or weak to work were sent to a so-called “Jewish retirement home” in the former convent of Cinqfontaines, where they experienced overcrowding and a scarcity of food and medicine.

Others, including many who were originally transported to Cinqfontaines, faced the grim fate of deportation. Some were sent first to ghettos, such as the 323 Luxembourgers sent to the ghetto in Łódź/Litzmannstadt, Poland, in October 1941. Others were sent straight to death camps, including the one at Łódź/Litzmannstadt, as well as Auschwitz, Theresienstadt, and Izbica. 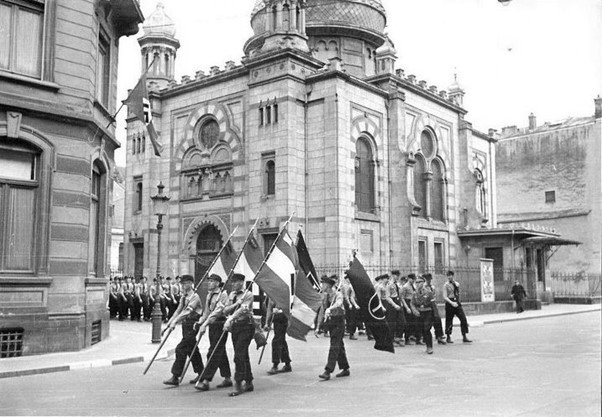 It is within this context that we come to Victor Bodson, who served as Luxembourg’s Minister of Justice, Public Works and Transport until 1940 and then in exile, and would later chair the House of Representatives as well as serving as Luxembourg’s European Commissioner.

Bodson was an intriguing character. He trained as a lawyer in Strasbourg, Algiers and Montpelier, before becoming involved in politics in 1930 when he joined the Socialist Workers’ Party. From there he became a councillor in Luxembourg City, and was also an activist campaigner who supported the Republicans in Spain’s civil war. Outside of politics, he was a keen swimmer, water polo player and boxer. He was also a champion motorcyclist, winning several races in Luxembourg between 1926 and 1930 before becoming president of the Motor-Union Luxembourg and general secretary of the Grand-Ducal Automobile Club.

It is for his actions during the war, however, that he is best remembered. He played a role in the mysterious death of the Nazi Gauleiter of Luxembourg, Gustav Simon. He also, significantly, helped save Jews during the Holocaust.

According to Yad Vashem, the World Holocaust Remembrance Center in Israel, Bodson owned a house in the small Luxembourgish village of Steinheim, which sits on the border with Germany marked by the River Sûre. Another source claims that Bodson never owned a house in Steinheim, but in fact used the local hunting lodge as a meeting point for the onward transport of refugees.

Irrespective of the precise details, the sources agree that from 1933 until the period around the Nazi invasion of May 1940, Bodson helped set up an underground escape route for Jews looking to get out of Germany.

They first had to cross the River Sûre, and then find their way to the house (or hunting lodge). Here, they would change out of their wet clothes, before Bodson personally escorted them to a safe haven, prepared in advance by friends. Bodson adapted his vehicle, fitting a special device so that escapees could travel unnoticed.

After the Nazi invasion, Bodson became part of the Luxembourgish government in exile in Montreal, Canada. From here, he continued to help refugees escape the Grand Duchy, applying for entry visas to the United States and other countries. In 1942, he was even labelled as ‘Wanted’ by the Gestapo for his role in helping people they deemed to be enemies of the state.

Bodson’s name appeared in a Wanted book distributed across Europe by the Gestapo. / © The Righteous among the Nations, Yad Vashem, Jerusalem

For his efforts, on 14 July 1971, Yad Vashem recognised Bodson as Righteous Among the Nations, the only occasion on which actions in the Grand Duchy have been recognised in this way. It signifies that the State of Israel officially recognises Bodson as a “righteous gentile” (non-Jew) who risked his life to save Jews from the Nazis. Yad Vashem believe that Bodson’s actions saved around 100 Jews. In his letter of thanks, Bodson said that it is everyone’s duty to help. 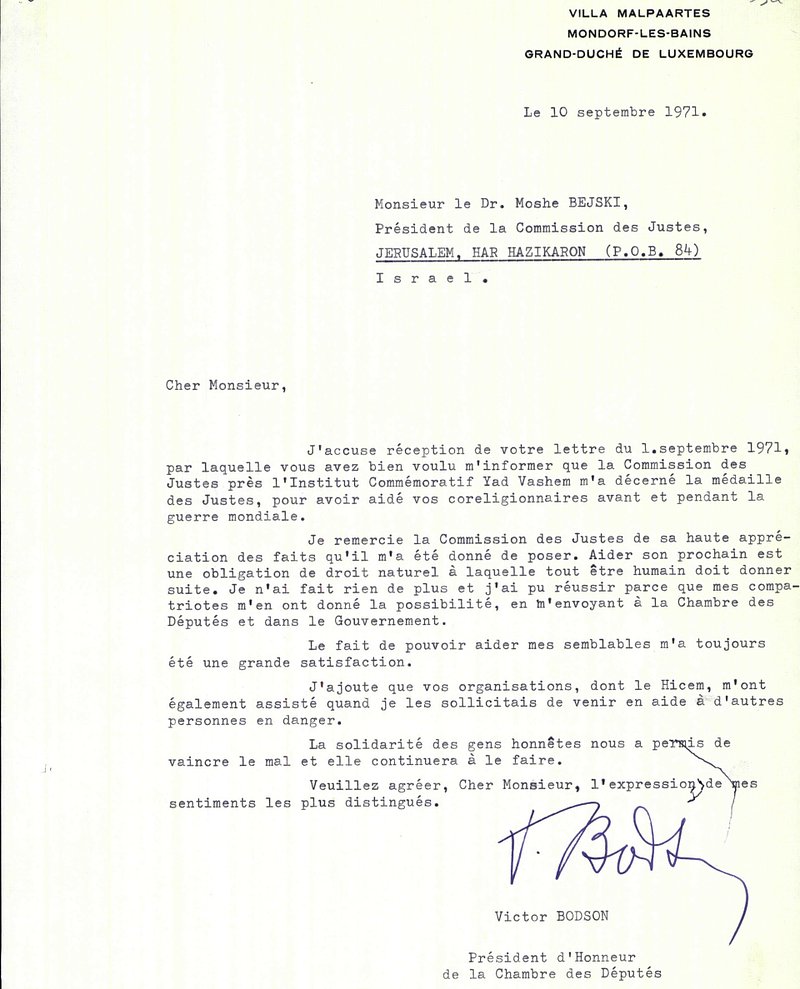 Bodson’s letter of thanks to Yad Vashem. / © The Righteous among the Nations, Yad Vashem, Jerusalem

We cannot "erase the past"

In an interview with the Jerusalem Post in March 2021, Luxembourg’s Prime Minister Xavier Bettel explained the significance of Bodson’s actions. For Bettel, Bodson is representative of others who helped but have yet to be formally recognised. Some people who helped, he believes, have never been discovered.

Bettel himself has Jewish ancestry, through his grandfather who was born in Warsaw. He acknowledges that not all Luxembourgers were heroes during the Second World War, and told the Jerusalem Post that he apologized to a Jewish audience a few years ago for the acquiescence or collaboration of some in Nazi-occupied Luxembourg. While recognising the past, he nevertheless hopes that while Luxembourg cannot “erase the past”, it must learn from what the Nazis did during the Second World War and build towards a better future. 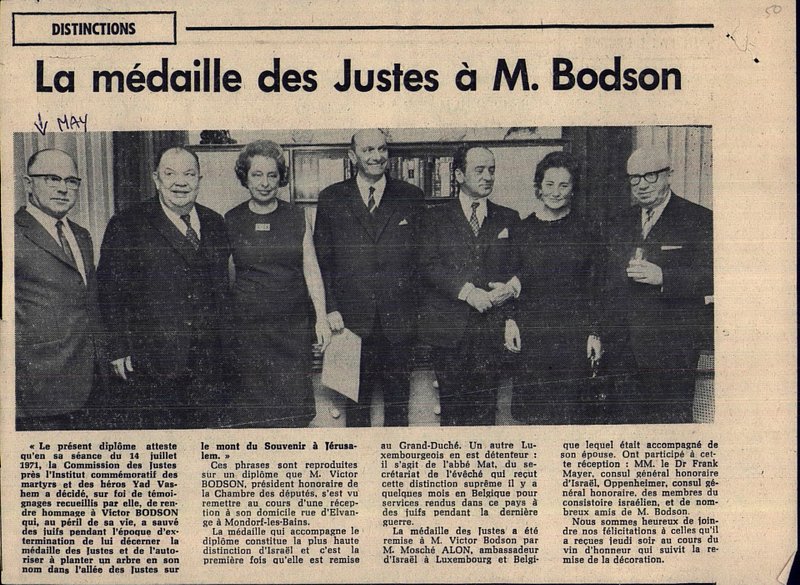 This newspaper clipping from 1971 shows the occasion on which Bodson (centre) received a diploma from Yad Vashem during a reception held at his house on rue d’Elvange in Mondorf-les-Bains. / © The Righteous among the Nations, Yad Vashem, Jerusalem

Stories like Bodson’s in no way excuse Luxembourg’s troubled Nazi past. Indeed, in 2015 Luxembourg formally apologized for its authorities’ collaboration in the rounding up of Jews for deportation. In 2019, the Grand Duchy faced criticism for its restrictive restitution laws, which made it difficult for the relatives of those who fled the Nazis to reclaim lost property and assets. It was only in January 2021 that the laws were reformed, in an historic agreement signed between the Luxembourgish state and the Jewish Community of Luxembourg, World Jewish Restitution Organization, and Luxembourg Foundation for the Memory of the Shoah.

Yet remembering Bodson is also a way of recognising a brighter side of Luxembourgish history. Of acknowledging the horror while pointing to an act of resistance which demonstrated how some citizens showed solidarity with their Jewish neighbours. As part of the terms of the agreement, Luxembourg agreed to pay one million euros to Holocaust survivors who were in the Grand Duchy during the Nazi occupation. The state has also purchased the old convent at Cinqfontaines and is turning it into an educational memorial centre.

It is only by reflecting on, and learning from, the past that we can hope to avoid history repeating itself.