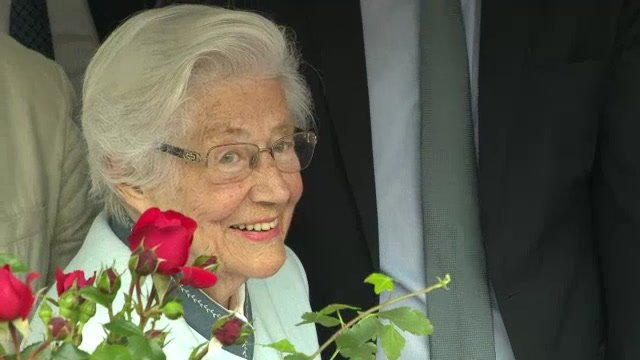 A brilliant poet, a lifelong ambassador for Luxembourg's literature scene, and the Grand Duchy's foremost writer: Anise Koltz does not only boast an impressive career, but her art itself is also a continuous analysis of the country's unique cultural and linguistic landscape.

While it can sometimes seem like literature, books, and the people who write them struggle to keep up with the changes of an age of instant and on-demand products and services, it is worth remembering that even in a tiny country such as Luxembourg, there are still writers whose name carries the same weight as those of their famous predecessors.

One such writer, a poet actually, is Anise Koltz. The Grande Dame of Luxembourgish literature, as she is often called, is one of the Grand Duchy's most illustrious artists. A look back at her life, and particularly her art, quickly makes it apparent how this came to be.

I. A lifetime of literature

Anise Koltz was born on 12 June 1928 in the Eich neighbourhood of Luxembourg City as the daughter of a Luxembourgish mother and a Belgian father. Her birth name was Luise Anna Blanpain. She visited Lycée de jeunes filles in Luxembourg City, but later left the secondary school before graduating and married the future director of the Mondorf thermal bath, René Koltz.

Seeing as Koltz attended secondary school between 1940 and 1947, she experienced the school system under the Nazi occupation first-hand. The treatment and abuse she and her husband suffered from the German invaders were to mark her entire life and writing – something which we shall see in detail in the second section.

After the war, she started committing herself more and more to her writing career and attended literature events and meetings between poets. In 1962, Koltz and her husband launched the Mondorfer Dichtertage (lit. Mondorf Poetry Days, also known as the Mondorf Literary Days), which quickly became one of the most prestigious literature events in continental Europe.

In 1996, Koltz founded the European Poetry Academy alongside the French poet Alain Bosquet. She is also a member of the Académie Mallarmé in Paris, as well as both the Belgian and French PEN Club.

Art as struggle - Art as salvation

The story of Anise Koltz and her art is a fundamentally human and fascinating example of the symbiose between the artist as a living being and their creative work.

As mentioned above, Koltz attended secondary school in the 1940s during the occupation of Luxembourg by the Nazis. The latter transformed the Luxembourg school system into a ruthless brainwashing scheme, destined to produce them the perfect German Reichsbürger that they desperately wanted the citizens of Luxembourg to be. The use of the French language was suppressed, and German became omnipresent.

As a student in this system, Koltz was practically forced to intensively study the German language and its literature – or rather, the literature and authors deemed worthy in the eyes of the Nazis. Nevertheless, she quickly became quite talented in its use and thus German became the language in which Koltz was to write her first major literary works in.

Between 1953 and 1973, Koltz published short stories (many of which were fairy tales) and poetry collections in German and sometimes Luxembourgish.

While these early works already focussed on existential questions and themes such as the absurdity of life in the post-war era, it was a great personal loss that was to trigger a radical change in her artistic work.

In 1971, Koltz' husband died from the long-term effects of the torture he endured at the hands of the Nazis during the occupation. Following his tragic passing, she decided to abandon German as a literary language altogether and from that point onwards wrote and published her works exclusively in French.

Koltz went on to publish numerous poetry collections, first in Luxembourg and then in France. In 2015, Koltz became the first Luxembourgish author to be featured in the poetry selection of the prestigious publishing house Gallimard with her book Somnambule du jour.

Her poems have been translated into numerous languages, including (but certainly not limited to) French, English, Spanish, Dutch, Portuguese, Romanian, Hungarian, Bulgarian, Polish, Russian, Swedish, and Macedonian. Koltz herself has also translated the works of other authors, such as the Senegalese poet Léopold Sédar Senghor or the Belgian poet Andrée Sodenkamp.

From an artistic point of view, Koltz' œuvre is monumental, not only regarding the technical finesse and the surgical precision with which she selects, weighs, and chooses words and syllables for her poems, but also for its themes and the cultural, linguistic, even ontological struggle which her work represents.

The dichotomy between German and French, an ambiguous relationship which has marked the history and evolution of the Grand Duchy perhaps like no other, is at the core of the person and the poet Anise Koltz. It is thus no wonder that she ended up becoming Luxembourg's unofficial poet laureate.

The importance of Anise Koltz cannot be overestimated. Not only is she without a doubt Luxembourg's greatest poet currently alive, but she also did more to promote the Grand Duchy as a cultural and artistic hub than all of the Ministers of Culture of the past decades combined.

The Mondorf Literary Days brought together some of Europe's most brilliant writers and ensured that instead of a shady tax haven for greedy companies, Luxembourg was seen as a diverse, multi-cultural society in the heart of Europe, which could use its more "culturally fluid" experience to act as a mediator between the more self-affirmative cultures of its neighbouring countries. Koltz herself also attended international meetings of poets and was in regular correspondence with writers from all over the world.

Koltz is also a political and social activist and has campaigned for human rights as well as voiced her support for persecuted poets and victims of major disasters.

Everyone even slightly interested in Luxembourgish culture should thus have at least heard of Anise Koltz, the Grand Duchy's foremost writer and laureate of numerous awards. Every now and then, her name even comes up among contenders for the next Nobel Prize for Literature. And even if the odds for a Luxembourgish author to win this most prestigious of all literary awards are, truth be told, not the best, it would certainly be a choice that would acknowledge her more than respectable career.