Besides its numerous castles, museums and walking trails, Luxembourg also boasts an array of abbeys that are well worth a visit. Here are a few you might want to mark for a small day trip over the Easter break. All of them are located near other popular natural or historical sites, so they are well suited for a combined visit.

Located in the heart of Luxembourg City, in the Grund, this is probably the most well-known of the abbeys and one of the 'typical' pictures that would come up in an online search about Luxembourg.

The Neumünster Abbey displays a beautiful arrangement of buildings and is frequently visited by tourists and locals alike. The abbey was built in 1606, when the previous abbey located on the Altmünster plateau (between Clausen and the Fishmarket) was destroyed. Unfortunately, the new abbey burned down, but was then rebuilt in the same spot in 1688.

Over the years the abbey was put to use for various activities, from serving as a hospital and orphanage, activities more commonly associated with monasteries, to being used as a prison. The latter occured after the French Revolution, when the monks inhabiting the building were forced to leave. The premises were even turned into a state prison due to lack of space for prisoners elsewhere between 1869 to 1985. During WWII it was used by the Gestapo to lock up political prisoners, before transferring them to either another prison or a concentration camp.

Today not much is left of this rather eventful and arguably dark past. The abbey was completely refurbished and in 2004 it opened to the public as a cultural centre. It now hosts a number of events such as art exhibitions, plays, readings, concerts, and festivals, for which the extensive court yard, looking up to the city, is ideal. The latter is also a popular spot to meet friends on a warm summer’s day.

More information on current events can be found here, and they are also frequently included in our weekly What's On Weekend Guide. The Abbey of Echternach is built on the s oil of a former Roman Villa and was established by St. Willibrord, now the patron saint of Luxembourg, in 698, making it the oldest abbey in this list. Willibrord also opened the first church of Echternach in the year 700. An influential figure, Willibrord convinced a number of monks to settle in Echternach, slowly turning the abbey into a widely-respected institution and Echternach into a powerful city.

Willibrord’s remains were buried in the church, making it a popular destination for pilgrims. The monastery’s influence grew steadily and the monks produced several important pieces of work, including the Codex Aureus in the 11th century, a gospel book entirely written in gold ink. It is currently displayed in Nuremberg.

The abbey underwent several re-constructions that changed its original Romanesque construction style, but after being severely damaged during WWII it was rebuild once again in Romanesque style. The vaults of the abbey have now been transformed into a museum, dedicated to the history of the abbey, and in which you can find facsimiles of the previously mentioned Codex Aureus.

Echternach and the abbey are now probably best known in relation to the yearly hopping procession, which is held in honour of St. Willibrord on Whit Tuesday and attracts a large number of visitors each year.

More information about the museum can be found here The Abbey of St. Maurice and St. Maur in Clervaux was built in 1909, and French monks settled there after their abbey was shut down. As with the previous two monasteries, WWII was responsible for partly damaging this abbey and the monks had to leave after the Germans seized the place. After their return in 1947, the site was slowly re-built.

In contrast to the other abbeys, Benedictine monks still live here, dedicating their life to work and praying. They are also known for their Gregorian Chants and have even recorded several albums. The monastery offers 20 rooms for men and separate lodgings for women, who are looking for calm and spirituality. While visitors from every religious background are welcome, the community requires people to take part in certain prayers and services. Students sometimes decide to go to the monastery to concentrate on exam preparation in this simple environment free of distractions. One of the most notable people going on a retreat here was the Icelandic author and Nobel Prize winner Halldór Laxness.

Part of the abbey is a small shop, selling various souvenirs and apple juice produced by the monks. There is a morning mass at 10 every day and on each first Monday of the month, the abbey can be visited on a guided tour with a monk after said mass.

More information about how to book the tour here. This abbey was constructed by the same architect as the abbey in Clervaux in the beginning of the 20th century. During WWII it served as internment camp for Jews, brought there before being deported to concentration camps. It was the only one of its kind and approximately 300 Jews were held there over the course of the war. In 1969, a memorial was erected as a reminder of this dark part of the monastery’s history and to commemorate the people who were held there.

The abbey was turned into a retreat and meditation centre in 1973. Weeklong fasts that include informational courses on nutrition, walks in nature, as well as guided meditations are now regularly hosted there. Because of its calm location near the Our river the abbey is the perfect place for such a break.

More information about that here (website only in German). 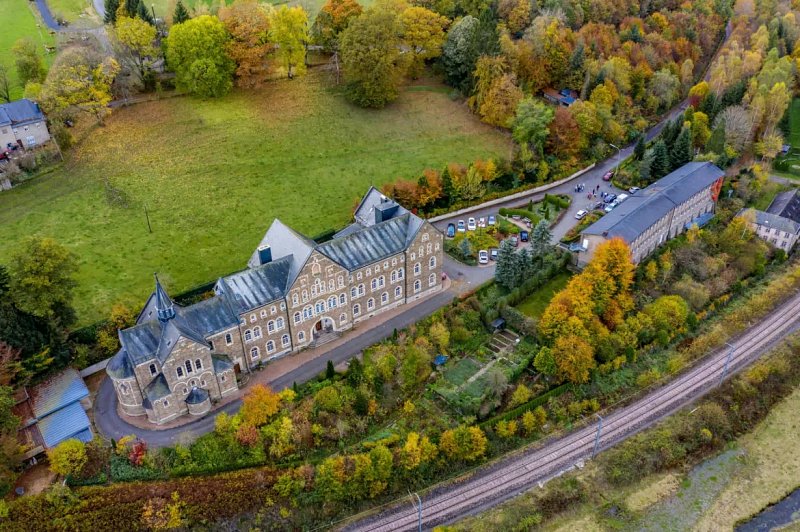