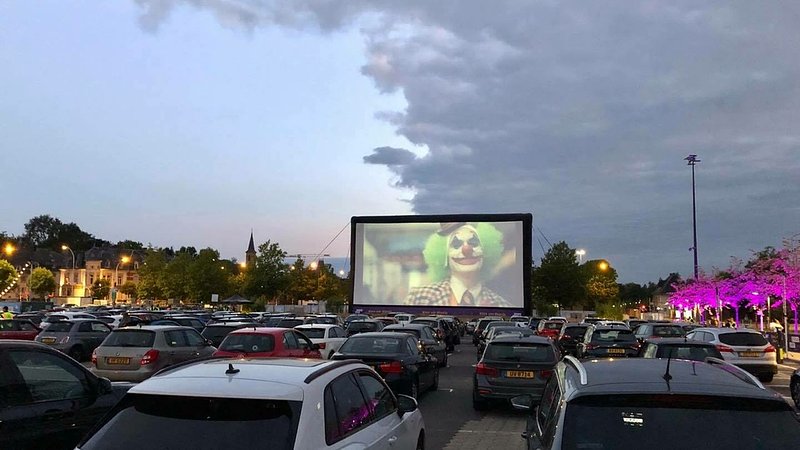 With cinemas forced to close during the lockdowns caused by Covid-19, drive-in cinemas started to pop up again. Even though cinemas have now reopened in Luxembourg, these cinemas remain popular because their very nature facilitates social distancing. But do you know the history behind drive-in cinemas?

Outdoor film screenings started to appear in the early 20th century — people would gather in public spaces, such as beaches, and watch a silent film together. Occasionally, they were even in their cars, but there was still no sound as the cars were not yet equipped with a radio.

The true origin of the drive in cinema was in 1933, when a man from New Jersey, Richard Hollingshead, patented the concept. Apparently, he got the idea because his mother would not comfortably fit in standard cinema seats. He started experimenting at home and finally came up with a ramp system that would allow every car to see the screen properly. He opened the first drive-in cinema with 400 available spots, the entry price was 25cents per car and per person, offering people a rather cheap form of entertainment. The films now also had sound, coming from speakers he had placed next to the screen, however this solution was far from perfect and sound problems occurred frequently.  Unfortunately, he had to close his cinema after only three years, but the concept was born and would become more popular in the following years.

Drive-in cinemas might be an American invention, but during the peak of the popularity in the 50s and 60s they could be found all over the world. After WWII, car ownership and populations in rural areas started to rise, which contributed to a surge in the number of drive-in cinemas, with 4000 operating in the US alone. People liked these cinemas because they could enjoy a film in the comfort of their own car and bring their small children as it did not matter if they were noisy. This gave the drive-in cinemas a more informal atmosphere than their indoor counterparts, appealing to people of all ages.

Apparently, they were also a popular destination for first dates because the car offered some privacy. In addition, these cinemas were cheaper than ordinary cinemas and people from the suburbs didn’t have to drive into town to see a film, making attending a screening a more flexible experience. However, drive-in cinemas often showed different and less popular films than indoor cinemas and you would usually not expect to see the latest Hollywood release there. The introduction of sound systems into cars also contributed to the rising success, as the sound could now be played from the car radio.

At the end of the 60s their popularity started to decline — the invention of colour TV, VCR and video rental services made it easy to just be entertained at home. And while the car offered quite a lot of comfort, it was nothing against the comfort of your own living room. Furthermore, the price of the huge spots of land that were needed for the cinemas started to be too high. Because drive-in cinemas had only limited operating hours and were dependent on the weather, it was more profitable to sell the land. Even though their numbers declined they were never completely gone and in the 90s they started to get a retro appeal, which made attending them more fashionable again.

Drive-in cinemas have since been a summer staple in many countries, and especially now during the pandemic they again start to appear more and more frequently all over the world. Luxembourg has also seen a rise in drive-in cinemas, for instance in Mamer, Echternach and also recently in the city centre. Although the former two are closed now you can still get the experience of watching a film in your car in the city centre. At the ‘Kino um Glacis’, organised by the City of Luxembourg and The Cinémathèque, you can enjoy a variety of new and older films, from 17 July until 1 August.

This is not only a drive but also a walk-in experience, where people can book a lounge in which up to four people can watch the film together, while, of course, observing social distancing. Until 13 September a drive-in food village will also be open next to the cinema, providing snacks which would usually be available at the traditional ‘Schueberfouer’ , which had to be cancelled. More information on pricing and the programme can be found here.