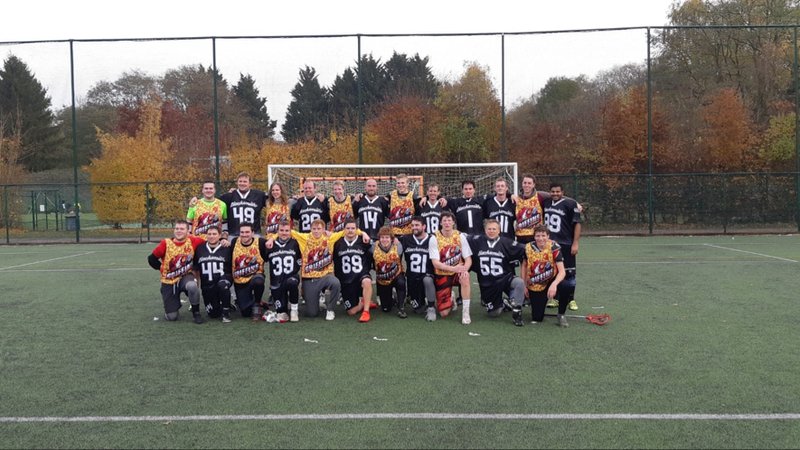 The Luxembourg Blacksmiths played their final league game of the 2019 season on Sunday 24 November against the Griffins, a new team from Brussels sporting a number of Belgian international players as well as promising youngsters.

The Blacksmiths entered the game with a record of two wins and one loss, looking to extend their winning streak to three. The team had to adjust for the absences of several key players including president P. Bingen, face-off specialist S. Salvatore and trust midfielders O. Griebel and M. Salvia. This also meant the coach Schmidt would play in a roster of 13 players. Defender #55 G. Ritts played his first game after injury.

Coach Schmidt commented on the roster "A different team does not mean we have a reason for this loss. We had the potential but did not execute well enough". Luxembourg had started well, displaying a confident if unspectacular style of play taking several leads and eventually produced a three goal lead to 5-2 early in the second quarter.

The Griffins then began some offensive and defensive adjustments and were rewarded with three fast goals, entering the second half with a 6-5 lead on the back of three consecutive goals by #8 O. Thomasson. The Luxembourg defense had managed to contain the Griffins main scoring threat but faced prolonged defensive spells against a Griffins side that exploited small gaps in the otherwise effective Luxembourgish physical defense.

Throughout the game, the Blacksmiths were unable to capitalise on the team’s eventual MVP’s strong performance at the face off x – midfielder #39 K. Giovagnoli stood in for # 77 S. Salvatore and won most 1 vs 1 situations. Persistent play by the Griffins then often forced players like midfield/attack hybrid D. ‘Scusi’ Seuchter to win a large number of heavily contested groundballs.

Winning groundballs, comparable to basketball’s rebounds and crucial for securing possession of the ball, proved to be challenging for Luxembourg throughout the second half. The third quarter started badly for Luxembourg who looked to repeat their early start from the beginning of the game but found themselves ambushed by two goals by #5 G. Lens and #8 O. Thomasson who scored six goals in total.

At 8-5, coach Schmidt called time out and reset the team, putting the focus on stemming the offensive tide first to then cut and eventually overcome the deficit. The Griffins next offensive possessions of several minutes tested the defense but a disciplined approach of the defensive line (#26 C. Forbes, #14 J. Kirch and #89 N. Haria) in front of goalie #1 K. Brillen was enough to avoid a worsening deficit.

#39 K. Giovagnoli and #69 R. Jegen, who keeps playing very well then closed the deficit to 8-7 with one goal each, the closest Luxembourg would get to equalizing in this. Jegen and Brillen showed very strong performances in their positions and #21 A. Robilliard now contributed on top of his earlier goals also on defense and #69 Jegen added midfield shifts to his higly effective attack play.

The Griffins however had different plans. After their 8-7, they secured four further goals while Luxembourg could only add one, leaving the final score at 12-8. The Luxembourgish efforts to close and overcome the gap were eventually stifled by a series of penalties incurred on the defense, offering the Griffins ample opportunity to hold the ball and also increase their goal tally.

Coach Schmidt commented on the game "Losing is never fun, in particular where we had shown that there is more to us than travelling to away games and always lose. The Griffins showed us what we lacked in their clinical finish, strong groundball player and much better consistency in most categories. Saying that – a 2-2 record, rank 3 and much improved goal differences is more than we would have dared to hope for as a December 2019 interim result".

The Blacksmiths will now enter their next preparation cycle for their games in early 2020 and players appear keen to get back into it already. Attack captain #21 A. Robillard commented "We know that if we fix a few small things well, we can become much better", something coach Schmidt also clarified: "We are not done. We look up in the table, clearly targeting Opueye Foxes and Ixelles Griffins for wins on top of repeating the past wins. If we do our homework, we can do it. Griffins gave us a good lesson in how to come back from a deficit and then win it. We will be ready".

Luxembourg Lacrosse invite all interested players, regardless of ability and experience, to join the club (offering men’s, women’s and youth Lacross all year). Please contact coach Henning at schmidt@lacrosse.lu for more details and any question you might have.