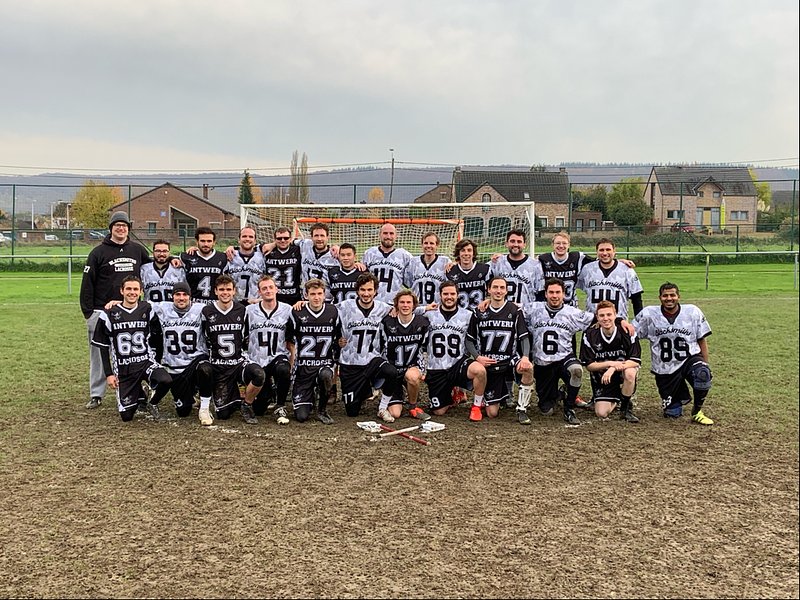 The recent first ever home win against Namur Knights still fresh in the team’s mind, the Blacksmiths travelled to Belgium to Namur for a match against the recently founded Antwerpen Armadillos. With a team strength of 14 plus player coach H. Schmidt several changes were required. Cory Forbes could not bolster the Luxembourgish defense as in the last match and goalie L. Föhr was unavailable on short notice.

These absences resulted in changes across the team. For the defense, a brand new keeper joining from Trier Legionäre, K. Brillen (#6). Brillen showed a strong performance in his first ever competitive game which also produced a rare but entirely deserved ‘shut out’ underlining the ‘substantial promise Brillen showed in the cage’ as described by coach Schmidt.

All positional changes worked very well on this day, with Luxembourg original Melvin Hatto #44 returning from several weeks of injury with a dominant performance on defense and D. ‘Scusi’ Seuchter #41 showed that his speed in attack play translates very well into midfield. The attack line saw the addition of #7 Pit Bingen. The game had been preceded by a practice camp with almost all of the roster, an investment that later paid off.

The Armadillos brought eleven players to the game including three brand new players, they also brandished their top scorers and in #77 M. van Steirteghem a formidable goal keeper. The game began sluggish - #77 S. Salvatore could produce at the face-off x but had broken his stick in the first face-off, forcing him to play with unfamiliar equipment.

Luxembourg international Richie Jegen #69 had begun the scoring at just under three minutes and finally broken a dry spell littered with near inexplicable bad luck when it came to making the first score of the season. Playing in a dedicated offensive midfield role, Jegen would go on to score three goals, reporting his first ever Hattrick in his first scoring game. Jegen’s well placed shot for the1-0 had not been followed by comparable efforts and #77 M. van Steirteghem racked up substantial saves. While he would ultimately report 22 saves, Luxembourg did find the net after a ten minute drought, extending the lead to 2-0 after the first and 3-0 after the second quarter. 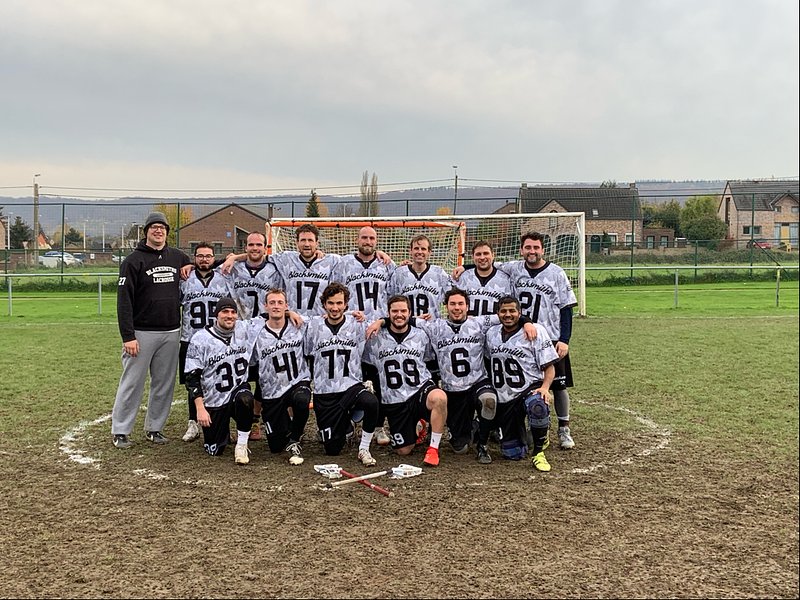 The opposition continued to play hard and committed throughout, forcing Luxembourg’s Blacksmiths to play with high pressure throughout to compensate for the lack of goals in the first half with continued dominance over ground balls and overall possession. The defense around #89 N. Haria and #14 J. Kirch continually had to pressure #10 J. Tan and adjust against strong transition play by the Armadillos, limiting the shots on goal and allowing #6 Brillen to report a clean sheet with six saves.

The third quarter was also where Luxembourg’s advantage in roster size and possession began to translate, #69 Jegen (twice), #21 A Robillard and #17 O. Griebel added to the tally, leaving Luxembourg up 7-0 after three quarters. Griebel not only scored two goals but dominated ground ball and transition play throughout the play, underlinging his important role for the Blacksmiths’ midfield.

The final quarter saw #21 Robillard score twice more and #77 S. Salvatore cap off his strong performance with foreign equipment with a goal too, leaving the final score at 10-0. Coach Schmidt commented on the game ‘First of all – their goalie was incredible. He forced us to produce very high grade shots to even have a chance to get a goal. And for a team this new, you can already tell these guys will be no push-over next time. For our team – this was a hard fought win, Antwerpen forced us to be at our best for 75 minutes. We now look forward to the final 2019 game on Sunday, 24 November against the Griffins in Ixelles.’

The second win leaves Luxembourg for now at a record of two wins and one loss. The next game against the Griffins, sporting league high scorer M. vn Laethem with 16 points (13 goals, 3 assists) and a second rank in the five team division. Luxembourg now eye mid table winter break rank. Coach Schmidt commented on the outlook: ‘Griffins will be tough but we won’t travel thinking we lose there. It’s our chance to improve more and get to 3-1 record. As for 2020 – we want to continue to improve and build the core of the team travelling to Poland and playing for Luxembourg.’

For more information on the team, how you can participate and details about the great team sport Lacrosse, please check lacrosse.lu or contact coach H. Schmidt at schmidt@lacrosse.lu.