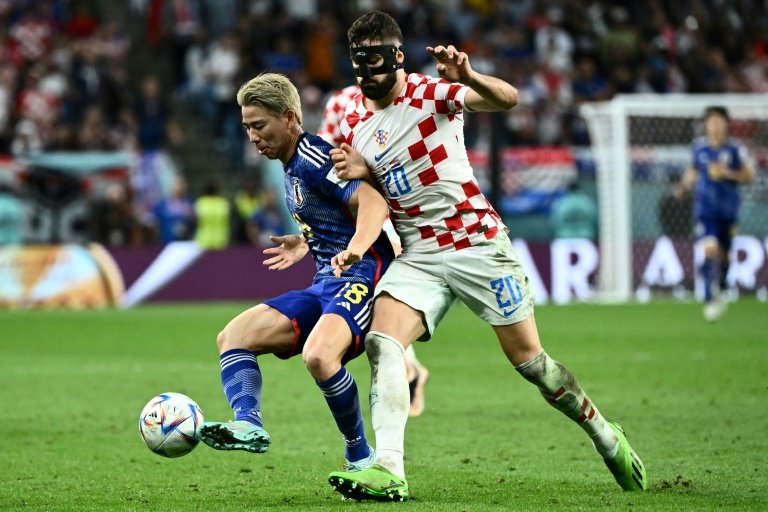 The Qatar World Cup was billed as a last chance for Croatia's ageing stars to win a major tournament, but the youngest player to feature for Zlatko Dalic's side, Josko Gvardiol, has been vital in their run to the quarter-finals.

Gvardiol's next test is the unenviable task of stopping Brazil's fearsome forward line in the last eight on Friday.

The 20-year-old centre-back has played every minute of Croatia's four matches so far, putting in brilliant defensive performances in the goalless draw with Belgium and the tense penalty shootout win over Japan in the last 16.

Gvardiol has been linked with several of Europe's biggest clubs, including Real Madrid and Manchester United, after a breakthrough season last term for RB Leipzig.

He has further enhanced his reputation as a complete defender on football's biggest stage, despite wearing a protective face mask after suffering a broken nose last month.

The defender showed multiple facets of his game against Belgium when his team needed to avoid defeat to reach the knockout phase and dump out the world's second-ranked side.

Gvardiol delighted the crowd with one mazy dribble from inside his own half, although it was a last-ditch sliding tackle to prevent Romelu Lukaku from scoring a late winner which proved crucial.

Last year, a teenage Gvardiol was criticised after being part of the side that lost 5-3 to Spain in an extra-time thriller at Euro 2020.

He particularly came under fire for mistiming a challenge and being left on the floor as Ferran Torres scored Spain's third goal.

Coach Dalic has been repaid for his faith in the youngster during the World Cup, as veteran Domagoj Vida, with 100 caps to his name, has been left watching from the bench.

"Josko was very young. We put our confidence and trust in him. He was playing for Leipzig and he did very well," said Dalic.

"I believe that you can't be a good player without the support of the coach.

"He made mistakes and it's normal. He will mature...

"He will continue to make mistakes but in order to be a real player you need to adopt a certain attitude of rising above it. Josko has really justified our confidence."

Gvardiol has reportedly been closely followed by Real and several Premier League clubs, but this is the first time his qualities have been beamed to a wider audience.

His assuredness on the ball and turn of pace have made pundits and fans take notice.

"He has been my favourite defender to watch in the tournament so far," former Manchester United centre-back Rio Ferdinand told the BBC.

"He has got a great presence, he is happy for the battles, very physical and has a wand for a left foot."

Gvardiol has put any previous mistakes from the Euro behind him and credits Croatia's much-vaunted midfield trio of Luka Modric, Mateo Kovacic and Marcelo Brozovic for protecting the defence.

"It was different circumstances. Now I am facing different opportunities," he said.

"When you come to the national team, where Kovacic, Brozovic and Luka Modric are the midfielders, half of your problems are resolved already. You have a lot less on your mind."

"I would prefer the senior players to take the penalties but of course if the situation arises and I'm asked to take one, I'm not scared of it," Gvardiol added.

If he can keep Neymar, Richarlison, Raphinha and Vinicius Junior at bay at Education City Stadium, Gvardiol would prove Croatia have a bright future even after Modric and co hang up their boots.