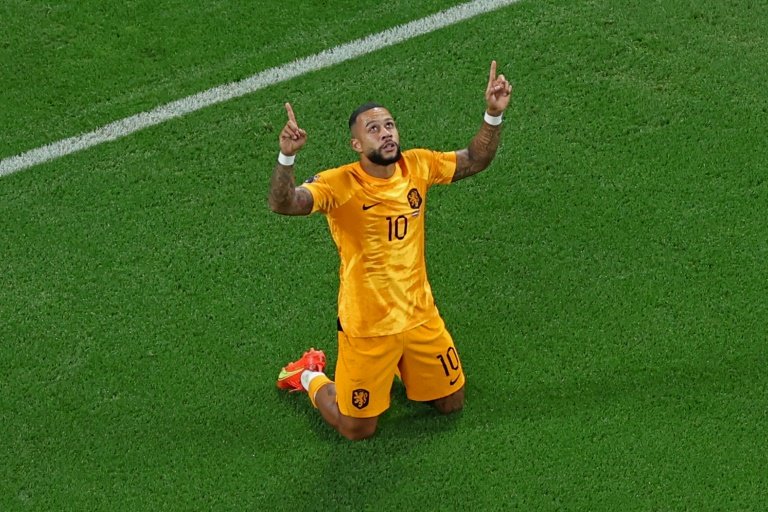 Outspoken and stubborn, Netherlands coach Louis van Gaal is not one to go against his principles, so the inclusion of an ailing Memphis Depay in his World Cup squad underscored his unwavering belief in the Barcelona forward.

Depay injured his hamstring on international duty in September and his recovery took longer than expected, but Vaal Gaal was willing to roll the dice on the fitness of the country's second leading goalscorer.

"Memphis has been so important for this group, not only as footballer but also as a human. So yes, I kept a space open for him," said Van Gaal, when announcing his squad last month.

"He is an extraordinary player and so I have set aside my principles because I consider him to be incredibly important to my team," Van Gaal explained once arriving in Qatar.

"I explained this to the players, that I am doing all this for Memphis, and the players accepted this."

Depay made his international breakthrough as a 20-year-old as the Dutch finished third under Van Gaal at the 2014 World Cup, but was part of a team that missed out on a place in Russia four years ago.

He ensured there was no repeat failure with 12 goals in 2022 World Cup qualifiers -- joint most in Europe with Harry Kane -- and is one of just three survivors from the 2014 squad in Brazil.

Van Gaal has cautiously eased Depay back into the side, using him as a substitute in the Netherlands' first two games of the tournament.

He helped set up one of the goals as the Oranje won 2-0 against Senegal in their opening match, and played the second half of a 1-1 draw with Ecuador.

Depay then made his first start in over two months as the Dutch clinched their spot in the knockout rounds with a 2-0 victory over Qatar.

Frenkie de Jong turned home Depay's shot from close range to seal the points which sent the Dutch through to a last-16 tie with the United States.

Facing the talented but inexperienced Americans, Depay capped off a brilliant 21-pass move by sweeping home the first goal in a 3-1 win.

It was his 43rd goal in 85 caps for the Netherlands since his 2013 debut, nudging him above Klaas-Jan Huntelaar and to within seven of Robin van Persie's Dutch scoring record.

"There is a big difference if Memphis Depay plays or not," said Van Gaal, comparing his role to that of Arjen Robben's at the 2014 World Cup.

Depay gathered his team-mates round to give a pep talk after the Qatar match, much like Robben did during their run to the semi-finals in Brazil.

"Maybe Memphis has adopted this from Arjen. That could well be the case. I only applaud it if players take these kind of actions," said the coach.

"Obviously he is a quality on his own. So was Arjen back then. And so is Memphis: A one of a kind player."

Another sign of Van Gaal's unshakeable faith in Depay was his ironic response to the player's public admission that he would prefer to play alongside Steven Bergwijn, with Cody Gakpo instead occupying the number 10 position, in the Netherlands' 3-4-1-2 formation.

"He might just state his opinion. I don't know whether that is sensible, but it can happen. Everybody is allowed to have their own opinion. Especially in the Netherlands," said Van Gaal.

Reduced to a reserve role this season at Barcelona following the arrival of Robert Lewandowski, Depay could be on the move in January -- with a return to Manchester United not beyond possibility.

It was Van Gaal who initially brought Depay to Old Trafford in 2015, but neither hit the heights expected and both were gone 18 months later.

Reunited in the national team, they are dreaming of leading the Netherlands -- unbeaten in 19 games since Van Gaal took over for a third spell in August 2021 -- to a first World Cup title.

Standing in their way in Friday's quarter-final are Lionel Messi's Argentina, who broke Dutch hearts eight years ago when they won a penalty shoot-out to reach the final.