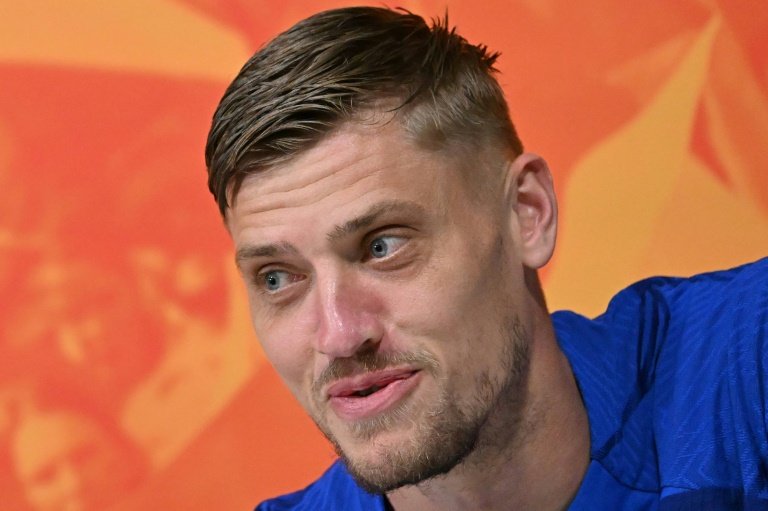 Two years ago, Dutch goalkeeper Andries Noppert's career was going nowhere and he thought about quitting football. Now he is preparing to face Lionel Messi and Argentina in a World Cup quarter-final.

Noppert was a back-up in the Dutch second division with only a handful of professional appearances under his belt as recently as 2020, and considered quitting to join the police.

He decided to stick with it and his career took off after joining Go Ahead Eagles, before a subsequent move to Heerenveen caught the eye of Netherlands coach Louis van Gaal.

Now the 28-year-old is first choice for the Dutch at the World Cup in Qatar, having only made his international debut in their tournament opener against Senegal.

He will go up against Argentina in Friday's quarter-final and he is unfazed at the prospect of facing Messi from the penalty spot.

"It depends on the moment -- he can also miss and we've seen it in games in this tournament," Noppert said on Wednesday.

"He is the same as us, he is human. For sure he is good, but for sure I can catch penalties."

Noppert has played all of the Netherlands' games so far in Qatar, conceding only two goals on their way to the quarter-finals.

The tallest player in the tournament at 6 feet 8 inches (203 cm), he has won praise for his shot-stopping ability and command of his penalty area.

But his inclusion in the team still causes him to smile in amazement, having come so far in such a short time.

"When you are a small guy, I think you dream about going to the World Cup," he said.

"For sure I also dreamed about it but when you see my career, I put the dream away because I think it's not possible any more.

"But I keep fighting, keep pushing and I think there is only one coach who can bring me here, and that is our coach."

Van Gaal sprung a surprise by leaving out long-term Dutch number one Jasper Cillessen from his World Cup squad.

Instead he picked Noppert along with Feyenoord's Justin Bijlow and Ajax's Remko Pasveer -- a trio with only eight caps between them before the tournament began.

The uncapped Noppert was still expected to travel as a back-up, but Van Gaal thrust him into the starting line-up and he has not looked back since.

"For me every game is the same -- I am going into the nets to catch the ball," said Noppert.

"I have in my opinion the best defence in front of me so I'm not worried about the game that we play. The goal is that we win the title."

Noppert is full of praise for Van Gaal, who he says gives the players left on the bench "a good feeling".

He knows what it is like to be far from the action, having spent most of his career as a back-up at clubs such as NAC Breda, Foggia and Dordrecht.

Now he is front and centre as the Netherlands look to win the World Cup for the first time, and he is taking it all in his stride.

"This is the most important thing, that I don't get more pressure. I don't think so. I don't feel it."