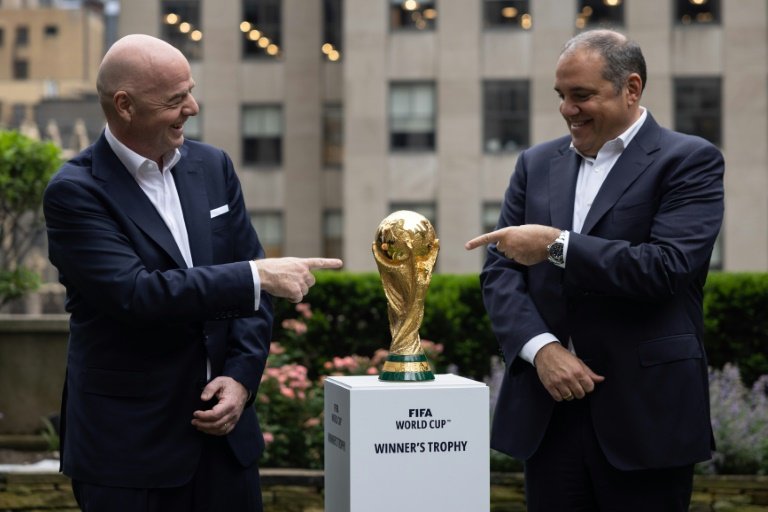 FIFA President Gianni Infantino (L) and CONCACAF President Victor Montagliani (R) would need to agree on any plan for North American nations to play in the Copa America. / © AFP

North America's trio of 2026 World Cup hosts are being urged to head south to play in the next Copa America in a bid to improve on disappointing results in Qatar.

The United States, Mexico and Canada will jointly host the next World Cup in less than four years and as co-hosts they will qualify automatically for the expanded 48-team tournament, leaving plenty of space in their schedule and a shortage of competitive games with no qualifying cycle.

The United States were the only team from CONCACAF to make it out of the group stage and they lost their round of 16 match against the Netherlands 3-1.

Canada, playing in their first World Cup since 1986, lost all three of their matches in Qatar while Mexico ended a run of of seven straight World Cups where they reached the knockout stage, prompting a major inquest in the country. Central Americans Costa Rica, CONCACAF's other representative in Qatar, finished bottom of their group.

While the need for improvement is evident, finding games against top international opposition has become more difficult since the drastic reduction in European friendly match opportunities that has accompanied the creation of the UEFA Nations League.

CONCACAF will hold the finals of its own Nations League competition in June next year, followed by the biennial 16-team Gold Cup but in those competitions the toughest opponents the 2026 hosts will face is likely to be each other.

"In order for CONCACAF to compete at the highest of levels at the World Cup they have to find better competition. The UEFA Nations League killed the friendly circuit for the United States, Canada and Mexico. I'd love to see them compete in Copa America and having done so myself it's such a tougher spot to play than the Gold Cup," he said.

Mexico goalkeeper Guillermo Ochoa, who has featured in the last five World Cups, has made a similar call and also suggested his country might also want to feature in the Asian Cup. "We can't just play friendlies in the US," he said.

Such moves would require the agreement of CONCACAF, which governs North and Central America and the Caribbean and would also need to be signed off by FIFA. CONCACAF declined to comment.

The next Copa America is scheduled for 2024 although no venue has yet been set after Ecuador declined their turn to host.

Unlike the European Championships which is strictly for UEFA member nations, the Copa America has in the past involved nine different 'invited' countries from outside of CONMEBOL.

Mexico has taken part on nine occasions and the United States three times but Canada has yet to feature.

A more ambitious plan could be for a repeat of the special centenary edition of the tournament, held in the United States in 2016, which featured six CONCACAF teams alongside all ten CONMEBOL nations.

Such a scenario would offer the most lucrative commercial revenue possibilities and build momentum among fans and television audiences ahead of the World Cup.

That could be an option for the clear window in June and July of 2025, a year out from the World Cup, in the slot when in the past FIFA held the now discontinued Confederations Cup as a 'test event' in the World Cup host nation.

Adding to the uncertainty, but also potential opportunity, FIFA has yet to agree on a new international match calendar format to replace the current system which ends in 2024.

Although the leading football officials from North and South America are currently in Doha for the World Cup, it is understood that there have not been any formal discussions about Copa America participation or any other initiatives.

CONCACAF president, Canadian Victor Montagliani, also a FIFA vice-president, has a strong relationship with FIFA president Gianni Infantino making it unlikely that any cross-confederation agreement would face opposition from the global governing body.

While nothing has yet been decided, no option has been ruled out and with the calendar currently showing blank pages for 2024 and 2025, discussions are expected to intensify in the coming weeks.