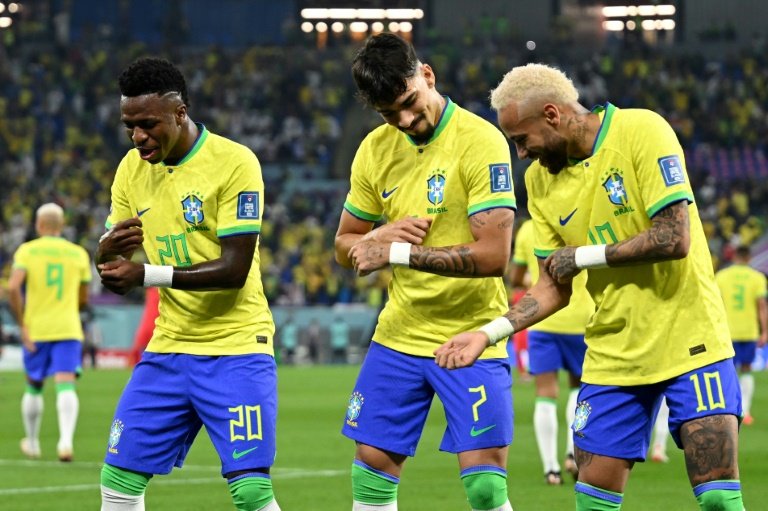 Brazil's players have divided opinion after they celebrated their goals in the 4-1 World Cup mauling of South Korea with some extravagant dance moves, with even their coach getting in on the act.

The pre-tournament favourites put on a fearsome display of attacking football on Monday to send South Korea home and set up a quarter-final in Qatar with 2018 runners-up Croatia.

Tite's side took the lead in just the seventh minute through Vinicius Junior and Neymar scored from the penalty spot on his return from an ankle injury as the Koreans were outclassed.

But it was the manner of the exuberant celebrations during the game that caught the eye of many, with the Brazilians rolling out a set of choreographed dance moves.

"Look, I've never seen so much dancing, it's like watching Strictly," said former Manchester United captain Roy Keane, referring to a popular TV show in Britain, in which celebrities compete in a dance contest.

"I don't like this, I think it's really disrespecting the opposition."

Even Tite did a jig with his players in front of his dugout after Richarlison scored a classy third for Brazil in the 29th minute.

The Tottenham forward said they had been practising their dance moves.

"This cheerful and happy atmosphere is important, the professor’s joy infects us on the field," he said of the coach.

"There are always spiteful people who will understand it as disrespect," he said. "I told the players to hide me a little, I know about the visibility.

"I didn't want it to have any other interpretation than the joy of the goal, the result, the performance, but not disrespect for the opponent or (South Korea coach) Paulo Bento, for whom I have a lot of respect."

Alexi Lalas, the former United States stalwart who played at the 1994 World Cup, said he was all for the colourful celebrations.

"I feel sorry for the life you live that has no joy.

But Graeme Souness, another famously no-nonsense pundit from Britain, was having none of it.

"It's only a matter of time before someone goes right through one of these Brazilians," said the notoriously tough-tackling former Liverpool and Scotland midfielder.