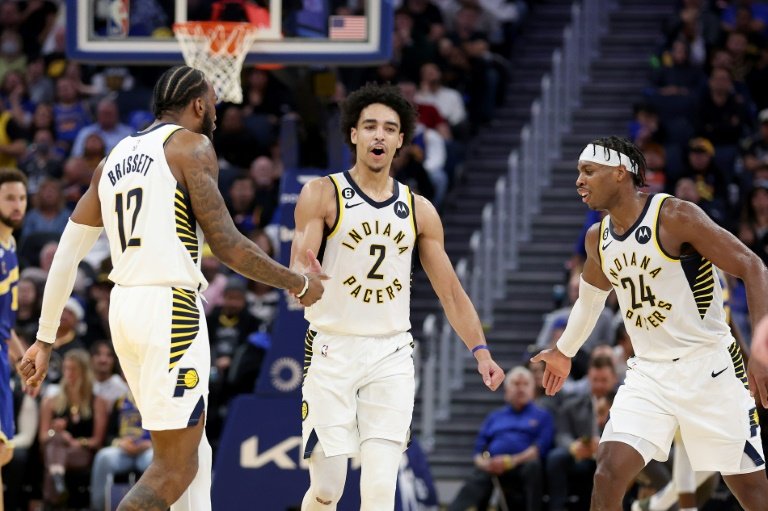 Jayson Tatum scored 17 of his 31 points in the third quarter on Monday as the Boston Celtics earned an impressive 116-110 NBA victory over the Raptors in Toronto.

Trailing 62-56 at halftime, the Celtics out-scored the Raptors 35-18 in the third period to take a nine-point lead, pushing their advantage to as many as 13 in the fourth as they handed the Raptors just their third home defeat.

The NBA champion Golden State Warriors also suffered a rare home defeat, falling 112-104 to the Indiana Pacers -- the Warriors' second loss this season at the Chase Center in San Francisco.

Klay Thompson's 28 points led the Warriors as star Stephen Curry endured a tough shooting night, connecting on three of 17 attempts on the way to 12 points.

"I just thought they came in, out-played us," Warriors coach Steve Kerr said. "Out-coached us."

In Toronto, the Celtics improved their league-best record to 20-5.

They lead the Eastern Conference by two games over the Milwaukee Bucks, who beat the Orlando Magic 109-102 on the back of 34 points and 13 rebounds from Giannis Antetokounmpo.

Tatum scored 17 of his 31 in the third quarter and Jaylen Brown added 22 points as Boston posted their seventh win in eight games -- despite the absence of injured Al Horford and ailing Malcolm Brogdon.

Defensive Player of the Year Marcus Smart added 18 points and Blake Griffin's 13 included a tip-in off a Tatum miss that pushed Boston's lead to 115-108 with 26.8 seconds remaining.

Tatum said the Celtics told themselves at halftime to "figure it out."

"Second night of a back-to-back, against a team that plays really well at home," he said. "We were just playing too slow. We were worried about the officiating too much, and we just wanted to change that."

Tatum said it's the kind of win the Celtics need if they're to return to the NBA Finals and claim the title that eluded them against Golden State last season.

"When we put our minds to it, we can beat anybody," he said.

In Orlando, the Bucks shook off a sluggish start on the way to a 54-45 halftime lead and never trailed after the interval, withstanding a late push that saw the Magic cut the deficit to four points with 2:20 remaining.

Philadelphia's James Harden returned from injury against his old team in Houston, but the struggling Rockets spoiled his night with a 132-123 double-overtime victory over the 76ers. 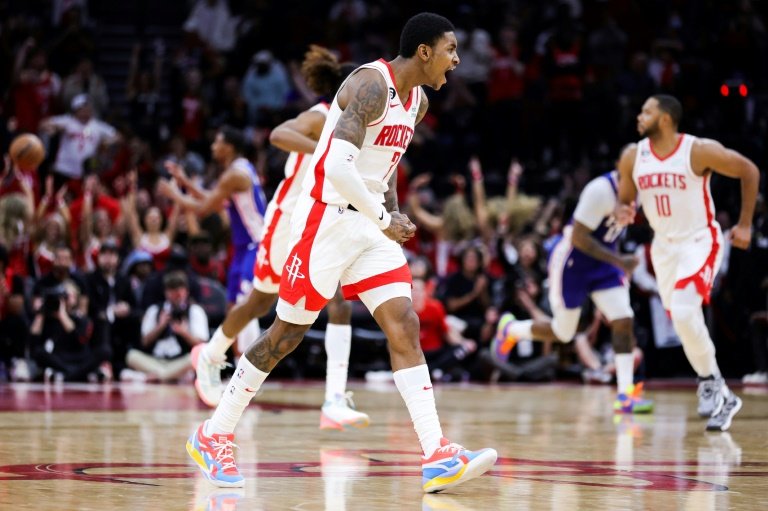 Houston's Kevin Porter Jr. reacts after making a basket in the second overtime of the Rockets' NBA victory over the Philadelphia 76ers / © GETTY IMAGES NORTH AMERICA/AFP

The Sixers had hoped Harden's return after missing 14 games with a foot injury would help them reverse their fortunes after two road defeats.

But he looked rusty in connecting on just four of 19 shots from the field on the way to 21 points, seven assists and seven turnovers.

Joel Embiid led the 76ers with a game-high 39 points. He grabbed seven rebounds with two blocked shots before fouling out in overtime.

Los Angeles Clippers stars Kawhi Leonard and Paul George returned from injury and made an immediate impact in a 119-117 victory over the Hornets in Charlotte.

George, who missed seven straight games with a hamstring strain, led the Clippers with 19 points and Leonard added 16 -- including a game-tying put-back basket and the game-winning step-back jump shot with 1.4 seconds remaining.

"It felt good," said Leonard, a two-time NBA champion who had missed the previous six games with a sprained right ankle. "My teammates trusted me."

In Dallas, the Mavericks seized control with a 33-15 first quarter and never let up in a 130-111 victory over the Western Conference-leading Phoenix Suns.

Deandre Ayton scored 20 points for Phoenix and Devin Booker, who had averaged 39 points over the Suns' previous four games, scored 11.