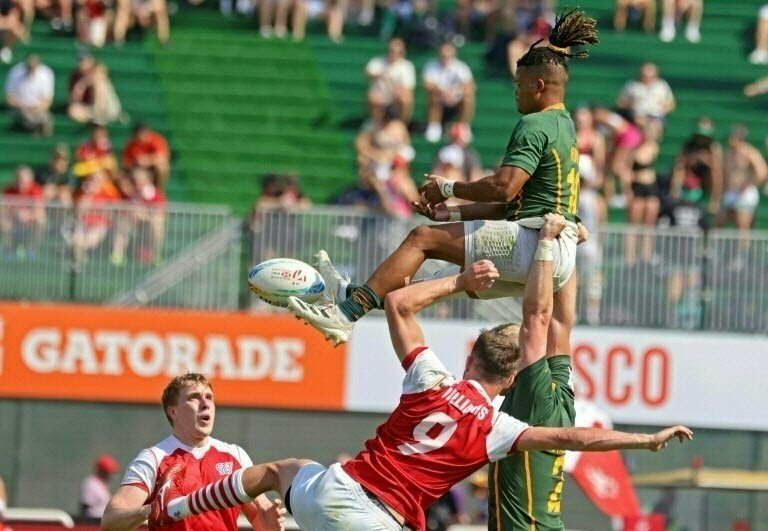 South Africa set up a Cup quarter-final with Samoa at the Dubai leg of the World Rugby Sevens Series although Olympic champions Fiji missed out on the elite draw of the competition.

With qualification for the Paris 2024 Olympic Games resting on this season's standings, stakes are high and so it showed on the opening day in the UAE.

South Africa are winners of five of the last six tournaments in Dubai, including twice last season when events were played on back-to-back weekends as organisers juggled with the post-pandemic travel issues.

The Blitzboks, however, stumbled to a 14-5 defeat by Great Britain in their opening game before rebounding to beat Kenya 27-17 to set up a must-win final pool match against Australia, which they duly did, 19-12.

The combined British side fell 28-19 to the Wallabies, who won the season's opening leg in Hong Kong and will now come up against the United States in the quarters.

"We had a serious discussion amongst ourselves after the loss (to Britain)," said South Africa coach Philip Snyman.

"The standard delivered was not the standard expected. We agreed there and then that it was not what this jersey was about. Credit to everyone who stepped up afterwards and gave us something to be proud of.

"Beating Australia, the number one team in the world, in the way we did, that was great. I think we restored the pride back into the jersey," said Snyman, who won three World Series titles as a player.

Although Fiji saw off Uruguay 52-0, they went on to lose 24-7 to New Zealand who topped their pool and were left needing to beat Argentina by 10 points to advance.

But the Fijians could only win 17-12, five points short, meaning Los Pumas and the Kiwis progressed, to play Ireland and unbeaten France in the Cup quarters respectively.

The United States also finished unbeaten on day one after seeing off Canada 19-14 and Japan 43-7, and then sealing a narrow 14-12 victory over Samoa.

The top four teams in each competition at the end of the World Series will be guaranteed a spot in the Paris 2024 line-up.