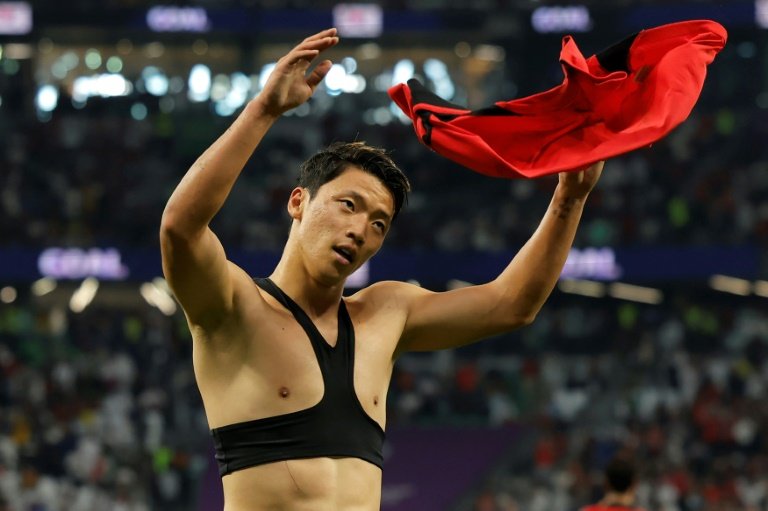 Hwang Hee-chan scored in injury time to rescue South Korea from the brink of World Cup elimination and propel them into the last 16 with a dramatic 2-1 win over already qualified Portugal on Friday.

The substitute forward slipped in the winner in the 91st minute at Education City Stadium in Qatar to spark delirium and tears among the Korean players and fans.

Skipper Son Heung-min, who set up the winner with a fine run and pass, collapsed to the turf at the final whistle with tears in his eyes having played a decisive part in Korea's fightback from 1-0 down.

The Korean players then stood in a huddle watching the Ghana versus Uruguay match on a mobile phone as they waited for their place in the last 16 to be confirmed.

When it was, they celebrated wildly before sprinting towards a group of Korean fans behind one goal and diving to the turf.

"As a Korean I am extremely proud and want to thank all the Korean fans in Korea," said 26-year-old Hwang, who plays for Premier League side Wolves.

"This is a present for them. More than anything I want to say I am very, very proud," added Hwang, who missed the first two games in Qatar because of injury.

A much-changed Portugal took a fifth-minute lead through Ricardo Horta but the Koreans, who had to win to stand any chance of staying alive, hit back in the 27th minute through defender Kim Young-gwon.

Portugal skipper Ronaldo played a part in the Korean equaliser, turning his back on a corner and the ball hitting him on the shoulder to set up Kim.

South Korea and their skipper Son, in a mask after recent surgery, needed to score again but they failed to really trouble Portugal until Son teed up Hwang in injury time after a searing run and threaded a pass through the legs of a Portuguese defender.

"Before the match Son said I would do something today -- 'we trust you'," said Hwang, who had come on in the 66th minute as Korea chased the goal they so badly needed.

"It was an excellent pass and made my job much easier," he added.

South Korea coach Paulo Bento, the former Portuguese international, had to watch from the stands after he was sent off following the final whistle of the Koreans' 3-2 defeat to Ghana.

Son, the Spurs forward, was yet to get going at this World Cup after surgery for a fracture around his left eye at the start of November.

Wearing a black mask, the 30-year-old showed glimpses of his brilliant best as South Korea chased the three points, his classy assist at the death in front of a 44,000 crowd coming when his country needed him most.

Portugal coach Fernando Santos had brought Ronaldo off on 65 minutes to rest him.

Ronaldo did not look overly pleased but Santos said that was because of "insults" from a Korean player.

"We lost our organisation and Korea controlled the game, we lost focus," said Santos.

"Our players were motivated but we were opened up on the counter-attack, that can happen.

"We are somewhat upset. We are first (in the group) but wanted to win to increase the morale of the players.

"This served as a warning to our team."