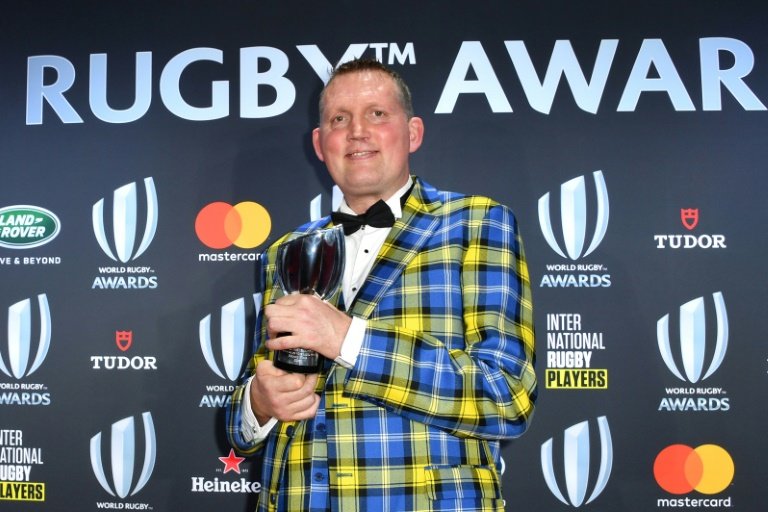 Former Scottish rugby international Doddie Weir has died at the age of 52. / © AFP

Former Scottish rugby international Doddie Weir has died at the age of 52 after a long battle with Motor Neurone Disease (MND), his family announced on Saturday.

Weir, who won 61 caps for his country and was selected for the British and Irish Lions Tour to South Africa in 1997, was diagnosed with MND in 2016.

He went on to set up the "My Name'5 Doddie" foundation, which has raised £8 million ($9.7 million) to fight the disease.

"It is with great sadness that we announce the death of our beloved husband and father, Doddie," said a statement from his wife Kathy Weir, published on the Scottish Rugby Union (SRU) website.

"Doddie was an inspirational force of nature. His unending energy and drive, and his strength of character powered him through his rugby and business careers and, we believe, enabled him to fight the effects of MND for so many years."

Surrounded by his family, Weir took the field at Murrayfield just two weeks ago before Scotland's Autumn International against New Zealand to present the match ball.

Scotland captain Jamie Ritchie described that moment as one of his most meaningful in his rugby career.

"I do not have the words to describe how inspirational he is to us," Ritchie tweeted.

"MND took so much from Doddie, but never his spirit and determination. He battled MND so bravely, and whilst his own battle may be over, his fight continues through his foundation, until a cure is found for all those with this devastating disease," added the family's statement.

John Jeffrey, the chairman of Scottish Rugby and former teammate of Weir paid tribute to both the player and the man.

"Doddie was ahead of his time as a ball playing second row and for almost a decade he was one of the first names on the Scotland team sheet. He was a great team mate on the pitch and an even greater team mate off the pitch," said Jeffrey in a SRU statement.

"For all that Doddie achieved as a rugby player, his name is associated worldwide with the battle to find a cure for MND.

"For the last six years, Doddie and Kathy have dedicated themselves to not only finding a cure for MND but also caring for fellow sufferers. He raised literally millions for his foundation but, more importantly, raised awareness globally as he courageously battled this cruel disease, and always with a smile on his face."

There was a minute's applause in honour of Weir when news of his death was announced at half-time of England's Autumn international defeat to South Africa at Twickenham.

Tributes from beyond the sporting world poured in for a player famed for his charisma and outlandish dress sense.

Scotland's First Minister Nicola Sturgeon tweeted: "This is so terribly sad. Doddie was one of our nation's sporting legends, but the brave way he responded to MND surpassed anything ever achieved on the rugby pitch.

"He refused to let it dim his spirit and did so much to help others. My condolences to his loved ones."