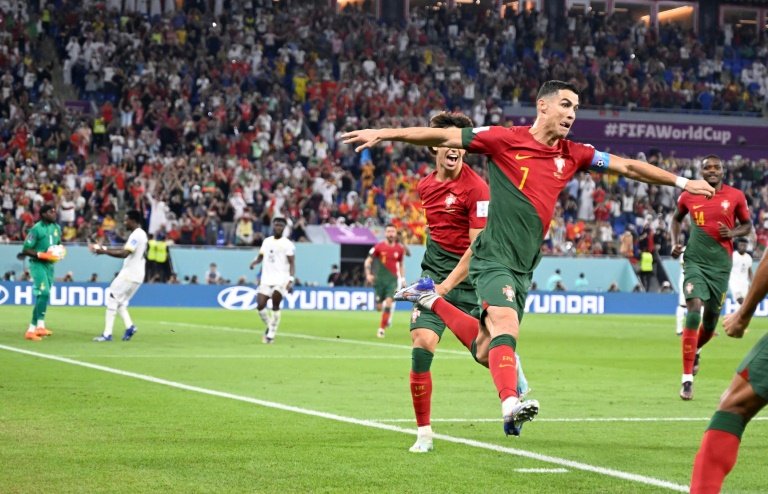 Manchester United can no longer count on Cristiano Ronaldo, after they parted ways by mutual consent this week, but the veteran striker showed that Portugal still can.

The 37-year-old striker won and converted a penalty to break the deadlock in what was ultimately a thrilling 3-2 win over Ghana on Thursday, becoming the first player to score at five World Cup finals.

As Ronaldo leapt into the air and fell back down to earth, tens of thousands of fans in Stadium 974 imitated his signature celebratory roar, his explosive interview far from their thoughts.

Ronaldo's team-mates lavished him with praise after the game, with Manchester City midfielder Bernardo Silva delighted to be able to rely on the striker's contributions.

"He's special because he's one of the best of all time, playing in his fifth World Cup, and he's still able to help us a lot," said Silva.

"He proved it again today and we are very happy we can still count on him. Not just the goal but he worked a lot for the team."

Ronaldo, whose first goal at a World Cup came back in 2006 against Iran, netted in each edition since and now again in Qatar after tumbling in the box under pressure from Mohammed Salisu.

It was a cheap penalty -- some would say a dive – but Ronaldo had been harshly denied a goal in the first half when he was penalised for a dubious foul.

Ronaldo's big moment arrived after a week of turmoil, caused by his explosive interview in which he blasted his club Manchester United and coach Erik ten Hag.

The Selecao talisman's 192nd international appearance was one of the most eagerly awaited.

Now unattached, this was his first chance to put himself in the proverbial shop window, although his glittering CV speaks for itself.

Ronaldo's strike was his 118th for Portugal, further extending his all-time record for men's international goals.

"I think 'Cris' likes to work under that criticism from everyone, so I pray you all keep doing that because it gets the best from him, when you (the media) do that," said Bruno Fernandes, his former club-mate and Portuguese compatriot.

Ahead of the warm-up Ronaldo gritted his teeth in the tunnel and geed himself up, in what might have been a private moment to restore his own focus -- but the cameras are always following him and alerted supporters to his imminent arrival.

Earring glinting under the floodlights, Ronaldo jogged out to a rapturous reception from Portugal's fans, whom he applauded back. Sideshow on hold, it was time to get down to business.

He was fired up and appeared emotional during Portugal's national anthem, but he and his country started slowly.

Ronaldo was gifted the first big chance of the game when Otavio slipped him through, but his control was too heavy and Ghana goalkeeper Lawrence Ati Zigi was out quickly to deny him.

Two minutes later he had another opportunity, beating Salisu in the air but nodding wide from close range.

The striker thought for a split-second he had made history after half-an-hour, lashing home masterfully, but the goal was disallowed and he would have to wait.

Ronaldo had tangled with Alexander Djiku to earn space in the box, illegally in the eyes of referee Ismail Elfath. The veteran flung up an arm in frustration.

But the next time he threw his arms in the air, it was to celebrate, after drilling his penalty into the top corner.

Injured and trying to direct affairs from the sidelines at the denouement of their Euro 2016 triumph, Portugal's greatest ever player is aiming to earn this trophy while on the pitch.

Some question whether he should still be starting, given his country's depth of young attacking talent, but unlike Ten Hag, coach Fernando Santos cannot ignore the still-hungry Ronaldo, nor can the fans, nor his team-mates.