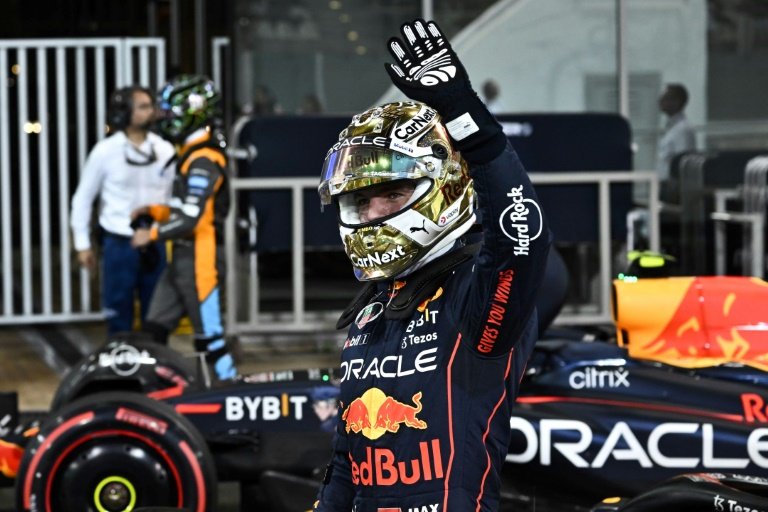 The two-time world champion clocked a best lap in one minute and 23.824 seconds to finish two-tenths clear of the Mexican, delighting Red Bull after a week of reported rifts between the two drivers.

Charles Leclerc was third ahead of Ferrari team-mate Carlos Sainz and the two Mercedes of Lewis Hamilton and George Russell, who claimed his maiden victory last weekend in Brazil.

Verstappen’s success brought him his third consecutive pole at the Yas Marina Circuit, his seventh of the season and 20th of his career ahead of a race in which he bids for a record-extending 15th win in a single season.

"Great job everybody, good team effort," said Verstappen on his slow down lap. "Well done everybody," added Perez, the two offering low-key enthusiasm after a stormy week since their ‘team orders’ row.

Lando Norris was seventh for McLaren ahead of Alpine’s Esteban Ocon and retirement-bound four-time champion Sebastian Vettel of Aston Martin. Daniel Ricciardo was 10th on his last drive for McLaren.

Under the dazzling floodlights, Vettel’s father Norbert was conspicuous in his green Aston Martin shirt as he cheered his son from the garage for his final qualifying session.

A full five minutes passed before the 'big guns' emerged, Mercedes delaying their entry to exploit a cooling track on a very warm evening with an air temperature of 30 degrees Celsius and the track at 34.

Much as expected, following their speed in final practice, the Red Bulls of Verstappen and Perez set the pace ahead of the Ferraris on their first runs before a frantic final flurry in Q1.

That left Kevin Magnussen as the fastest of the rest, eliminated in 15th place just a week after claiming his and Haas’s maiden pole in the rain at Interlagos.

Out with him went Pierre Gasly in his last weekend with Alpha Tauri before joining Alpine, Alfa Romeo’s Valtteri Bottas and the Williams pair of Alex Albon and Nicholas Latifi.

The Q2 section began with Perez outpacing Verstappen by four-tenths.

Hamilton had briefly appeared endangered, but responded to go second, splitting the Red Bulls, with Russell taking fourth. "Three-tenths?" he repeated when told of his gap behind the motivated Mexican.

Vettel, irritated by slower rivals including Ferrari, drove aggressively to rise to ninth and then fifth, an emotion-fuelled effort.

On the first runs in Q3, Sainz set the pace before Verstappen delivered a rasping lap in 1:23.988 to pull three-tenths clear of the Ferrari, stamping his authority on proceedings before the final runs.