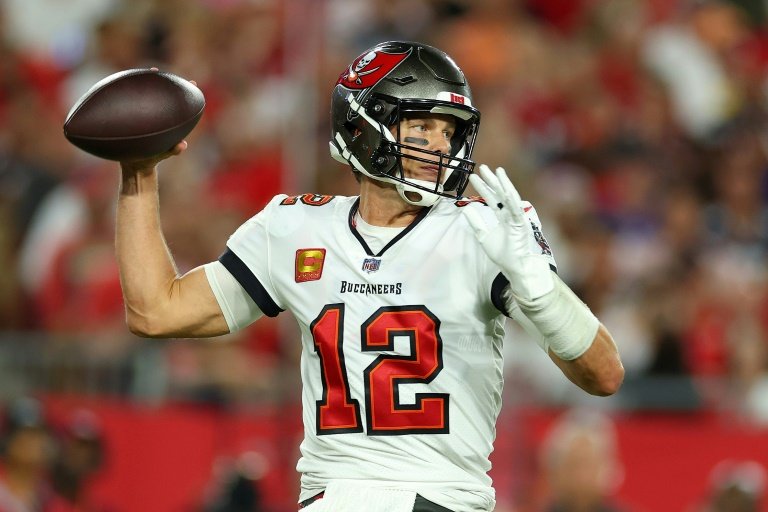 Tom Brady believes "a lot of bad football" is behind an uneven start to the NFL season that has left just eight of 32 teams with winning records heading into week five of the campaign.

Brady's Buccaneers are one of 15 teams with a 2-2 record after four games, which includes Tampa Bay's opponents on Sunday, the Atlanta Falcons.

While the parity is no doubt partly down to NFL rules designed to ensure competitive balance year-after-year, seven-time Super Bowl champion Brady says it is more easily explained by a drop-off in quality.

"I think there's a lot of bad football from what I watch," Brady said.

"I've watched a lot of bad football, poor quality of football. That's what I see," the veteran quarterback added.

Brady counts his own Buccaneers amongst the teams who have failed to perform this season.

The 2020 season Super Bowl champions started their campaign with scratchy road wins over the Dallas Cowboys and New Orleans Saints, but have since been beaten twice at home, first by Green Bay before Kansas City romped to a 41-31 victory in Florida last weekend.

"0-2 at home sucks," Brady said. "That's the reality. There's no excuses. We haven't got the job done. "It's a production business –- you either win or you lose."

Brady meanwhile heads into Sunday's game against a backdrop of tabloid gossip about the state of his marriage to Brazilian supermodel Gisele Bundchen. According to one report this week, the couple have both recently hired divorce lawyers.

Brady was not asked directly about the reports during a press conference on Thursday, but acknowledged that maintaining his singular focus on the sport in what is his 22nd season had been "challenging".

"I think, you know, football has its challenges in different ways for everybody at different times," Brady said. "So, it's work. Everyone has different challenges and you deal with it the best way you can."

With so many teams struggling for form, this weekend's fixture list will feature only one clash between two teams with winning records, when the Green Bay Packers (3-1) face the New York Giants (3-1) in London.

Packers head coach Matt LaFleur has made no secret of the fact that he is no fan of the overseas fixtures.

"I'm not going to give you my honest answer. I'd rather refrain," LaFleur said when asked for his views on the fixture.

"It feels like a Thursday night game for us as coaches just in terms of all the preparation you've got to do. But you just do it, so it is what it is."

"Listen, coaches are creatures of habit, even more than players. Anytime there's a minute adjustment to the schedule, it throws them all out of whack," Rodgers said in reaction to LaFleur's remarks.

Had it been up to Rodgers, Green Bay would have traveled earlier to London instead of flying into the British capital on Friday.

"We're all excited," Rodgers said. "I think the reason I said I wanted to go over early was just to experience a little bit of that culture, to be able to get out and see some sights and interact with fans, go to a pub and have a Guinness or whatever the local brew is.

"That's what we all want to do, those of us that want to go over early."

While so many teams are mired in mediocrity, the Philadelphia Eagles will look to extend their unbeaten 4-0 start to the season on the road against the Arizona Cardinals (2-2).

Eagles quarterback Jalen Hurts however is adamant the Cardinals defense has the ability to disrupt Philadelphia's in-form offense.

"They have speed on the backend. So, let's not set the precedent for that. This is a good football team."

Elsewhere on Sunday, Josh Allen and the Buffalo Bills aim to improve to 4-1 when they host the Pittsburgh Steelers, who have struggled to a 1-3 record in the opening weeks of the season.

Bills quarterback Allen says there is no chance of the Steelers being taken lightly.

"It's the Pittsburgh Steelers we're talking about," Allen said.

"They've been a very good team for a very long time and it's no secret why. The coaching staff that they've got in place there and continuing to develop those players.

"It's been not fun to watch on defense knowing how many different things they can do and show you."