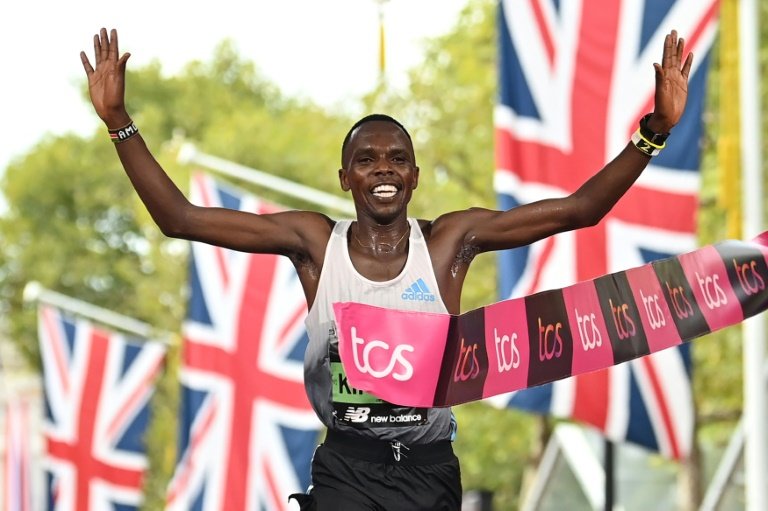 Kenyan Amos Kipruto marked his London Marathon debut with a decisive victory on Sunday as Ethiopian 23-year-old Yalemzerf Yehualaw became the youngest winner of the women's race despite falling in the closing miles.

It was a maiden London victory for Yehualaw in what was just the second marathon of her career.

The 30-year-old Kipruto, a world bronze medallist in Doha in 2019, crossed the line in London in two hours, four minutes and 39 seconds after breaking away late on.

An elated Kipruto said: "This is my London debut and it's a wonderful day.

"I decided to make a decisive break because of my training. I was confident and I knew when to go."

Bekele said he still hoped to break the marathon world record even though he's aged 40 and arguably no longer the force he was when winning three Olympic gold medals, 17 world titles over cross-country, track and road.

Kenyan Eliud Kipchoge smashed his own world record by half a minute in last week's Berlin Marathon in a time of 2:01:09.

But Bekele, a former longtime holder of both the 5,000 and 10,000 metre world records, was clear about his ambition when asked after Sunday's race if the marathon world record was still in his sights.

Yehualaw's winning time of 2:17:26 was just three seconds outside the mark she set at Hamburg in April when making the fastest debut in any women's marathon and the third fastest in the corresponding London race.

Yehualaw's victory was all the more impressive as she appeared to trip on a speed bump with six miles to go, before hitting the ground and banging her head as well as hurting her hip and knee.

Nevertheless, the women's 10 kilometre world-record holder recovered to rejoin the leading pack and then surged clear four miles from the finish, with Jepkosgei unable to reel her in. 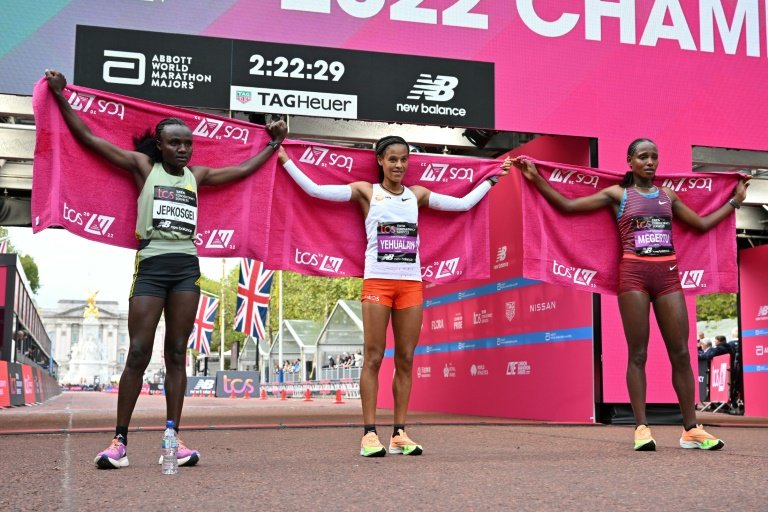 "I did not see the bump coming. I have some feeling in my hip and knee," she said.

"I had confidence I could run well. I am so happy to win on my first time in London. People were shouting a lot and it inspired me."

Several leading runners were ruled out of Sunday's race through injury, including British hope Mo Farah, while four-time winner Kipchoge opted against competing after his Berlin heroics.

"Kipchoge is an inspiration for us all and he is a legend for the young generation in Kenya," said Kipruto. "He is another level in sport and has been a mentor to me."

The women's race was without world record-holder Brigid Koskei, the 2021 and 2021 champion. The Kenyan withdrew because of a hamstring injury.

There was a Swiss double in the wheelchair competition on Sunday as Marcel Hug and Catherine Debrunner set new London course records in the men's and women's races respectively.

Hug retained his London crown in 1:24:38 after winning a sprint finish against Daniel Romanchuk of the United States.

Debrunner crossed the line first in a time of 1:38:24 after winning her maiden marathon in Berlin a week ago.

Next year's London race will return to its traditional date in April, thereby avoiding an effective clash with Berlin given the difficulty of competing in two marathons in such a short timeframe.

The London Marathon has been held in October for the last three years due to the Covid-19 pandemic.