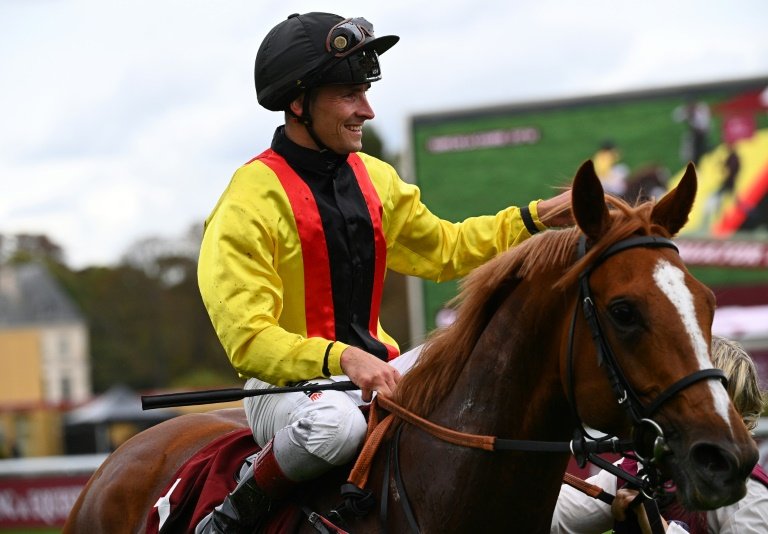 Around two thousand Japanese racing fans made their annual pilgrimage to Longchamp racecourse on Sunday hoping one of their four runners will finally crack the Prix de l'Arc de Triomphe at the 18th attempt.

Widely regarded as Europe's greatest race the quartet is a record entry for Japan in the Arc -- there are a maximum 20 runners in all -- which has seen them finish second on several occasions.

Titleholder and Japan Derby winner Do Deuce are their best hopes of making history with Deep Bond, who finished a tailed off last in 2021, and veteran Stay Foolish their other runners.

Their colours were posted up on four doors near the grandstands with good luck messages written on them by Japanese turfistes.

Stay Foolish's rider Christophe Lemaire has won multiple Japanese jockey titles since moving there in 2015 after a successful spell in France and he understands Japan's passion for the race.

"To win an Arc would be the Holy Grail knowing what it represents for the Japanese," he said.

How the expected 30,000 spectators react should Christophe Soumillon win on Vadeni may have French racing authority France Galop crossing their fingers it is not whistles and boos.

The 41-year-old Belgian ace is due to start a 60 day ban in a fortnight after elbowing rival Rossa Ryan at Saint Cloud on Friday resulting in him falling.

Neither France Galop nor David Redvers, a co-owner of a horse Soumillon rides later on Sunday, are happy he refused to stand down for the most high profile racing weekend in France.

Under French racing rules a ban comes into force a fortnight after the punishment is handed out.

Soumillon rides French Derby winner Vadeni for his employer the Aga Khan -- the jockey's two previous wins on Dalakhani (2003) and Zarkava (2008) were for him -- and his daughter Princess Zahra made plain on Saturday their dismay with his actions.

"Obviously it was an unconscionable and an unthinkable thing to happen and to do. It was very difficult to watch," she said.

"We talked about it (the incident) of course but it was too close to racing this weekend to do anything."

Frankie Dettori is another riding legend who has had his ups and downs this season but the exuberant Italian has a peach of a ride as he seeks a record-extending seventh Arc win on last year's winner Torquator Tasso.

Torquator Tasso, an 80-1 outsider last year, would become the ninth to win the race twice and the eighth to win it back to back.

"We pulled off a miracle from a wide draw and trip on Golden Horn back in 2015 -– I'll never forget that one!" the 51-year-old told his Sporting Index blog.

“He won't mind the hustle and bustle at all, he stays well, is streetwise and handles testing conditions if the rain comes.

"He's been second in a King George with some top-class horses in behind too, so there's no issues with his form this season.”

The likely favourite is Luxembourg -- he beat Vadeni and another French runner Onesto in the Irish Champion Stakes last month -- and would give trainer Aidan O'Brien his third winner in the race.

The people's favourite, though, or at least for the thousands of English racing fans who will be present will be tough as teak Alpinista.

She owes her popularity not just to her five successive Group One victories but also her trainer renowned raconteur 74-year-old Mark Prescott.

A trainer for 53 years -- he was the youngest to hold a licence when he began -- he says there is no doubt she is the best mare in the world.

"If Alpinista wins it will keep the fire flickering a little longer," he told the Guardian.