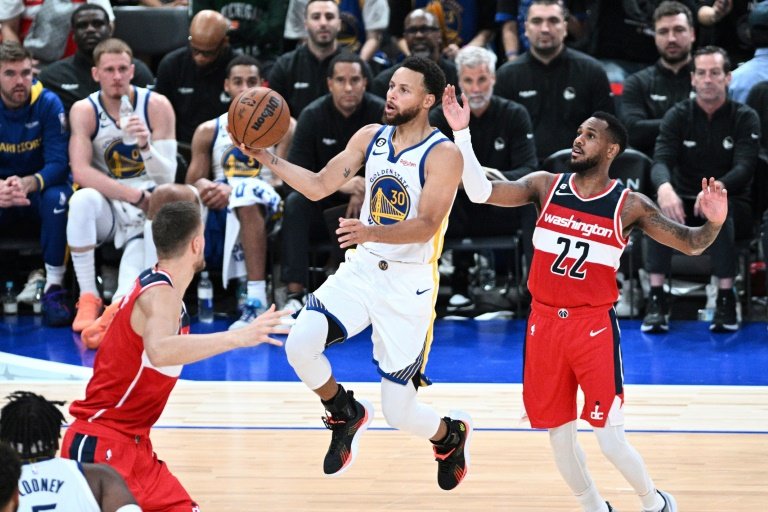 Stephen Curry said the Golden State Warriors had enjoyed a "productive" pre-season trip to Japan after the reigning NBA champions beat the Washington Wizards on Sunday for a second time.

Curry scored a team-high 17 points in almost 17 minutes on the court as the Warriors downed the Wizards 104-95 in front of a packed crowd in Saitama, north of Tokyo, in the second of two exhibition games between the teams.

The Warriors will attempt to win their fifth NBA title in nine years when the season begins later this month and Curry believes they will be ready for the opener.

"I think we made it productive and I think we got a little bit better as a team, got to know each other a little better," said the sharp-shooting Curry, last season's NBA Finals Most Valuable Player.

"I think the bigger thing is the next two weeks that we have back at home.

"We have three more pre-season games, a lot of good practice time, and that's going to be a big chance for us to fine-tune a lot of things to get ready for the start of the season."

The Wizards led 85-74 heading into the final quarter but the Warriors came roaring back thanks to a strong performance from rookie Patrick Baldwin Jr.

Curry and forward Draymond Green started for the Warriors but Klay Thompson again played no part, with head coach Steve Kerr leaving him out as a precaution against injury.

Curry said the trip to Japan had been an "amazing experience" off the court as well as on it, with the star player even "squaring up in the ring" against sumo wrestlers during a visit to a training session.

"I've been looking forward to this trip for a while now," he said.

"Love Japan, love Tokyo, love this whole area. It was an amazing four days. I wish it was a little longer."