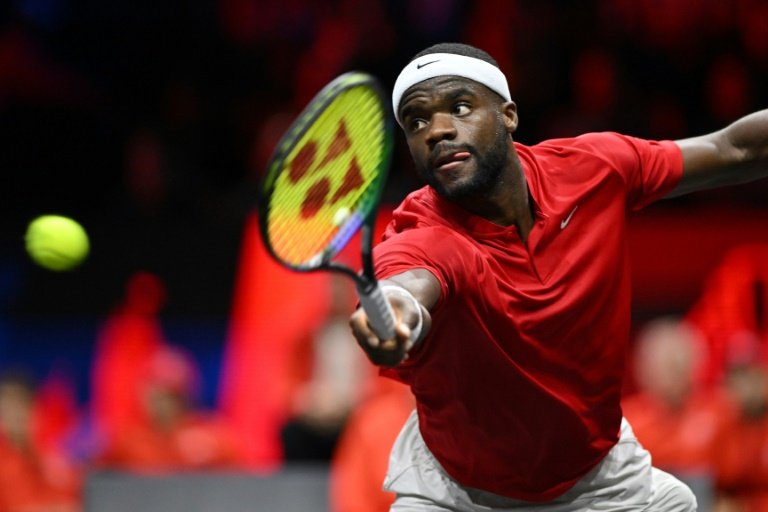 Frances Tiafoe on Sunday reflected on a "crazy month" that saw him reach a US Open semi-final and play a starring role at the Laver Cup -- but hopes that's just the start.

The world number 19 from the United States made a name for himself when he stunned Rafael Nadal on his way to a shock final-four appearance at Flushing Meadows last month.

He followed that up by leading Team World to their first Laver Cup title in London and even beat Roger Federer in doubles in the final match of the retiring tennis great's career.

Tiafoe, in Tokyo for the Japan Open, believes he has "a lot to give to the game".

"I'm super curious right now to see where I can take this tennis thing," said the 24-year-old.

"As far as the noise, obviously it comes with it. People will cheer me one day and the next you'll be forgotten -- you know how individual sports go."

Tiafoe arrived for practice on Sunday after watching the Washington Wizards play the Golden State Warriors in an NBA pre-season match being held north of Tokyo.

He said he left at half-time because he had to "lock in" for the Japan Open, where he is the number four seed and will play Japanese wild card Yasutaka Uchiyama in the first round on Monday.

Tiafoe arrived in Japan after he and doubles partner Jack Sock sent Federer into retirement with a defeat, after they beat the Swiss great and Rafael Nadal at the Laver Cup.

"To play Roger in his last match was bittersweet," said Tiafoe.

"Win or loss was irrelevant -- just to see him take his whole career in. So many different emotions, and so many people were there."

Tiafoe was introduced to tennis at an early age after his father, who moved to the US to escape civil war in Sierra Leone in the early 1990s, took a job as a live-in caretaker at a tennis training facility in Maryland.

Tiafoe said he hopes to inspire a new generation of Black tennis players.

"When I finish my career, if there's a lot of people who look like me playing tennis then I will feel like I definitely won," he said.

"That's definitely the goal, but also to bring different fans to the game by being me, showing them my personality and having fun."