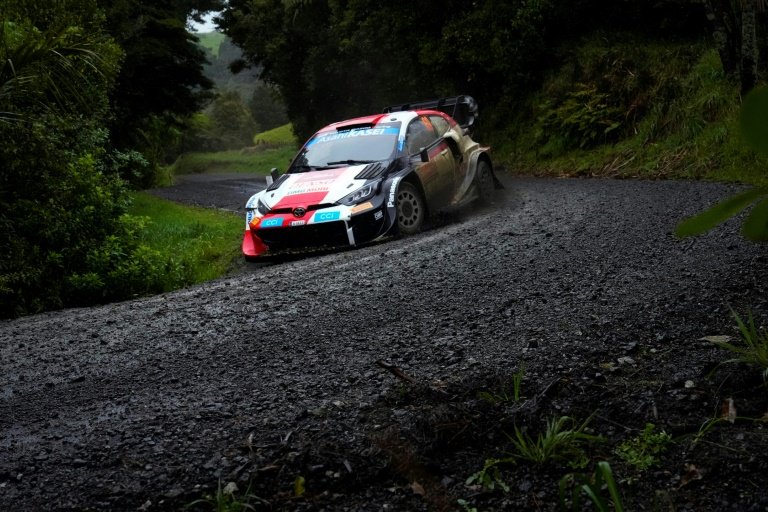 Finland's Kalle Rovanpera celebrated his birthday on Saturday by dominating the third day of Rally New Zealand, moving him to the brink of becoming the youngest-ever world champion.

The 22-year-old Toyota driver thrived in wet conditions north of Auckland and will take a 29-second lead over French eight-time world champion Sebastien Ogier into the final four stages on Sunday.

Championship pacesetter Rovanpera is guaranteed to claim his maiden world title with two rounds remaining in the 13-leg series if he finishes the rally seven points ahead of second-ranked Ott Tanak.

Rovanpera will become the youngest champion in WRC history on Sunday if he can clinch what would be his sixth rally win this season.

The lead has changed hands eight times this week but Rovanpera showed his class from the outset on Saturday, leaping from fourth overnight to first by winning three of the six stages.

He capitalised on a host of problems to beset his rivals, most notably a spectacular roll from Gus Greensmith on the 10th stage which forced the Ford driver to retire.

Greensmith's fellow Brit Elfyn Evans was forced out on the previous stage when he drove into an embankment.

As the rain intensified, Rovanpera eased off on the day's short final stage but he was still the second-fastest behind Irishman Craig Breen.

"It's been a really tricky day but quite enjoyable. Of course always, when are doing good times, you are enjoying it," said Rovanpera.

"The weather was a big challenge but I saw that as an opportunity and we took it quite well."

Tanak, who led after the second day, bemoaned technical problems when his engine became waterlogged on two different stages but he had not given up on his slim title chances.

"It's been quite a bad day but we are still here, third place, so it's not all so bad," he said.

Toyota team principal Jari-Matti Latvala said Rovanpera had the temperament needed to wrap up the championship on Sunday.

"He's very calm now. The only point I saw him a little bit nervous was before the rally started. But once we started, no more nerves after that," Latvala said.