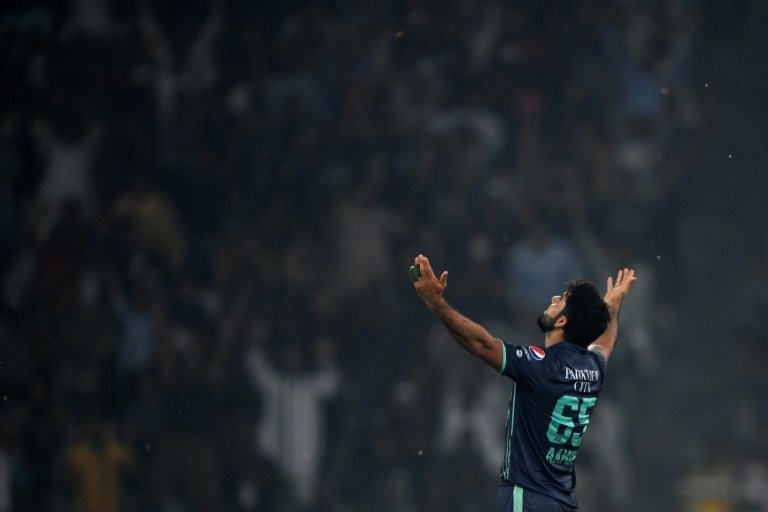 Prolific opener Mohammad Rizwan hit a fighting half-century before debutant all-rounder Aamer Jamal starred with the ball as Pakistan beat England by six runs in another last-over finish in the fifth T20 international in Lahore on Wednesday.

Rizwan's 46-ball 63 was the cornerstone of Pakistan's 145 all out in 19 overs after express pacer Mark Wood grabbed 3-20 to derail the home team who were asked to bat first at Gaddafi Stadium.

England's stand-in skipper Moeen Ali smashed a brilliant undefeated 37-ball 51, with four sixes and two fours, but failed to score the 15 needed off the final over as England managed 139-7.

Jamal kept his cool despite being hit for a six off the third ball, conceding just eight to give Pakistan a 3-2 lead in the seven-match series.

England won the first and third matches while Pakistan took the second and fourth, all played in Karachi.

Pakistan needed wickets to defend a below-par total and all six bowlers responded with at least a wicket each, with Haris Rauf grabbing 2-41.

Openers Alex Hales (one) and Phil Salt (three) were gone by the fourth over before the dismissals of Ben Duckett (10) and Harry Brook (four) left England struggling at 54-4.

Dawid Malan stopped the slide with a patient 35-ball 36, studded with six boundaries, before Ali raised his team's hopes of victory.

"I will give credit to the bowlers who defended a not-so-big total," said Pakistan skipper Babar Azam.

"I think Jamal showed great character by bowling the last over and his confidence got him over the line."

Ali, meanwhile, said England should have chased down the target.

"Disappointed we didn't chase those runs, we're a better team than that but we got strangled by the spinners in the middle overs," said Ali, whose team had fallen three runs short in pursuit of 166 on Sunday.

Earlier, Pakistan struggled against the pace of Wood.

Wood -- playing only his second international since an elbow injury in March followed by surgery -- was ably assisted by Sam Curran (2-23) and David Willey (2-23) as Pakistan were dismissed in 19 overs.

Amid a middle-order collapse from 42-1, which saw Pakistan lose six wickets off 48 balls for just 58 runs, Rizwan held on with a defiant knock, his fourth fifty in five matches in this series.

Wood dismissed Azam in the third over for nine before David Willey removed Shan Masood and Iftikhar Ahmed to derail Pakistan.

Rizwan completed his 20th T20I half-century before hitting Curran straight into the hands of Adil Rashid at deep square-leg in the 18th over. Rizwan struck three sixes and two fours.

The remaining matches are on Friday and Sunday, also in Lahore.