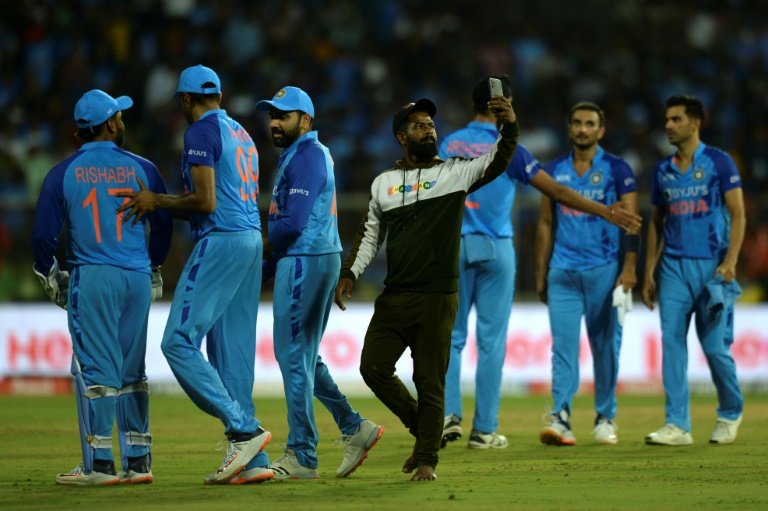 Fast bowlers Arshdeep Singh and Deepak Chahar wreaked havoc with the new ball to set up a convincing eight-wicket win for India in the first Twenty20 international against South Africa on Wednesday.

South Africa recovered from 9-5 in 2.3 overs to post 106-8 after India elected to field first on a seaming pitch at the start of the three-match series in Thiruvananthapuram.

India lost skipper Rohit Sharma for a duck and the star batsman Virat Kohli for three before the hosts achieved their target with 20 balls to spare and take a 1-0 lead.

KL Rahul (51) and Suryakumar Yadav (50) put on an unbeaten 93-run partnership to complete the chase as India move into their final two matches ahead of the T20 World Cup starting next month in Australia.

It was the bowlers who set up victory with Chahar taking two and Arshdeep returning figures of 3-32 to kickstart India's dominance despite losing pace spearhead Jasprit Bumrah to "back pain" before the start of the match.

Number eight Keshav Maharaj hit 41 off 35 balls to help South Africa bat the full 20 overs and add some respectability to their meagre total.

Chahar bowled skipper Temba Bavuma for a fourth-ball duck and fellow opener Quinton de Kock dragged a delivery on to his stumps from left-arm quick Arshdeep.

The Proteas slipped further into trouble when Arshdeep had Rilee Rossouw caught behind for nought and then bowled David Miller the next ball.

It was South Africa's worst-ever start to a T20 international when Tristan Stubbs fell to Chahar in the third over.

Markram smashed three fours and one six before being trapped lbw by Harshal Patel as India successfully reviewed the on-field umpire's initial decision.

Parnell fell in the 16th over but Maharaj stood firm before his knock ended in the final over as Patel picked up his second wicket.

In reply, India struggled to 17-1 in the first six overs with Kagiso Rabada sending back Rohit and then the hosts lost Kohli, caught behind off fast bowler Anrich Nortje.

Suryakumar eased the nerves with two sixes including a lucky one with an edge that sailed over deep third man to bring the crowd alive.

The in-form Suryakumar, who hit five fours and three sixes in his 33-ball knock took on the bowlers with Rahul, who stood anchor to hit the winning six, for company as the two went about the chase with clinical precision.