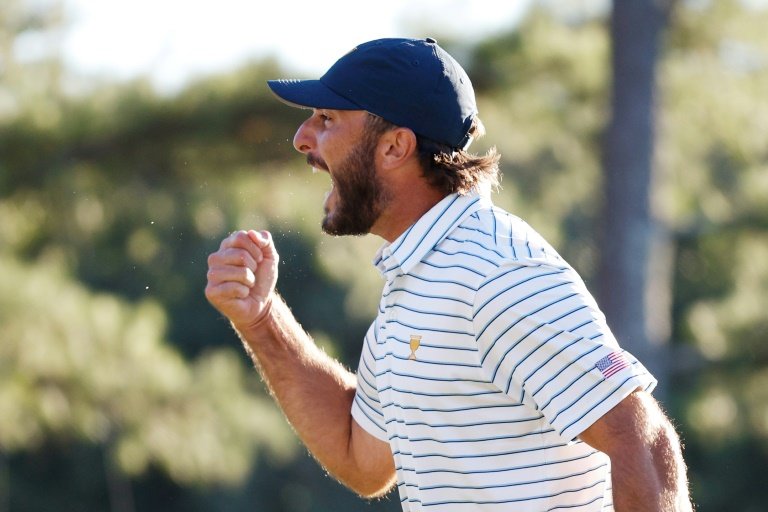 Max Homa sank a dramatic 11-foot birdie putt at the 18th hole Friday to deliver an emotional victory that gave the United States a record-tying 8-2 lead at the Presidents Cup.

The Americans won three four-ball (best-ball) matches over the Internationals and tied two more at Quail Hollow to equal the 2017 team for the largest US edge after two sessions in Presidents Cup history.

Two US duos, Patrick Cantlay and Xander Schauffele plus Justin Thomas and Jordan Spieth, won for the second time in as many days, but it was Homa that provided the heroics.

Homa, who won his first PGA title at Quail Hollow in 2019, joined Billy Horschel in a 1-up victory over Canadians Corey Conners and Taylor Pendrith in the day's final match.

Conners made birdie putts of six feet at the 11th and 22 feet at the 13th to lift the Canadians level, but Homa sank a 13-foot birdie putt to win the 17th and put the US 1-up.

At the 18th, Pendrith, who missed a 10-foot par putt at 18 to lose Thursday, sank a 13-foot birdie putt to give the Internationals a chance for half a point.

But Homa followed moments later with his intense birdie putt to tie the hole and win the match, pumping his fist as the putt fell and bumping chests with teammates to celebrate.

"This is insane," Homa said. "It has come down to the 18th for me two days in a row. To have the opportunity to do it was amazing.

"It's something I'll never forget."

Former US Presidents Bill Clinton and George W. Bush were among 40,000 spectators cheering on the hosts.

The Americans, seeking a ninth consecutive victory, lead the all-time rivalry 11-1-1 and have never lost on home soil.

This year's US team boasts 10 of the world's 16 top-ranked players while the Internationals were decimated by several top players jumping from the PGA to LIV Golf to become ineligible.

The Internationals have pushed eight of 10 matches into the last two holes but still have been unable to deny an overwhelming US squad.

"Jordan is starting to feel it with his putter and it's quite a sight to see," Thomas said.

Davis birdied 16 but Spieth sank a 20-foot birdie putt at the 17th to seal victory.

"It wasn't exactly what I was trying to do but it was the right line," Spieth said. "Once I got my speed control, I got it rolling."

The US duo led 5-up after eight holes but Kim, who ripped two pairs of pants warming up but quickly got a third, won 14 and 15 with birdies but Schauffele parred 16 for the triumph.

"You have to stay in the moment and not get ahead of yourself," Cantlay said. "We played really well and got out to an early lead. You tell yourself, 'Keep hitting quality shots and it'll work out.'"

The Americans, who were 2-up after 14 holes Thursday but lost, were 2-up with six to play Friday.

But Munoz won the 13th with an 11-foot birdie putt and Im birdied the next three holes to match the US duo and Munoz sank a par putt from just outside five feet to win 17 and tie the match.

Scheffler had a chance to win at 18 but his nine-foot birdie putt hung on the lip.

In a match where neither team was more than 1-up, Americans Cameron Young and Kevin Kisner tied Chile's Mito Pereira and South African Christiaan Bezuidenhout.