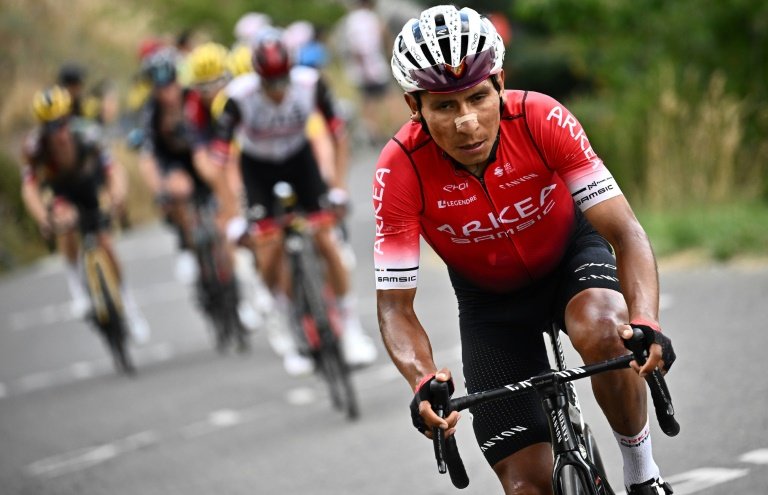 Colombian Nairo Quintana on Wednesday denied taking a banned pain medication after he was retrospectively disqualified from this year's Tour de France over a positive tramadol test result.

The pain medication has been on a list of International Cycling Union (UCI) prohibited substances since 2019.

"I know nothing about the use of this substance and deny ever having used it in my career," Quintana, who is due to take part in the Vuelta a Espana beginning on Friday in the Netherlands, said in a statement published to Twitter.

"With my team of lawyers we are exhausting all avenues to mount my defence."

Tramadol is only banned in competition and while Quintana has been disqualified from the Tour after testing positive for the substance on both July 8 and 13, he will not be banned from future races.

The UCI said Quintana "has been sanctioned for an infringement of the in-competition ban on using tramadol... with the aim of protecting the safety and health of riders in light of the side-effects of this substance".

The governing body added that "the analyses of two dried blood samples... revealed the presence of tramadol and its two main metabolites".

Quintana has 10 days to appeal the decision to the Court of Arbitration for Sport (CAS), the UCI said.

"As this is a first offence, Nairo Alexander Quintana Rojas is not declared ineligible and can therefore participate in competitions," it added.

Quintana's Arkea-Samsic team said they were aware of the decision but would "make no further comment".

The team did not say whether Quintana would still take part in the Vuelta but the Grand Tour's race director, Javier Guillen told Spanish news agency EFE that he "can start the race, according to the rules".

"The rider and the team will decide what they are going to do," added Guillen.

On Tuesday, the Breton outfit announced Quintana had signed a contract extension until 2025.

Quintana was the first Colombian to win a Grand Tour when he claimed Giro d'Italia glory in 2014 before adding a Vuelta triumph two years later.

Although he never won the Tour, he was an inspiration to many more Colombian cyclists that came after him, such as Egan Bernal who in 2019 became his country's first winner of the world's most prestigious race.