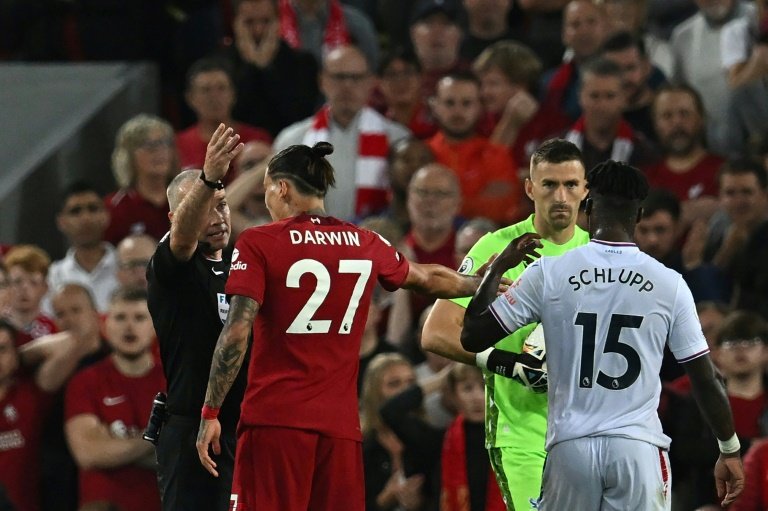 Virgil van Dijk said new Liverpool forward Darwin Nunez must learn to "control himself" after being sent off for a reckless headbutt during Monday's 1-1 draw against Crystal Palace.

The 23-year-old Uruguayan, who signed from Benfica in June, was shown a straight red card in the 57th minute at Anfield for his foul on Joachim Andersen and faces a three-match ban.

Colombia's Luis Diaz scored a brilliant equaliser after Liverpool were reduced to 10 men to cancel out Wilfried Zaha's first-half opener.

But the draw meant more dropped points for Jurgen Klopp's team, who have just two points after their first two matches of the Premier League season.

Klopp is already short of attacking options -- Diogo Jota and Roberto Firmino were absent from the squad for the Palace game and Nunez will now miss games against Manchester United, Bournemouth and Newcastle.

Van Dijk said Nunez had the support of his teammates but must learn to stay calm.

"He's got the backing from us and he knows it should not happen again and hopefully it will be that way," said the defender.

"He has to control himself, definitely. I think that's a separate thing. He has to manage himself, he has to be knowing that these things can happen, especially in the Premier League.

"It will be a learning curve for him and hopefully it will never happen again."

Andersen was booked following the clash that led to Nunez's dismissal and some Liverpool fans felt he had deliberately provoked the striker.

The Palace defender revealed on Tuesday that he had received death threats and social media abuse since the incident.

He is reported to have asked Palace's police liaison officer and the Premier League to investigate.

"Got maybe 300-400 of these messages last night," the Dane posted to his Instagram story. "I understand you support a team but have some respect and stop acting tough online.

"Hope Instagram and the Premier League do something about this."

Liverpool, who have been involved in a series of tight Premier League tussles with Manchester City in recent years, are already four points behind the defending champions and leaders.

But Dutch international Van Dijk said it was too early to make firm predictions.

"We've played two games so far this season and there's still a long way to go so anything can happen," he said.

"That's been shown over the last years so we'll focus on ourselves.

"We don't read what the others from the outside say about us because nobody knows what's really going on."