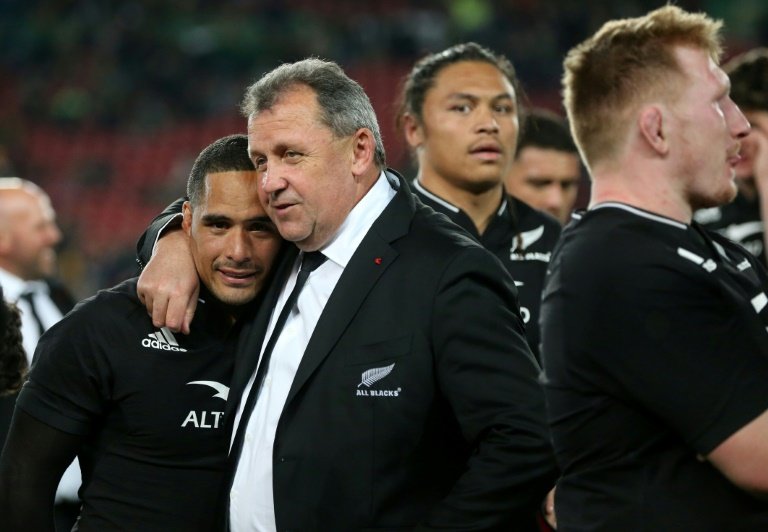 Ian Foster says that he expects to stay on as All Blacks coach after receiving the backing of his players, with his fate to be decided in the coming days.

An impressive 35-23 win over world champions South Africa in Johannesburg on Saturday relieved some of the pressure on Foster as New Zealand bounced back from three straight defeats.

But New Zealand Rugby CEO Mark Robinson subsequently refused to back Foster publicly, fuelling speculation that he could be replaced by successful Crusaders coach Scott Robertson.

An announcement is expected by New Zealand Rugby later this week.

The All Blacks are next in action against Argentina in Christchurch on August 27.

"I haven't heard or read those comments, but he's got a job to do," Foster told reporters in Johannesburg when asked about Robinson's remarks.

"I'll be given feedback, no doubt, but my expectations are that I'm the All Blacks head coach and later in the week I'll be going to Christchurch and assembling the team until I'm told different."

Pundits called for the 57-year-old Foster to be sacked after the All Blacks twice lost at home to Ireland last month and were beaten by South Africa, before winning Saturday's second Test against the Springboks.

Foster said that while it's unclear whether he has the support of New Zealand Rugby bosses, the team is behind him.

"I certainly feel that I have the support and backing of the All Blacks," he said.

"To coach this team, you have to have categoric support."

"This performance was for all of us, but for me, that's my coach, I back him 100 percent," Savea said.

"He has been under a lot of pressure."

"I know 'Foz' (Foster) doesn't want to make it about himself, but I just want everyone to know that all the players have got his back."

"It's hard when you know what's going on in camp. You know it's a happy camp that's working hard and you sometimes feel (the criticism) is unwarranted," said Cane.

"We fully expect to carry on with Foz as head coach at this stage."