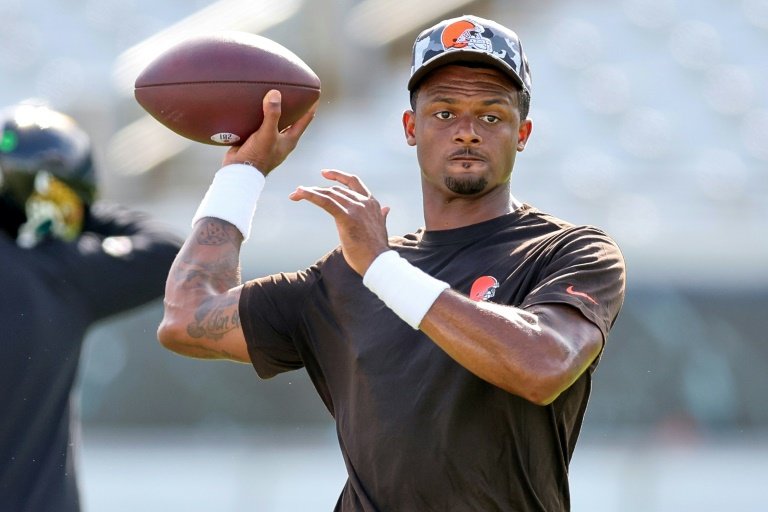 Cleveland Browns quarterback Deshaun Watson warms up prior to an NFL pre-season game against the Jaguars in Jacksonville, Florida / © GETTY IMAGES NORTH AMERICA/AFP

"I want to say that I'm truly sorry to all of the women that I have impacted in this situation," Watson said in an interview on the Browns' pre-game show broadcast on Cleveland News 5.

In two interviews since he joined the Browns from the Houston Texans in March, Watson had insisted he had "no regrets" regarding his actions.

Watson has been accused of sexual assault and inappropriate conduct during massage sessions in civil lawsuits filed by 25 women.

"The decisions that I made in my life that put me in this position I would definitely like to have back," Watson said on the Browns' pre-game show.

"But I want to continue to move forward and grow and learn and show that I am a true person of character and I am going to keep pushing forward."

The incidents took place between March 2020 and March 2021 while he was with the Texans.

None resulted in criminal charges and Watson denied wrongdoing.

On the basis of five incidents, Watson was this month suspended for six games for violating the league's personal conduct policy, with the ban set to begin at the start of the regular season in September.

That ruling was handed down by NFL disciplinary officer Sue Robinson and has been appealed by the league, whose officials want a harsher punishment.

The appeal is being heard by former New Jersey attorney general Peter Harvey, who was appointed by NFL commissioner Roger Goodell.

In the meantime, Watson is free to play in pre-season exhibition games, and started for Cleveland on Friday against the Jacksonville Jaguars.

In her ruling, which followed a hearing in June, Robinson said Watson violated the personal conduct policy with "egregious" and "predatory" behavior. She also noted his lack of remorse.

But she said that in selecting the length of the ban, she considered "the record when compared to the relevant precedent."

Watson has settled at least 20 of the lawsuits against him. The Texans separately reached settlements with 30 women who were prepared to make claims against the club for its alleged role in enabling his behavior.

The Browns said they conducted an "extensive investigation" before signing Watson to an NFL record five-year guaranteed deal worth $230 million. Fully guaranteed contracts are almost unheard of in the NFL.

Watson, who led the NFL in 2020 with 4,823 passing yards, missed all of the 2021 season under the "non-injury/personal matter" category of the league's collective bargaining agreement.

He said before Friday's game he was "super excited" at the prospect of playing.

"Each and every snap, I want to make sure I cherish that, because I'm not sure when the next time I'll be able to get out there with those guys," he said.

However long his suspension ends up being, he said, he plans to use it to improve himself.

"I know I have a lot of work to put in, especially on the field to be able to make sure I'm ready to play whenever that time comes whenever I can step back on the field," he said.

"But also, the biggest thing is I want to continue counseling and I want to make sure that I'm growing as a person, as an individual for my decision-making on and off the field."