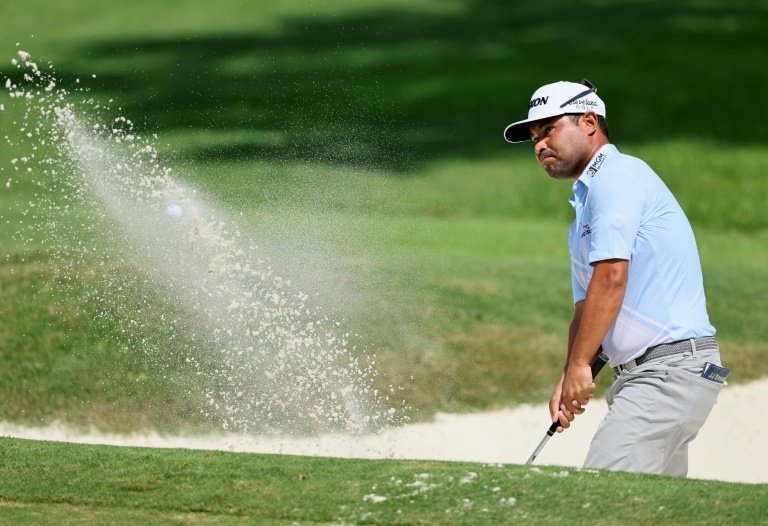 American J.J. Spaun plays a bunker shot on his way to a three-under par 67 that gave him a one-stroke lead after the second round of the St. Jude Championship / © GETTY IMAGES NORTH AMERICA/AFP

J.J. Spaun sank two late clutch putts to fire a three-under par 67 and take a one-stroke lead after Friday's second round of the US PGA Tour's St. Jude Championship.

The 31-year-old American sank a 13-foot birdie putt on his penultimate hole then closed with a seven-foot par putt to stand on 11-under 129 at TPC Southwind in Memphis, Tennessee.

"I feel good. It's exciting," Spaun said. "Still a lot of golf left. Just going to try to keep doing what I've been doing the last two days and hopefully it will pay off."

The tournament is the opener of the FedEx Cup playoffs, a season-ending trio of events with a winner's prize of $18 million.

Only 125 players qualified on season points and only the top 70 advance to next week's BMW Championship, where the 30 qualifiers for the Tour Championship in Atlanta are decided.

Spaun won his first US PGA title at the Texas Open in April after 147 tour starts and took aim at his second when he began on the back nine.

Spaun rolled in a birdie putt from just outside five feet at the first and chipped inches from the cup at the par-5 third to set up a tap-in birdie to seize the lead.

Spaun found a bunker off the seventh tee on his way to a bogey, but made a 13-foot birdie putt at the par-3 eighth and closed with another solid par putt.

"Took what the course gave me," Spaun said. "I worked on some good things in the past couple weeks that are starting to pay off. Got a nice feel with my swing and just trusting it. And the putter is working, too."

Straka birdied four of the last five holes to shoot 66.

"Hadn't played great coming into this week," Straka said. "But that's golf. You're going to have the ebbs and flows and just go with it."

Merritt sank an eagle putt from just inside 15 feet at the par-5 16th to shoot his second straight 65.

McCarthy, chasing his first PGA title, birdied three of the first four holes then holed out for eagle from 153 yards at the par-4 sixth.

"As I hit it I knew it was good. I didn't know it was going to be that good," McCarthy said. "Always nice to have a bonus hole out like that."

McCarthy found water on his approach at 18 and closed with a bogey to shoot 65.

Four-time major winner Rory McIlroy missed the weekend after a 69 to stand on 139, one over the cut line.

Top-ranked Masters champion Scottie Scheffler suffered his fourth missed cup of the season, a 68 leaving him on 139 as well, but he kept the season points lead.

South Korean Kim Si-woo, who shared the 18-hole lead with Spaun on 62, stumbled back with a 73 to stand on 135, as did reigning FedEx Cup champion Patrick Cantlay after a 68.