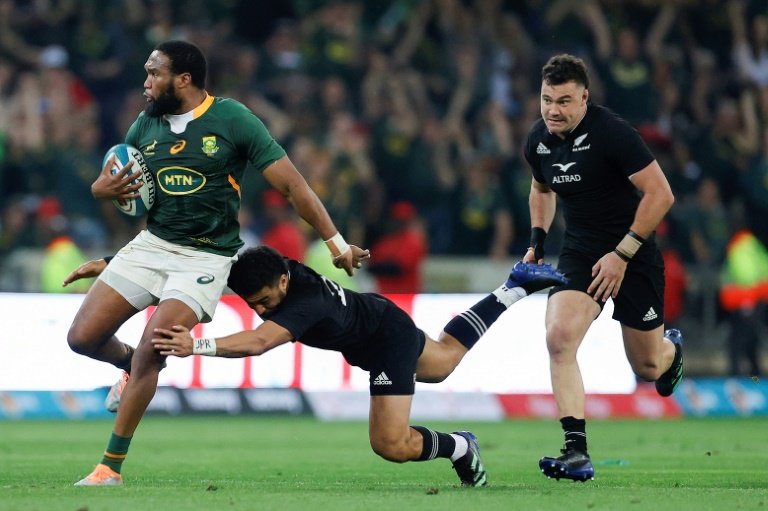 New Zealand relegated fly-half Beauden Barrett to the bench for a Rugby Championship clash with South Africa on Saturday as they seek to end a disastrous run of results.

The All Blacks have lost five of their last six matches, heightening media speculation that coach Ian Foster is facing the sack if he does not quit.

Richie Mo'unga comes in for Barrett in one of four changes to the starting line-up that lost 26-10 to the Springboks last weekend for the second-round match at Ellis Park in Johannesburg.

Mo'unga was introduced in the second half last Saturday and his presence led to a noticeable improvement by a team outplayed in the opening 40 minutes.

Barrett, who injured his neck late in the match after foul play by red-carded South Africa wing Kurt-Lee Arendse, has been included among the eight replacements.

The two brothers of Beauden, full-back Jordie and lock Scott, retained their places. Jordie was passed fit after recovering from an ankle injury.

There are three changes to the pack that began in Mbombela with props Ethan de Groot and Tyrel Lomax promoted after making significant impacts when they came off the bench.

They replace loosehead George Bower, now a replacement, and tighthead Angus Ta'avao, who drops out of the matchday 23 for the showdown between old foes.

The other alteration is in the back row where flanker Shannon Frizell, scorer of the only All Blacks try in Mbombela, takes the place of Akira Ioane, who will start on the bench.

"Belief and confidence remain high in our group, which is working incredibly hard this week," said Foster, who has lost nine of 25 matches in charge.

"Playing at Ellis Park is always a special occasion for any All Blacks team, and this weekend will be no different."

In a much-changed All Blacks bench only three of the Mbombela replacements -- lock Tupou Vaa'i, scrum-half Finlay Christie and back Quinn Tupaea -- hold their places.

The losses included going down 15-12 after extra time in the 1995 Rugby World Cup final, which was attended by then South African president Nelson Mandela.

Joel Stransky, whose drop goal won the final, will be at Ellis Park on Saturday as a SuperSport TV analyst.

Reigning world champions South Africa named their team on Tuesday and made five changes to the starting line-up, including recalling veteran No. 8 Duane Vermeulen.

The Springboks were later forced to make an alteration to the starting XV with hooker Joseph Dweba drafted in after Bongi Mbonambi was injured while training.