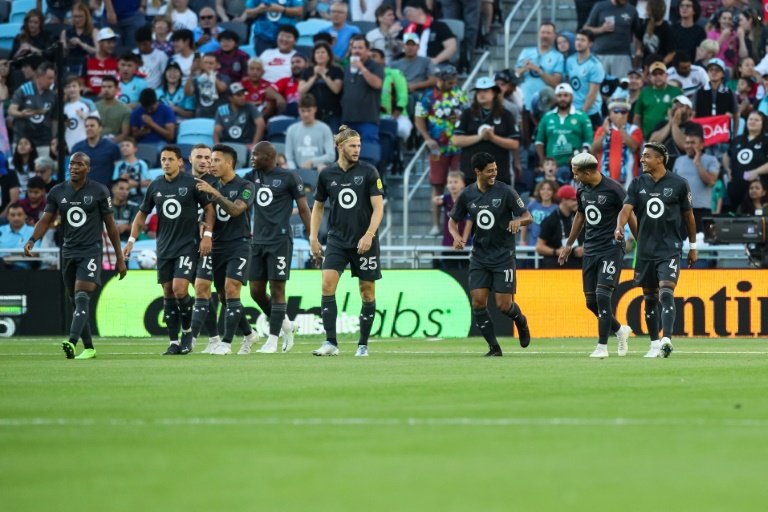 Members of the Major League Soccer All-Stars celebrate a goal by Carlos Vela in a 2-1 victory over the Liga MX squad in the MLS All-Star Game in St. Paul, Minnesota / © GETTY IMAGES NORTH AMERICA/AFP

Goals from Los Angeles FC star Carlos Vela and Seattle's Raul Ruidiaz lifted the Major League Soccer All-Stars to a 2-1 victory over their Liga MX foes for the second straight year in the MLS All-Star Game on Wednesday.

The MLS All-Stars got things going early at Allianz Field in St. Paul, Minnesota, where Vela headed home a cross from LAFC teammate Diego Palacios in the third minute.

Palacios split two Liga MX defenders then arced his cross over a crowded penalty box to Vela for the goal.

Ruidiaz doubled the score from the penalty spot in the 73rd minute after New England Revolution playmaker Carles Gil drew the foul in the penalty area.

Pachuca defender Kevin Alvarez pulled a goal back for the Liga MX side in the 85th, unleashing a long-range blast that eluded New York City FC keeper Sean Johnson.

But the Mexican outfit's frantic bid for an equalizer in the closing minutes came up short and MLS celebrated a win in the mid-season exhibition for the second straight year.

The match featuring top players from the neighboring leagues, played before a crowd of 19,797, boasted plenty of intensity for a mid-season friendly.

Less than three minutes had passed before the MLS side had survived a VAR review for a handball, with Walker Zimmerman cleared of the infraction.

Minnesota United's Dayne St. Clair gave home fans something to cheer with a diving save of a rocket from Pumas UNAM forward Juan Dinenno, which kept the lead at 1-0 going into halftime.

St. Clair replaced Andre Blake in goal in the 32nd minute and made four saves on the way to being named Man of the Match.

"I was definitely a little bit surprised," he said of receiving the accolade. "Normally it's the guys who contribute to the goals who get the award, but I'm definitely very happy."

He noted that 2023 will see plenty of competition between the leagues with the expanded Leagues Cup, which will feature all the clubs in both leagues with CONCACAF Champions League berths on the line.

"We'll see what next year in Washington DC looks like when DC United hosts (the All-Star Game)," Garber said.