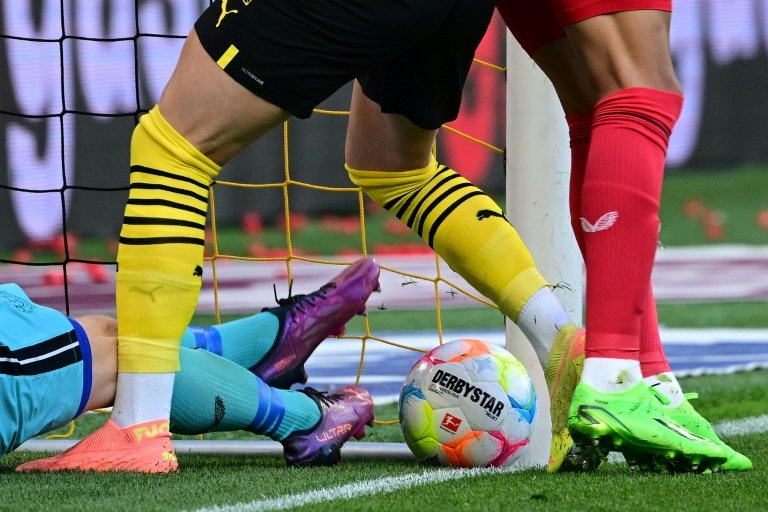 Over and out: Dortmund's Marco Reus helps the ball over the line / © AFP

A first-half goal from captain Marco Reus was enough to see Borussia Dortmund past Bayer Leverkusen in the Bundesliga on Saturday while Union Berlin defeated city rivals Hertha.

In a fixture known more for attack than defence in recent years – three of the past five games between Dortmund and Leverkusen have featured seven goals – it was highlighted by defence, particularly that of Dortmund newcomer Nico Schlotterbeck.

After a nervy opening, the home side took the lead in the ninth minute when Reus finished off a slick team move kick-started by aggressive pressing from 19-year-old England international Jude Bellingham.

Bellingham poked the ball into the path of Dortmund's 17-year-old striker Youssoufa Moukoko, who glided a pass across the face of goal to Bundesliga debutant Karim Adeyemi.

Lukas Hradecky half-saved Adeyemi's shot, before Reus forced it over the line.

In stoppage time, Hradecky was red-carded for handling the ball outside the area.

Coaching in front of a sold-out Westfalenstadion for the first time, Dortmund manager Edin Terzic said the 82,000 fans gave his side the edge.

"It was a very intense game and the crowd helped us through, giving us impetus and an extra metre or two when we needed it."

American striker Jordan Siebatcheu scored on his Bundesliga debut as Union Berlin cantered to a 3-1 home victory over Hertha. 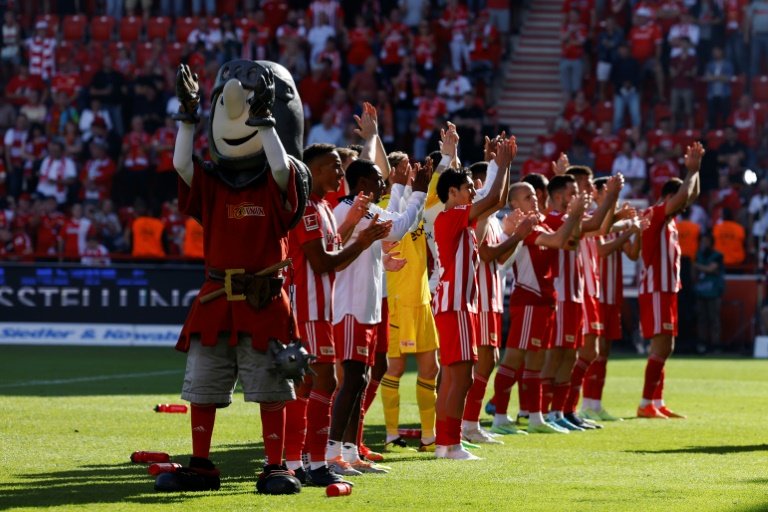 Brought in over the summer to replace Nottingham Forest-bound Taiwo Awoniyi, Siebatcheu glanced a Sheraldo Becker cross past Oliver Christensen to put Union ahead in the 32nd minute.

Becker added the second goal in the 50th minute, before Robin Knoche headed in a Christopher Trimmel corner four minutes later to put the result beyond doubt.

Union have now won four in a row against their big brothers from the city's west and have only lost twice from seven Bundesliga clashes since being promoted to the top division in 2019.

"For the fans it is an important game, but me, I am a bit more pragmatic and realistic," said Union coach Urs Fischer.

"For me, it's about the three points. When you win games, you gain trust in yourself and (improve your) self-confidence."

Hertha coach Sandro Schwarz said the derby loss was "irritating" but that his side had the quality to bounce back next week.

Werder Bremen celebrated their return to the Bundesliga after a year in the second division by snatching a point in a 2-2 draw at Wolfsburg. 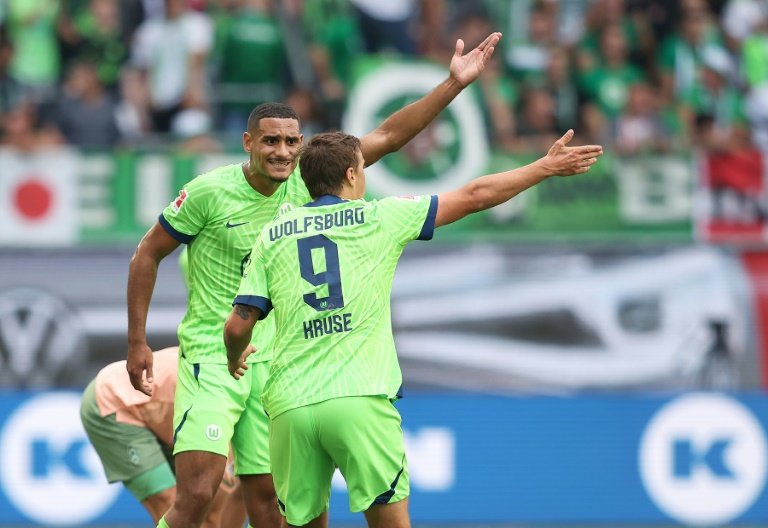 Bremen hit back with two quick goals through Niclas Fuellkrug and Leonardo Bittencourt to take a lead into half-time.

Kovac brought on Max Kruse in the 76th minute with his final change.

Kruse, who scored 35 goals in 94 games with Werder, quickly created an equaliser, steering a cross into the box for Josuha Guilavogui to hammer home.

Borussia Moenchengladbach got off to a winning start under new manager Daniel Farke, beating 10-man Hoffenheim 3-1 at home.

Hoffenheim took the lead in the 25th minute through Robert Skov just after defender Stefan Posch received his second yellow card, but were unable to hold on.

Michael Gregoritsch scored just seconds after half-time, before dead-ball specialist Vincenzo Grifo added another to put Freiburg 2-0 up in the 47th minute.

Summer arrival Matthias Ginter added a third in the 61th minute, before fellow new recruit and Japanese international Ritsu Doan added a fourth in the 78th.

On Friday, defending champions Bayern Munich got their quest for an 11th successive title off to the best possible start, routing Eintracht Frankfurt 6-1.