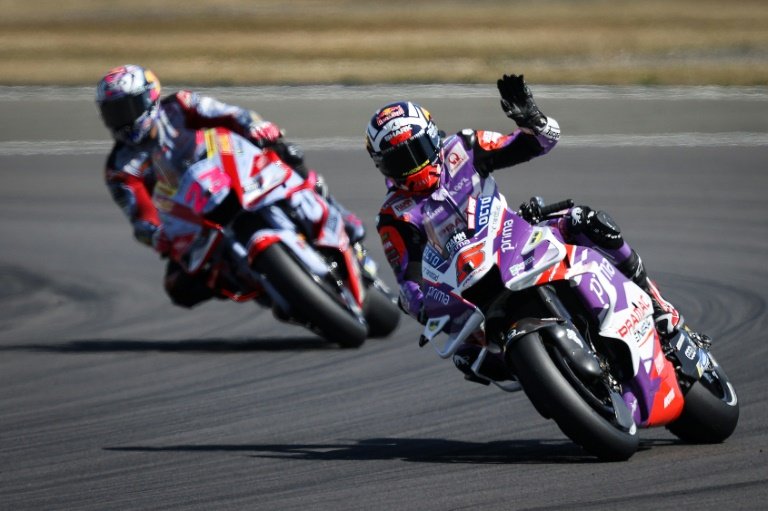 Ducati's French rider Johann Zarco clocked a new track record to grab pole for the British MotoGP in qualifying at Silverstone on Saturday as Aleix Espargaro took an honourable sixth after a high-speed crash.

Zarco claimed his second prime grid position of the season and eighth in MotoGP in style with a lap of 1min 57.767sec to smash the former track record of 1min 58.168sec set by the absent Marc Marquez.

"It's a mythical circuit and it makes me proud to feel comfortable around it," said the man of the moment who has given himself the perfect platform to land his maiden MotoGP success.

Asked at the post-race press conference whether it could be a case of a maiden MotoGP win at the eighth time of setting off from pole, the 32-year-old smiled and replied: "Why not?"

"I want this win, but I don't want to only think about that, and then make mistakes.

"We'll see how strong the others are, I hope to use the advantage of a hard rear tyre to help me have a perfect present at the finish."

Zarco, who rides for Ducati's satellite Pramac team, is joined on the front row for Sunday's race by Maverick Vinales of Aprilia, just 0.098sec behind, and Jack Miller on a factory Ducati.

World champion and series leader Fabio Quartararo took fourth on the grid for this 12th round of the 20-race season.

The French rider must serve a long lap penalty during the race as punishment for a collision with Espargaro at Assen before the break.

The Yamaha star said that after putting together one of his best qualifying laps of the season "I had nothing else to give".

"I'm happy with my race pace from final practice so that's very positive," he added.

"Our pace means we will be fighting for the win, but with my penalty I can't say where I'll end up finishing."

Quartararo has for company on the second row the Ducati of Francesco Bagnaia and Espargaro's Aprilia.

This was a stoic performance from Espargaro who competed in qualifying despite suffering a heavy fall earlier in the day.

The 33-year-old, who had just set the fastest time in the third practice session, flew off his bike entering a fast corner at 115mph (185km/h) in the fourth session.

Medics rushed to his aid, moving him on to a stretcher. But in spite of being visibly stunned by the impact, Espargaro was able to walk to the medical centre, albeit with support on either side.

He sits 21 points behind Yamaha's world championship leader Quartararo heading into this first race since the mid-summer break, with Zarco third, a further 37 points adrift.

Quartararo won here last year and is trying to break a statistical oddity of the British MotoGP.

Former Silverstone lap record holder and six-time MotoGP champion Marquez, meanwhile, is continuing his recovery from a latest stint of surgery on the broken arm he suffered in a crash in the Spanish Grand Prix in 2020.

He is due for an important medical check-up in mid-August after which an idea of when he can return to his day job should become clearer.