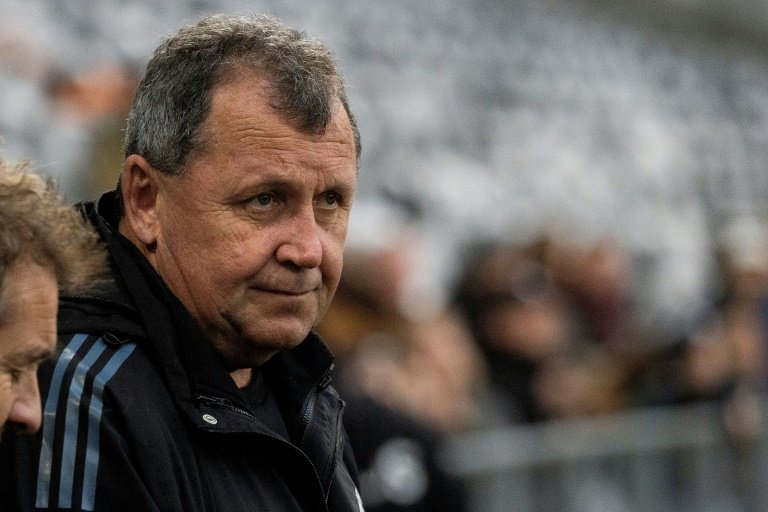 Ian Foster has downplayed the pressure mounting on him as New Zealand coach, saying that all his focus is on beating Ireland in the series-deciding third Test / © AFP

Ian Foster has downplayed the pressure mounting on him as New Zealand coach, saying on Thursday that all his focus is on beating an outstanding Ireland in the series-deciding third Test.

Veteran lock Sam Whitelock is a key figure returning to the pack after missing the second Test with concussion symptoms.

Prop Nepo Laulala and exciting Canterbury Crusaders backs Will Jordan and David Havili are the other recalled players to the starting side beaten 23-12 in last week's second Test in Dunedin.

The tourists have made just one injury-enforced starting change to the team who notched a first Ireland win over the All Blacks on New Zealand soil, with Bundee Aki restored at inside centre.

He replaces the injured Garry Ringrose, with Robbie Henshaw moving out one place in the midfield.

Captain Johnny Sexton was cleared to start at fly-half after shaking off a knee niggle that forced him off late in Dunedin while influential flanker Peter O'Mahony successfully completed his head assessment protocols after taking a knock during the second Test.

Victory for Ireland would provide more ammunition for critics of Foster, whose record since succeeding Steve Hansen in 2020 has been modest by New Zealand standards and has prompted a growing call that he be replaced before next year's World Cup.

Foster said he was aware of the public sentiment, saying "you certainly get used to it", before diverting attention to the task at hand.

He said there had been a deep period of introspection since what he described as an "unacceptable" performance in Dunedin and believed his players would be primed to counter the compelling strength of the tourists.

"Internally, there's a lot of reflection in what we're doing," he said.

"Then you get into gear and start really nailing the next week. So that's where I'm at, I can't wait.

"Everyone is learning that this is a high quality team we're playing against, it's a great examination for us. We have to show that we're smart and we're learning as well.

"This is where you want to be in terms of the excitement."

Jordan starts on the right wing, forcing Sevu Reece to the left wing, where Leicester Fainga'anuku has been dropped.

A scorer of 18 tries in 14 Tests, Jordan notched another with a late consolation off the bench in Dunedin, having missed the first Test with Covid-19.

Canterbury Crusaders teammate Havili has also overcome Covid and is a straight swap for Quinn Tupaea at inside centre.

Only one change has been forced on Foster, with 40-Test tighthead prop Laulala replacing the suspended Angus Ta'avao, who was sent off for a high tackle in Dunedin which inflicted the tour-ending head injury on Ringrose.

Laulala missed the first two Tests while nursing a neck complaint and his starting recall means Ofa Tu'ungafasi drops to the bench.

Evergreen lock Whitelock will play his 134th Test after recovering from concussion symptoms that sidelined him from the second Test.

It pushes Scott Barrett back to flanker, where he shone in the 42-19 first Test win in Auckland.

Ireland coach Andy Farrell said he expected the All Blacks to be desperate but also anticipated his team will be improved, having had three weeks on tour to lift their game.

"I think the best part of where we're at is that we know we can do better," Farrell said.

"What we've done pretty well over the last period of time is have a clear understanding of what our game is all about, and it becomes more clear and obvious, the more we push on together.

"Albeit we had a decent result in the last Test, hopefully our best is saved to last."