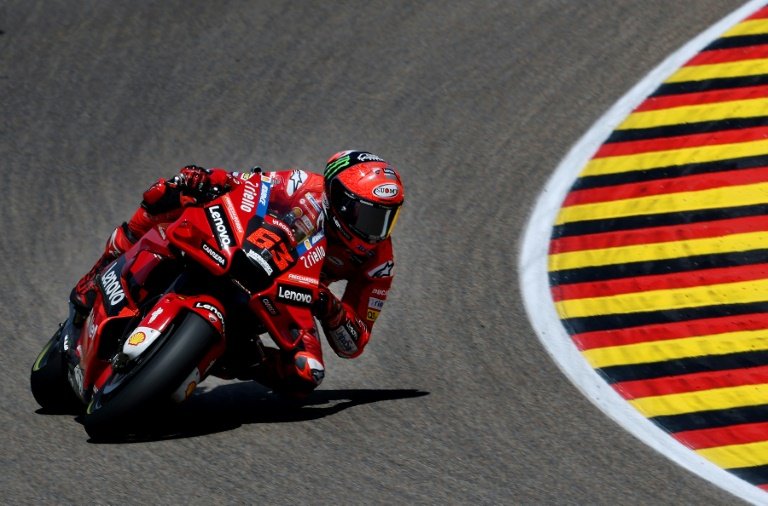 The Frenchman, who leads the standings by 34 points after 10 of 20 races this season, sets off second on his Yamaha with Spain's Jorge Martin (Ducati-Pramac) completing the front row.

It is the fourth time in six races Bagnaia has claimed pole, but he has failed to finish in three of his past four outings.

"Pecco has just been incredible, like usual in qualifying," said Quartararo. "I did my best so I'm happy, our rhythm is good for tomorrow."

Bagnaia has won his last two completed races -- at Jerez and Mugello -- but was visibly angry last weekend after crashing out of the German MotoGP, where Quartararo took the chequered flag.

Ducati bikes have been fastest in eight of the 11 final qualifying sessions this season, but the Italian manufacturer has struggled to get its riders to the line.

Bagnaia, runner-up to Quartararo last year, had looked poised to challenge for the title just a few weeks ago, but has since slipped to 91 points off the pace.

Quartararo was quickest in Saturday's final practice session, but Bagnaia pulled back in front in qualifying as he set another new lap record of 1min 31.504.

Aleix Espargaro (Aprilia) and France's Johann Zarco (Ducati-Pramac), second and third in the championship respectively, will set off in fifth and seventh place on Sunday.

After victories in Barcelona and Germany, Quartararo is chasing a third consecutive triumph heading into the summer break.

The 23-year-old has managed just one pole position in the first half of the campaign but is the only rider to place in the top 10 of every race so far.

Quartararo won at Assen last year and finished third in 2019.