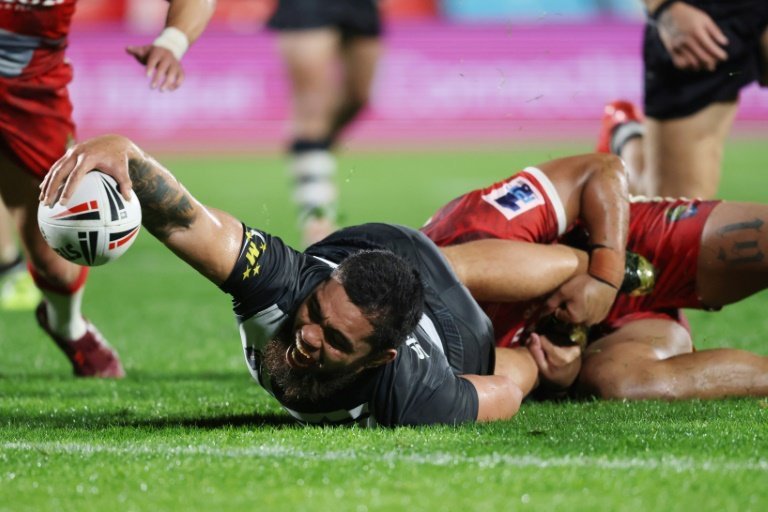 Both teams hailed the return of international rugby league after New Zealand outclassed Tonga 26-6 on Saturday in their first Test for nearly three years.

The Kiwis dominated the match at a damp Mt Smart Stadium in Auckland, scoring four tries and justifying the number one ranking they will take into this year's World Cup.

Wintry conditions did not dampen the enthusiasm among a sold-out crowd of 26,000 mainly Tonga supporters, starved of an international game that went into hibernation during the coronavirus pandemic.

Rugby league officials found a way to keep running their primary professional club competitions -- Australia's National Rugby League and England's Super League -- but only one men's Test between major nations has been played since 2019, with France hosting England last October.

Before Saturday's match, New Zealand coach Michael Maguire said he feared the pandemic had sucked some appeal from what he believes should be the sport's pinnacle.

"You probably can't really measure what it has done to the game," he said.

"The international community needs to make sure they get it going again now. Everyone's got a responsibility to do that... the NRL, everyone."

The occasion was not lost on Kiwis captain Jesse Bromwich after full-time.

"It's really nice to be home, the atmosphere is crazy. Rugby league's back in New Zealand again and it's great to be part of it all," he said.

Tongan counterpart Jason Taumalolo is one of the NRL's leading players but has always wanted more emphasis placed on Test matches and promoting the sport in his home nation.

"Three years is too long to be coming back here to Auckland and seeing the red sea (crowd) again," he said.

"Win, lose or draw, to see the red flags flying, there's no better feeling. It's a blessing."

New Zealand dominated from the outset, scoring two of their tries inside the first eight minutes through Jahrome Hughes and Jordan Rapana.

Sione Katoa responded for Tonga before Ronaldo Mulitalo pushed the home side 20-6 clear at half-time, off an assist from fellow Test newcomer Dylan Brown.

Isaiah Papali'i scored the only try of the second half but his New Zealand team could have racked up more, dominating territory via halfback Hughes' superior tactical kicking game.

Both teams will be among the favourites for the rescheduled October-November World Cup in England, which was postponed last year when holders Australia and New Zealand pulled out because of Covid fears.

The New Zealand side are also building towards the sixth edition of the women's World Cup, an eight-team tournament which will run concurrently with the latter part of the men's 16-nation event.