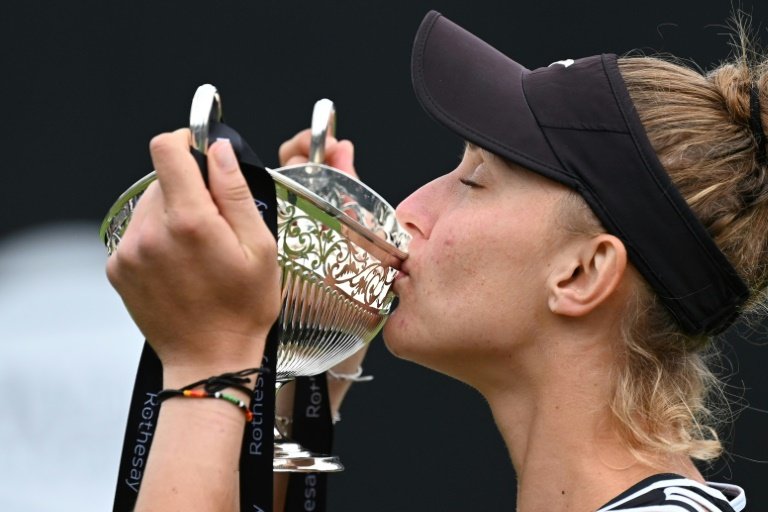 An emotional Beatriz Haddad Maia won her second title in seven days after Zhang Shuai retired in the final of the WTA Birmingham grass-court event on Sunday.

Haddad Maia was 5-4 up in the first set when her Chinese opponent indicated she could no longer play on.

Both players had come through tough semi-finals earlier on Sunday against two Romanians, with Haddad Maia defeating former Wimbledon champion Simona Halep and Zhang seeing off Sorana Cirstea, after rain had washed out Saturday's play.

Haddad Maia has now won her last 10 grass-court matches, having lifted another trophy in the English Midlands at the Nottingham Open on June 12.

It is all a far cry from 2020 when Haddad Maia was given a 10-month doping ban despite a panel accepting her positive test was down to a contaminated supplement and that she had no significant fault for the finding.

Now she is set to rise to 29 in the world rankings and be seeded at Wimbledon when the last of tennis's four majors played on grass starts in eight days' time.

Haddad Maia, 26, thanked her support team during Sunday's presentation ceremony, saying: "We came from a title last week and it wasn't enough.

"They were pushing me, trying to break the limits and be stronger every single day. I wouldn't have this trophy without them."

She added: "Nobody knows what we went through the last two years. It was something that I couldn't explain. One year ago I was playing a final in a (bottom tier) 25K (tournament).

"If I didn't have this power, this determination, it would be impossible. I'm really happy that I'm here with everybody here watching me play. Everything I passed through in my life just made me feel stronger."

It was Zhang, however, who made the better start to Sunday's final before Haddad Maia fought back.

After the ninth game of the first set Zhang, who also played a doubles match indoors on Saturday, called for the trainer and received treatment for a neck injury before deciding she was unable to continue.

"It was really tough to play after two-and-a-half-hour singles and also I played already seven matches this week," Zhang said.

"I'm really tired. Really tough to play indoor hard court and back to grass. My body is not working any more. Sorry."